This post is one of those leftover dishes that’s amazingly versatile and will eat up any leftover veggies you might have laying around at home, don’t be afraid to experiment, just chuck in whatever you’ve got! It also puts a slight spin on the traditional tray bake recipes, using wholemeal bulgur wheat to create a bulgur bake that’s a highly tasty and filling not to mention vegetarian and vegan to boot.

I once heard a fabulous term, it was the definition of a dish created by using up what is left in the fridge. It was perfect. It was so good that I’ve never been able to remember it since that day I read it. One could argue it was perhaps not quite as perfect as I’m proclaiming, if my memory serves me so awfully for something that was allegedly so precious.

However, some of the best dishes I’ve created came about not through consternation and deep thought at the sharp end of a fountain pen or laptop, but simply by bumbling through the cupboard and fridge and pulling out the things that seem appealing without really thinking about it. It’s as if the subconscious flavour receptors in my brain work better when under no pressure than when they are being pushed around and forced to come up with a spellbinding combination of flavours. Today’s dish is one of those very leftover masterpieces, created through an excess of ingredients and with the lingering flavour of a Yotam Ottolenghi recipe still fresh in the back of my mind. 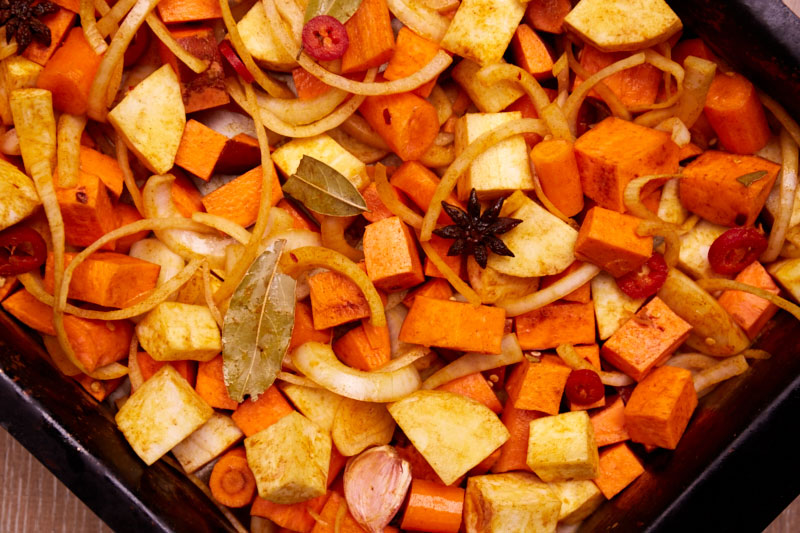 I have Yotam Ottolenghi to thank for many things, my love of vegetarian food is one, because as a devout omnivore I must concede that prior to buying a copy of ‘plenty’ I was under some quite deceptive illusions regarding what vegetarian food really was. Of course, vegetarian food is simply food without meat, foregoing nothing more than simply the attendance of animal protein, rather than the narrowly defined corridor of bland, flavourless cuisine which I seemed to think it was previously. I also have to thank him for the vast expansion of my knowledge of ingredients, as there’s one thing he doesn’t fight shy of is layering up flavours and tastes within his recipes, often using distinctly un-English ingredients, to the point that it became an easy target for mocking his ingredient lists.

However, I now have a good stock of most Ottolenghi ingredients so I recently decided to make his Ultimate Winter Couscous which consists of a mighty 23 ingredients, which doesn’t particularly do him any favours in the mocking department. However, his ability to combine so many flavours into a glorious dish is second to none, so I’m more than happy to indulge my spice cupboard to make recipes like this, because it’s absolutely worth it and a large ingredients list doesn’t equal a difficult dish. 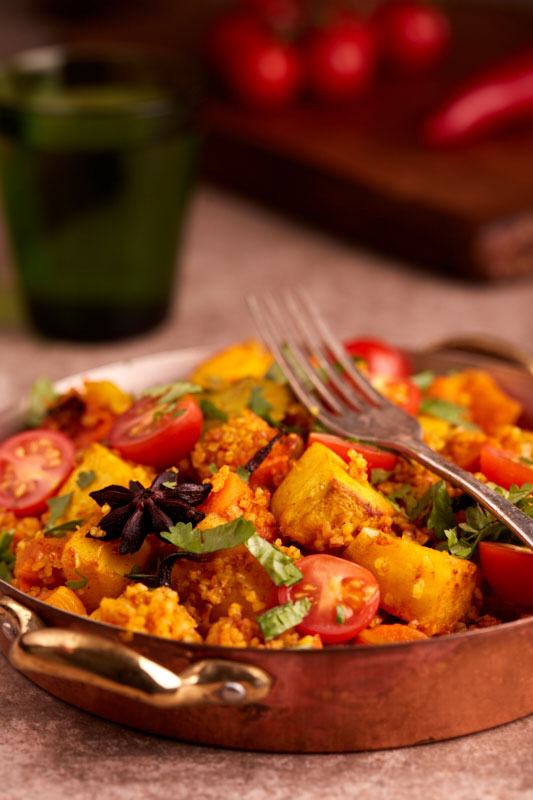 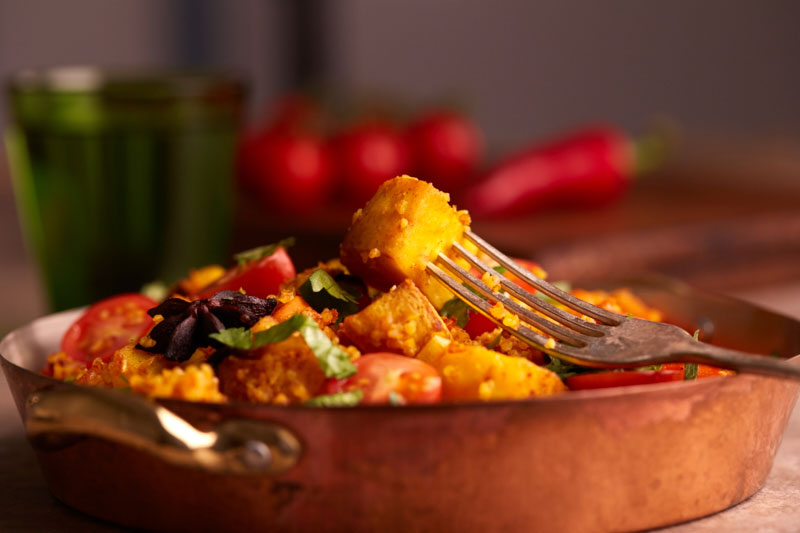 A few weeks after making the above dish, I was looking to my fridge and cupboard for the ingredients to create a dinner. What I found was exactly what I needed, a paired down version of Chef Ottolenghi’s ultimate cousoucs, using a mere 17 ingredients rather than his 23. OK, that’s still quite a lot, however it tastes pretty damn epic to my mind so I’m happy to throw them all in. I’ve also simplified the whole process, making this a one pan wonder, the whole lot just being baked in one dish, making those 17 ingredients disappear behind a well hidden haze of relative simplicity.

The things I love about this dish are the cinnamon, which is utterly fabulous on roast vegetables, adding a delicious warmth to the dish, which when combined with star anise and the sweetness of some dried apricots just nails the range of flavours that I love. It’s also a dish that’s versatile, I would heartily encourage the use of whatever combination of root vegetables you have laying around, the more the merrier, they’ll all work. 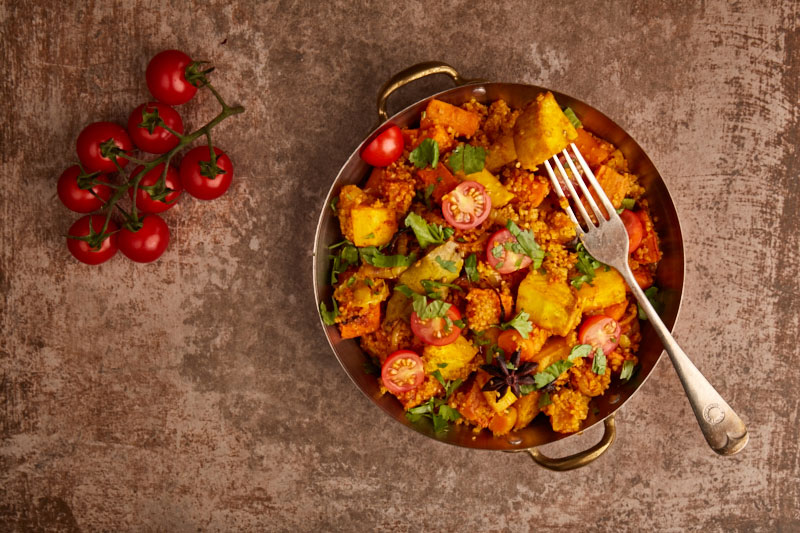 This recipe is very versatile and it’s primary intent is to be extremely flexible and easy to make, being put together in one tray.

The type of vegetables you use and the way you chop them is unimportant. The preparation of this dish is unfussy and swift, prepared in one large baking tray, you could even serve it in the same dish straight from the oven. The cooking is separated into two stints in the oven, that’s it. This is a dish for a Sunday night, when you’re sweeping the fridge for things to use and want a tasty dish but spend as little time as possible preparing it.

Chop the vegetables into pieces around 1cm x 2cm, leave the skins on.

If your baking tray is piled high, you should separate it out into two separate trays. The vegetables will not cook properly unless they are in a single layer.

Place in the oven and cook for 45 mins, stirring once around halfway.

Measure the bulgur, apricot and harissa into a bowl and prepare your tomatoes and coriander, so that you can clear up in the kitchen.

Once the 45 minutes are up, add the bulgur, apricot and harissa, stir well, then pour over the boiling water, and return to the oven and cook for another 15 minutes.