A glut of courgettes has descended on our world. If you grow your own you’ll found the cheeky blighters hiding behind leaves and sneaking up on you. Even if you don’t grow your own, you can walk into a supermarket and pick up a large pack for very little because they are one of the most abundant vegetables in the UK at this time of year. Today’s recipe makes use of these abundant, seasonal vegetables, with a courgette and orange salad loaded on top of the stale bread you’ve got hanging around. It’s a powerful and bright salad that works beautifully on it’s own or would sidle up beautifully with a piece of grilled white fish or some halloumi slices grilled to squeaky perfection. 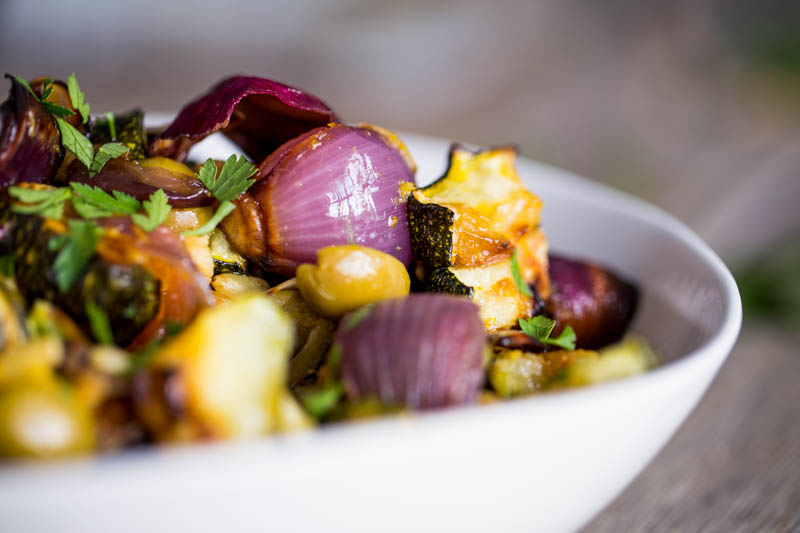 On The Road Again.

My life is on the move, yet again, I’m moving house next week.

As I pointed out last week, it will be my fourth place of residence in the two years that I’ve been a blogger. I’m off to find elysian fields of joy and exploration, otherwise known as Wanstead Flats in the depths of East London. I’m attempting to train my dog to do my packing for me, but it’s not going particularly well as he prefers to deconstruct cardboard boxes into small, torn pieces, rather than put things into them, carefully seal them up with brown tape, before finally labelling with it’s destination room. He’s far happier dozing on the sofa or fiercely guarding the world from the scourge of post, newspapers and cardboard boxes than he is attempting to wrap crockery in bubblewrap. And they told me that poodles were clever.

Moving house so often does hold benefits, because every time it happens, it forces a re-evaluation of the items that are moved. It cuts down the chaff, ensuring the prized possessions to be lugged around hold highly luggable credentials. Until recently I had an un-evaluated store of university related guff at my parents house, which held very little relevance to my life today. It’s unlikely I’ll ever sit down one Sunday afternoon and decide to read about the intricacies of PIC microprocessor programming just to unwind. I struggled with it back then, when someone was telling me what to do, so I doubt that 15 years later it’s going to be of any use. 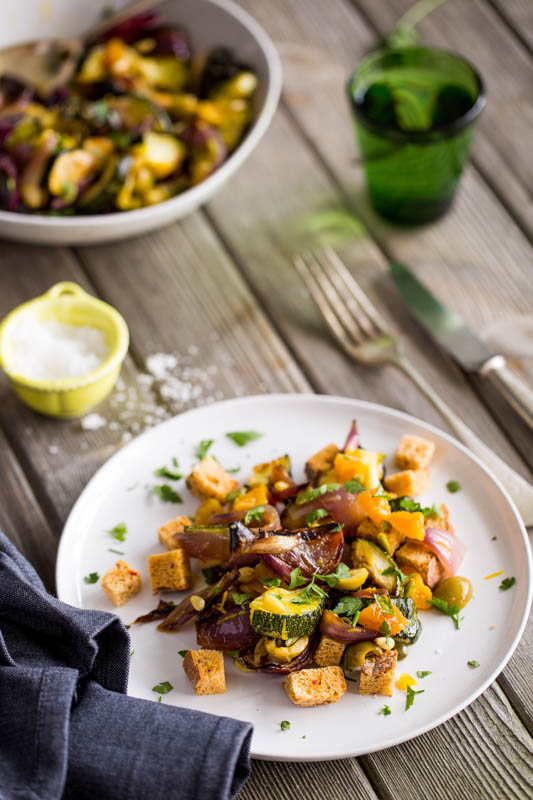 It’s All About Me.

I’m actually really happy about this move, it’s the first time I’ve bought a property ON MY OWN.

I’ve got a solid history of purchasing properties with girlfriends, before continuing an ultimately unsuccessful relationship with them, only to sell the property at a later date. This is actually my third flat, but the first that’s been all mine, in a location chosen only by me (well, OK, the pooch did help a little bit by sniffing around) and without any outside influence over what the requirements are. In that respect it’s a revelation, having been chosen utterly, completely and selfishly for my own ends, it’s all mine, with no-one else to consider. I’m sure I’ve said before that making major life choices based on what I think other people might want is a direct course to misery, so having gone down this route and running away to hide on the other side of London feels particularly liberating.

Unbelievably, the blog will be completely intact through this process, I’ve created a store cupboard full of posts, so there should be an uninterrupted service over the next few weeks. In theory. 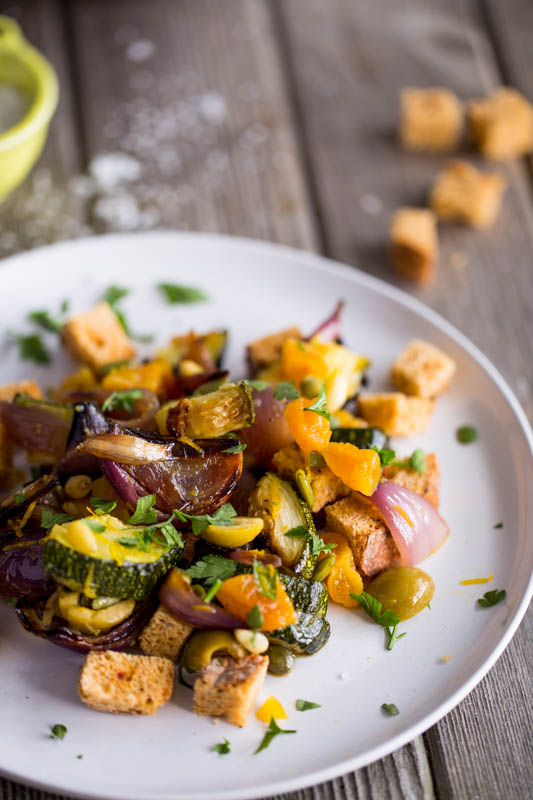 Woah there. Courgette and orange salad? Who would have thunk of such a wild combination of flavours? It’s inspired by a recipe which I saw many years ago feature orangey topped courgettes, this time I’ve re-imagined it into a hearty plateful of salad. It works like a dream, that citrussy dressing that everything sits in and imbibes really works beautifully with the rest of the ingredients. The nippy sweetness of the dried apricot keeps the tart orange juice in check, the roasted red onions add the warm mid tones of sweetness and everything else just gets along like a house on fire.

When I first made this salad, the orange dressing swilled around the bowl and it looked like I’d over-egged it with the fluids. But the flavour was spot on, so I thought, who am I to judge? I ate half of it, leaving a bowlful of courgettes and orange salad in the fridge for the following evening’s dinner (tea, just in case that’s confused any northerners). Over the next 24 hours, the remaining dressing and juices suctioned themselves up into the salad and the whole thing tasted beautiful still, a mighty feat for a salad that’s been left in it’s dressing for 24 hours. 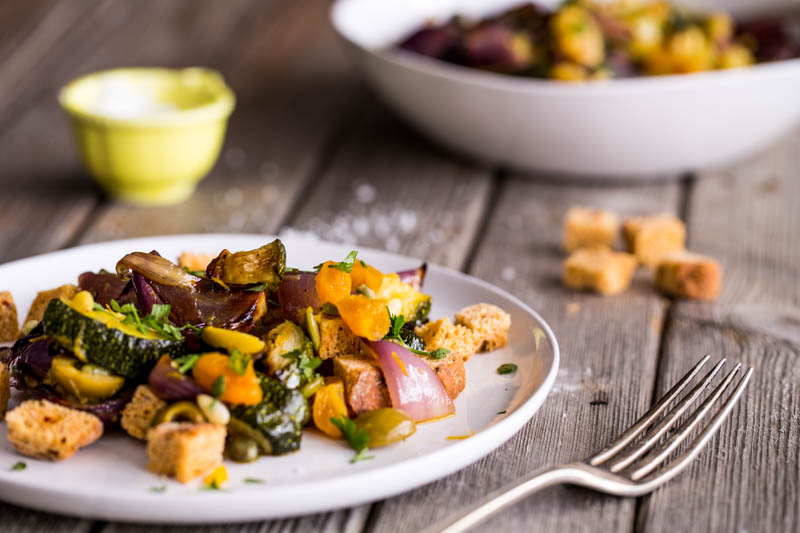 Serves 2 as a main, 4 as a side
Takes 1 hour 10 minutes
Uses two baking trays and a bowl

Place the courgette and onion in a baking tray, mix with 2 tablespoons of extra virgin olive oil and season well with salt and pepper. Place in the oven and cook for 50 minutes, stirring at halfway.

In a bowl, mix the orange juice, zest and 2 tablespoons of extra virgin olive oil, then add the rest of the ingredients, except the bread.

Spread the chopped bread out on a baking sheet. When you remove the courgette from the oven after 50 minutes, turn the oven off and place the bread in the oven, close the door and leave until you are ready to serve. Add the courgette and onion mix to the other ingredients and mix well.

At this point, you can leave this salad to one side, ready to serve at your leisure whenever you wish. When you want to serve, scatter breadcrumbs on a plate and top with the courgette mixture.