Today’s post is about creating luscious slithers of pepper, roasted with balsamic vinegar and garlic to create rich, sweet antipasti style balsamic roasted peppers. These are incredibly easy to make if you forego the peeling, but if you want the ‘perfect’ experience then you need to peel them, just make sure you’ve dialled in your patience levels on that particular day. 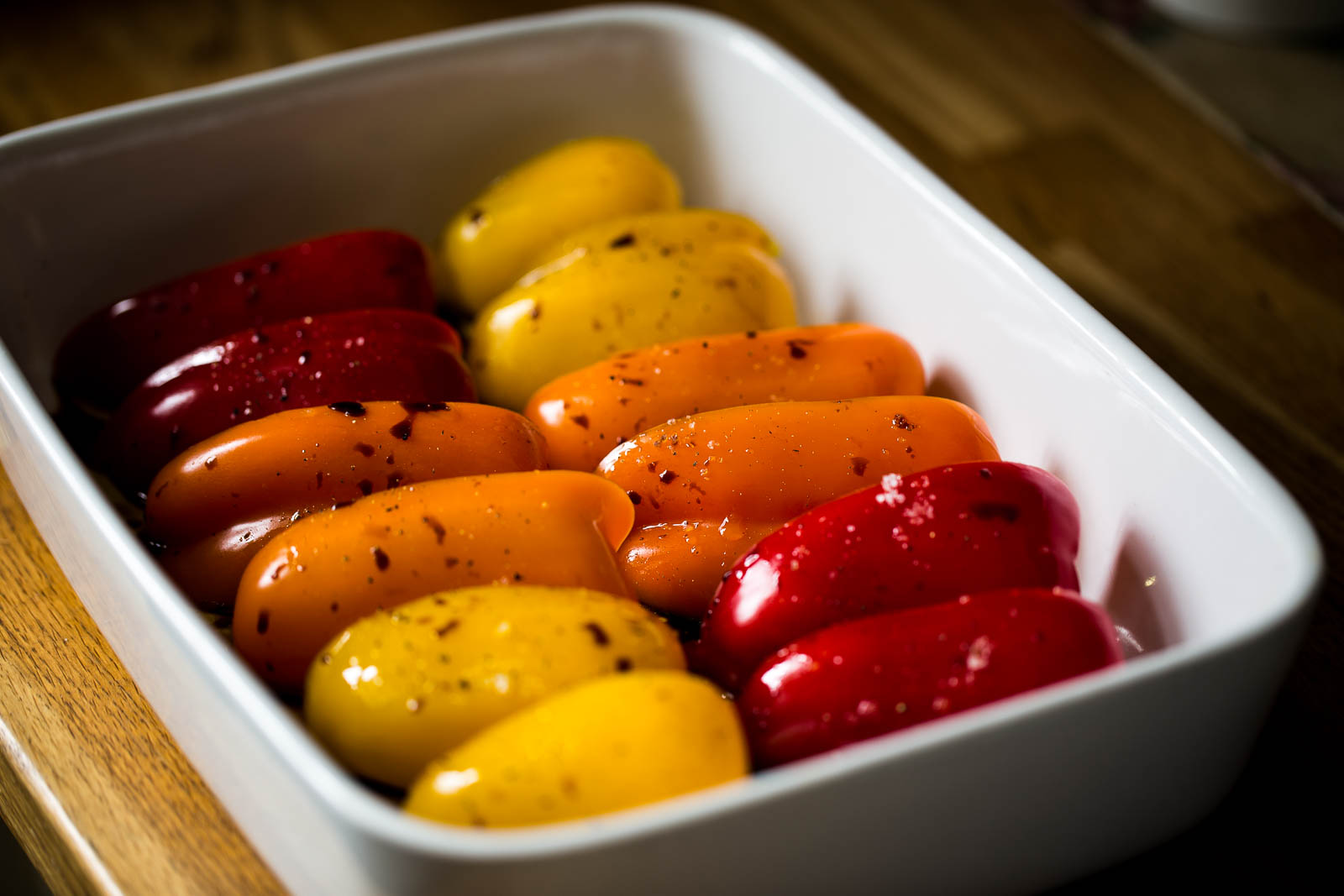 I woke up early today. I’ve got a meeting with a website developer about a the ongoing development of the bloggerskillsacademy site I’m creating. The whole process has drifted slightly and I feel we need to kick some life back into it and get on track. I get nervous about confrontation with people, so having to exhibit some doubts about the way things are progressing seems like a mammoth hurdle to me.

I get up early anyway, my alarm goes off at 5.40am, at which point I jump out of bed and insert myself directly behind my desk, where I write three sides of A4 about the first things that come into my head. If you’ve not heard of this practice before, they’re known as ‘morning pages’ and were extolled by Julia Cameron in her book The Artist’s Way as a brilliant exercise for cognitive cleansing, to help clear the junk out of your mind before the day begins. Anyway, I was awake and ruminating over the context of my meeting this morning, comfortably before my 5.40am alarm cast it’s gentle light on the wall and started tweeting it’s dawn chorus. 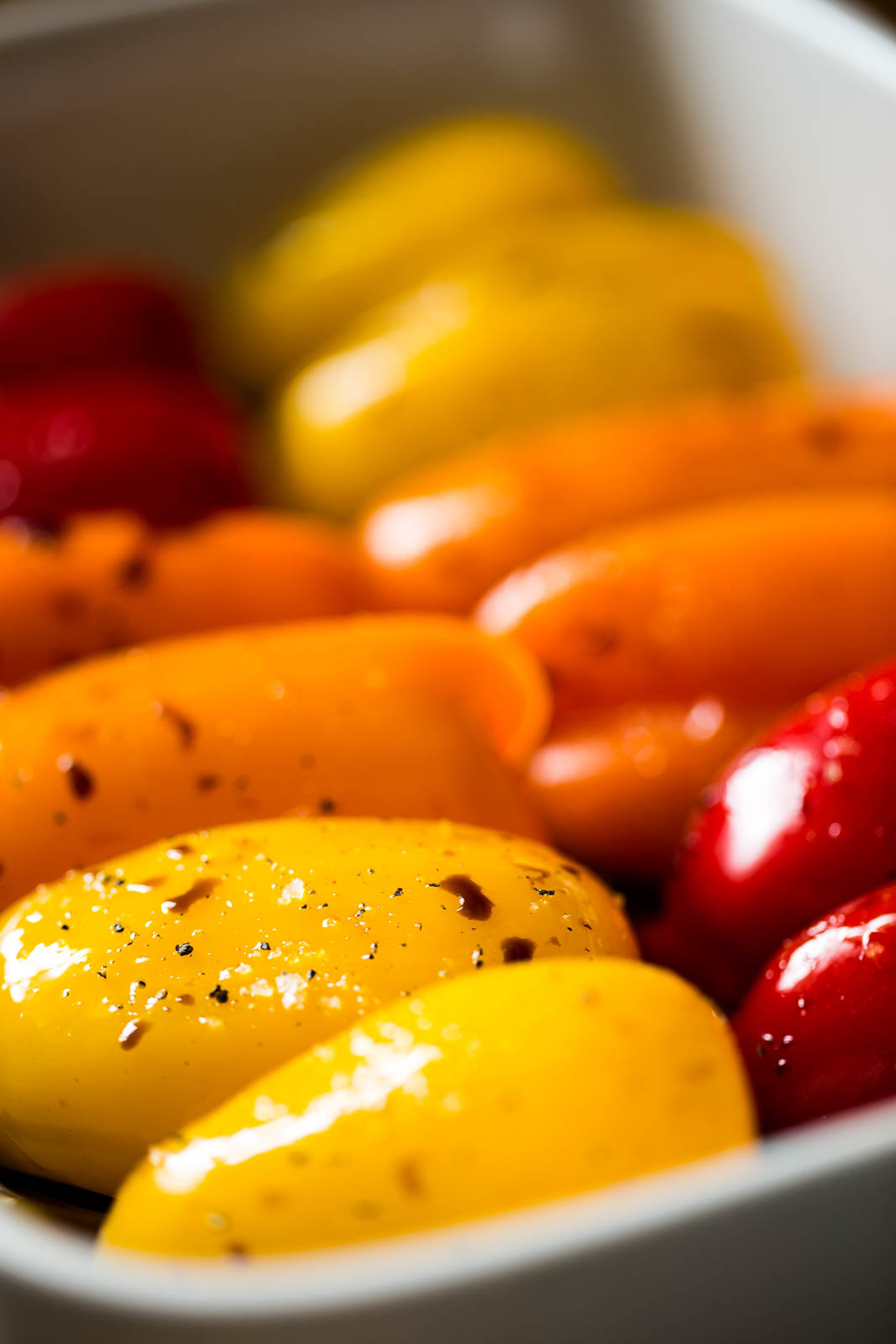 I’m only comfortable at confrontation if it’s fuelled by anger, in which case I’m happy as Larry, whoever he is, but being angry doesn’t get the best results out of people, so best avoided. [Edit: I have just checked online and Larry was a boxer in the 1890s who won an enormous purse from a fight, so it’s quite apt that I’m perfectly happy confronting people when I’m basically up for a verbal fight. Larry, indeed]. I knew the project was drifting astray, but I seem to have a deep seated fear that I can only raise an issue with someone if I have some form of technical evidence to back it up. As if saying “You’re not doing it how I want” alone, simply isn’t a valid reason, I feel I need facts as well, such as “this has delayed the launch”. Or “I’m not happy with this” feels like an insult, so I have to add “because you’ve not done precisely XYZ that you said you would”. 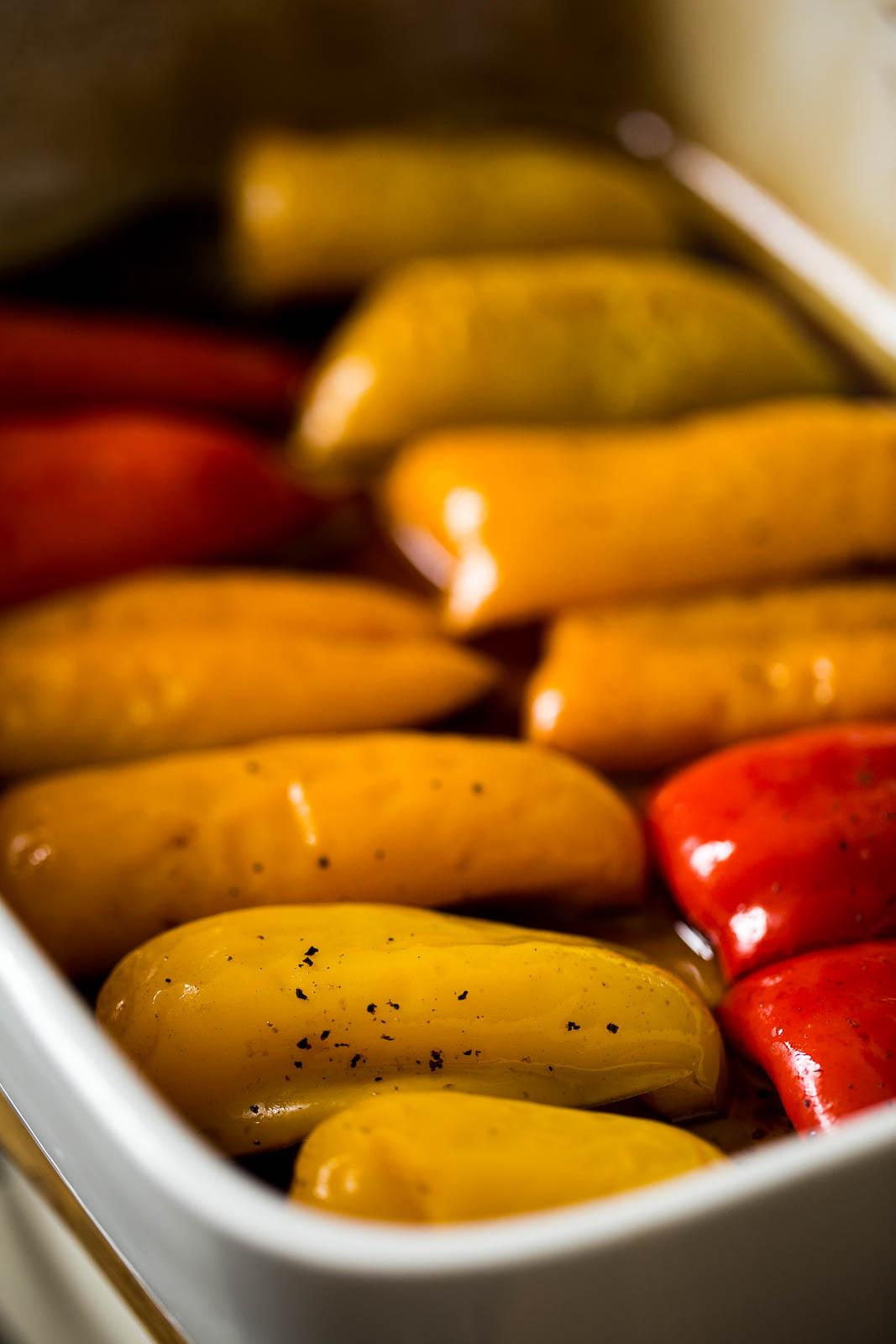 Before I could get to any of these complicated human interactions, I finished my morning pages, dressed, then at a few minutes past 6am took my dog to the local park so that he could run around chasing other dogs. When I moved to this area, I found there’s actually quite a few dogs with their people at the park at 6am, and today my pooch had the pleasure of locating a soiled nappy and running around the park with it in his mouth, gleaming with pride, as if he’d just ensnared a rare wild beast.

To top that off, a group of be-lycrad ladies appeared with their butch bootcamp-style bearded coach ready to start their Friday by being shouted at. Amongst the women was a person who I’d not seen for about 5 years and for good reason too, I had made a conscious decision to remove some people from my life, in everybody’s best interests and she was part of the periphery of that group. Having quietly eluded them for quite some time, suddenly seeing one of these people was quite a shock and I got that uneasy feeling in my stomach, so felt like leaving. However, asking a dog who is defending a his plaything like he’s just located the Holy Grail and the secret of ever-lasting life to quietly and calmly relinquish his grip on said item and leave the park is a bit like asking Donald Trump to quietly step down from world domination and follow a life of shamanic introspection.

What actually happened is that my dog ran amongst the group of women, displaying his proud bounty whilst I tried to quietly and discretely call him back to me and not draw any attention to myself at the same time. I didn’t make eye contact, but eventually the pooch lost interest so that another dog could covet the canine prize of the day. I left the park, having forgotten entirely about any meetings that might be happening this morning, so I guess there’s a bright side to all of this. 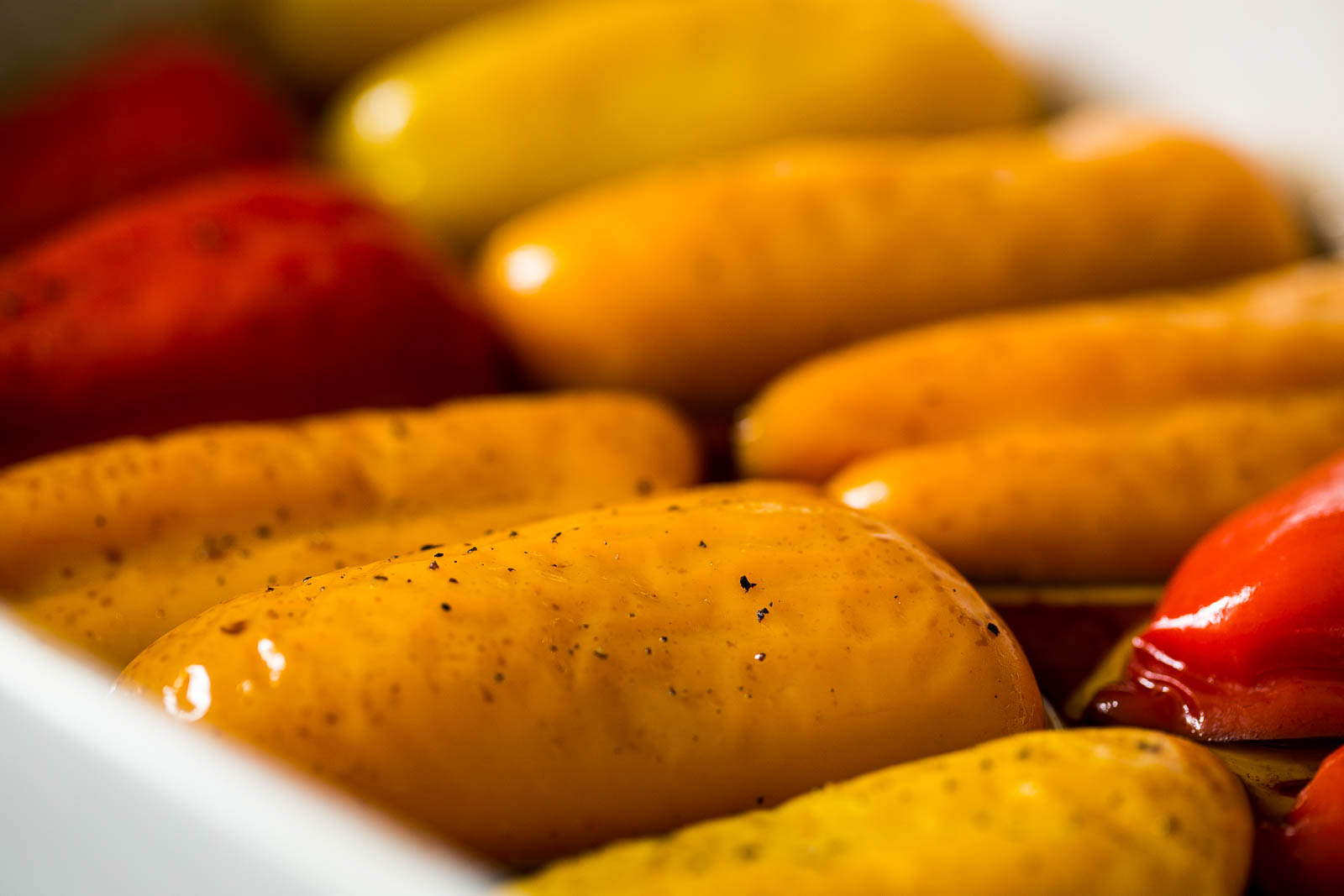 So, food. I almost forgot. Today is a recipe which I have held a special affection for over a long period of time. Roasted peppers are one of those special ingredients, they hold a mediterranean charm that can slingshot my psyche out of drab suburban reality and into a romantic sun-kissed riviera just by mentioning their name. Like sun dried tomatoes, they’re so utterly un-English in their conception that they can only suggest something warmer, richer and more emotional than the life that often exists herein.

In this instance, they’re roasted but perhaps would be better described as braised, however the result is what anyone would call a roasted pepper, a rich, slippery slither of pepper that’s a gem of an ingredient. The big question is to peel, or not to peel. Traditionally, peeling is a must, because the skin can be slightly bitter in places which can detract from the flavour. However, in the same way that plucking thyme is a hateful task, so is peeling peppers. On a practical level, there is no need to peel them, they taste damn good still and peeling them is a slow, miserable task. I generally avoid it if possible.

When plain roasted peppers are so delightful, creating balsamic roasted peppers by adding just a soupçon of balsamic vinegar takes them from delightful to utterly joyous. They don’t last long, I’d eaten a load straight out of the oven, luckily I managed to retain enough of them to make a decent meal for myself, but it was a hard fought battle. My recommendation is that you buy more peppers than you think you need, if you reckon three is enough, cook four, or five, or six. It’s easier to do that than to realise everyone’s stuck their fingers in and half your crop has gone before you’ve even got them to the table.

And when you get them to the table, don’t stand on ceremony, just make sure you get your hands on them tout de suite, errr, sorry. I meant offer them around gracefully to your guests before delving deeply into the bowl and emptying the entire remainder of it’s contents onto your own plate. Enjoy. 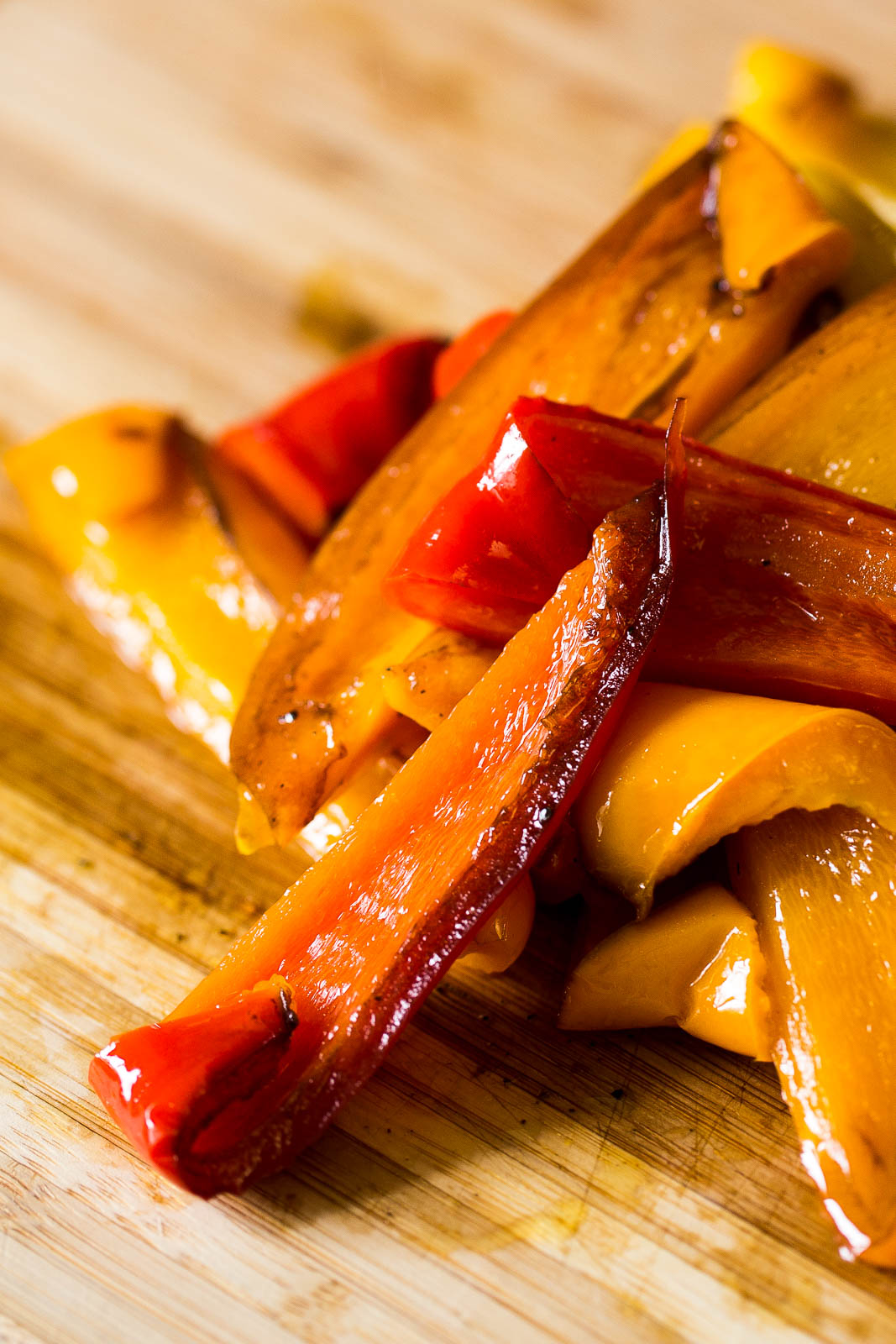 Cut the peppers into quarters, remove the stalk, seeds and inner membrane.

Place the peppers and garlic cloves in an oven proof dish, then pour the olive oil and vinegar over them and mix them all up. Season well.

Turn all the peppers so that they are skin side up, then cover the dish tightly with kitchen foil.

Place in the oven and cook for 50 minutes.

Once cooked, you can eat your balsamic roasted peppers straight away, or once they have cooled and you can store them in the fridge for a few days as well.

If you want to peel your peppers, remove them from the dish immediately after cooking and place in a bowl whilst still hot, then cover with cling film for 10 minutes. Remove one piece at a time and peel the skin off. Don’t try this in a hurry.