Today it’s one of my classic, sure-fire favourites. A little recipe I regularly make, always ensuring a bag of corn is residing in the cupboard, ready to launch itself into a steaming hot bowl of sweet cinnamon popcorn at the merest hint of a movie night. Besides, making popcorn at home is awesome fun and once you buy the bag of corn, you’ll always have the ingredients to make as much as you want.

I’ve been eating like a pig this weekend, which just has to happen occasionally, like a high-board dive into unabashed gluttony. They say the best diet is one which is varied, however I eat consistently healthy food in constrained portions all week. Therefore, including a hearty, gut-busting portion of ‘varied’* food occasionally at the weekends, enhances that sought-after variety and can only make my diet the pinnacle of healthy eating**.

* i.e. pizza, curry, ice cream etc.
** I am not a dietician and you should not take this suggestion seriously. 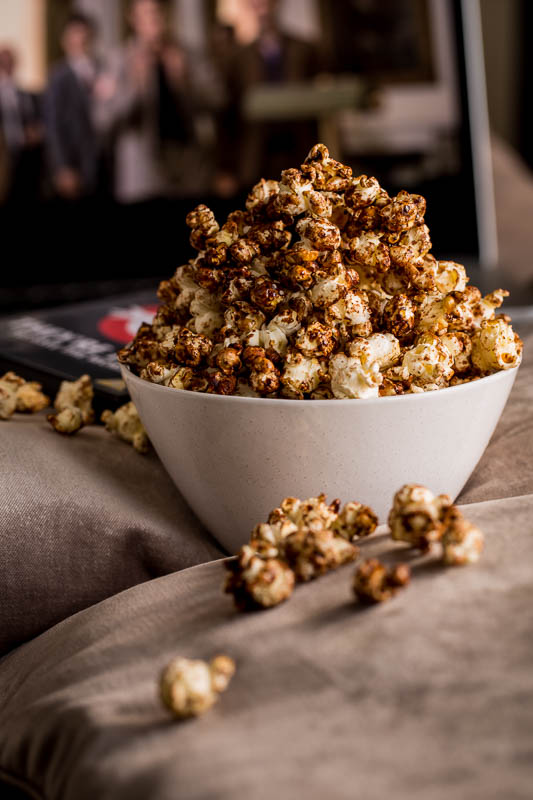 I registered with a new doctor in my area last week, which involved a routine health check revealing my weight, height, position as a non-smoker and surprisingly, low blood pressure. My limited knowledge of blood pressure symptoms and causes relates largely to high blood pressure, which always appears to be due to working too much or eating too much. Upon discovering this fact, I sat adrift momentarily, wondering if this means I need to get a more stressful job? Perhaps my laissez-faire employment status isn’t taxing my stress levels enough? Should I become an air-traffic controller? Perhaps I should quit the vegetables and eat more greasy, meaty foods? Maybe not. Ultimately we determined there was nothing really wrong with.

To celebrate, I had a blowout pizza and ice cream session last night, resolving to make today (Sunday) a hearty but wholesome day regarding food. I planned to make my trademark cinnamon popcorn to photograph and share on my blog, but after eating too much pizza I felt a renewed resolve, swearing humbly before my empty board, to photograph the popcorn then cast it aside, uneaten. 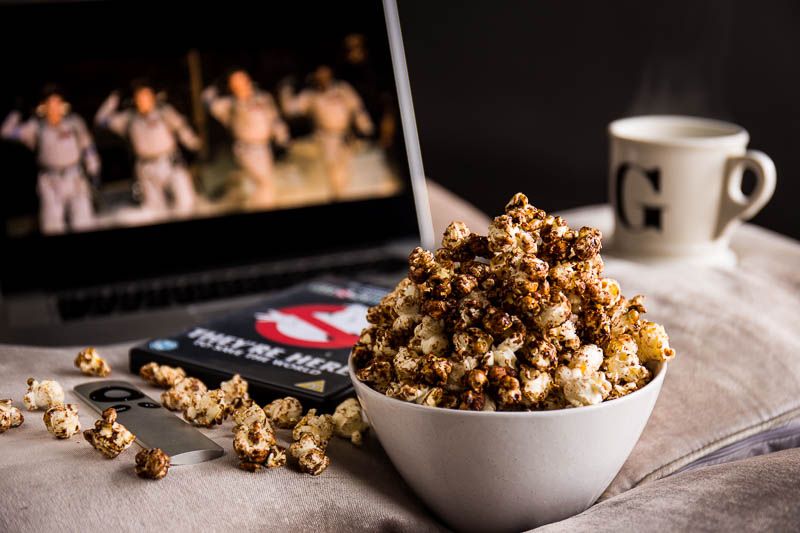 I’ve tried salty popcorn on many occasions, but I just don’t get it. I’ve tried and tried. I’ve made it for myself, I’ve had it at cinemas, I’ve debated it’s relevance with proponents of the salty stuff, but I simply cannot enjoy it. My history with sweet popcorn, however, is long and varied.

I first made sweet popcorn about twenty years ago, burning sugar onto the base of my mother’s pans back at home. Since then I’ve made it sporadically, until recently, when it suddenly become de rigour, crackling away on the stove the second I consider watching a film. Over the last twenty times I’ve made it I’ve refined the recipe again and again, tweaking the temperatures and amounts until I found a failsafe recipe that tastes fantastic without being excessively sweet. And it’s not going to ruin your pans.

When browsing online popcorn recipes, I found many which involve popping the corn, then smothering it in a ridiculously sweet topping or coating. That’s all a bit too complex for me, I like to pop and go. It’s one pan or the highway. Hence I created a one-pan cinnamon popcorn recipe which is simple and great fun to make, tastes fantastic and uses as little sugar as possible. It’s pleasantly sweet and doesn’t require a quantity of sugar that makes you gasp when you pour it out. You can vary the sugar to your tastes if you want sweeter popcorn.

There’s convention in making recipes which says you should read the recipe at least once and familiarise yourself with it before starting to cook. Obviously I never do that, I start cooking, then at some point realise I need to skin a load of red peppers and pluck a load of thyme leaves in the next 30 seconds.

This popcorn recipe involves getting sugar very hot, which can easily burn, create a lot of smoke and taste horrible if you do it wrong. I implore you, please, please, read the instructions carefully before you start. 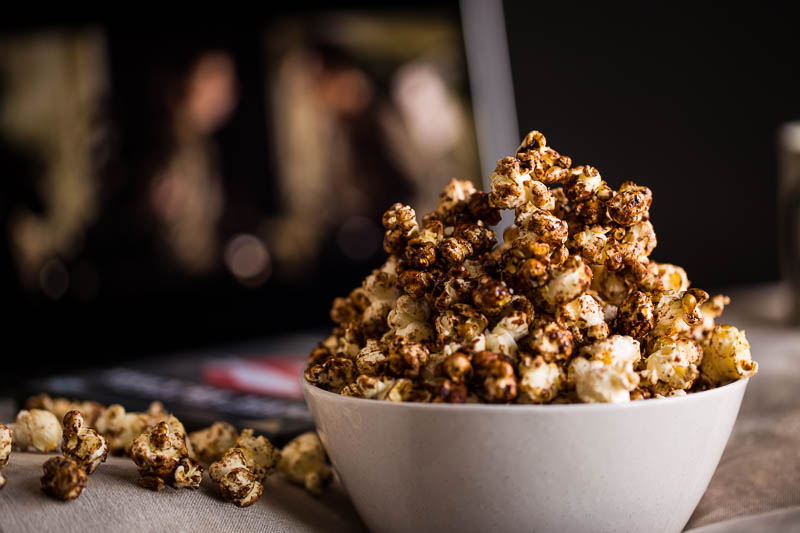 It is important to keep the lid on the pan at all times during the making of this. You want as much heat as possible retained inside the saucepan. The recipe melts the sugar onto projectile pieces of corn, which you do not want to escape from the pan.

Find your serving dish and place it nearby, ready to pour the finished popcorn into.

Mix together your popping corn, sugar and cinnamon in a cup.

After about 5 minutes, check if the top of the saucepan lid is hot with the back of your hand. If not, leave it a few more minutes.

Once the pan and lid is really hot, add the oil and replace the lid. Swirl it around a bit.

Put a single piece of the popping corn (it’s called a kernel) into the pan and replace the lid. The oil may be smoking and that’s OK, don’t turn the heat down.

Shortly after replacing the lid, that piece of corn should pop. Once it has, throw the rest of your corn/sugar/cinnamon mixture into the pan and replace the lid.

Keeping the pan over the heat, shake it around every 10 seconds. You might need to hold the lid in place using a tea towel if it’s really hot. Don’t take the lid off UNDER ANY CIRCUMSTANCES. Molten sugar is about to start flying around at high speed inside the pan and you really don’t want any to escape, it burns. When it all starts popping, keep shaking the pan every few seconds, making sure that lid stays on.

After a short while, the popping will slow down, until there’s a pop every few seconds. Once it’s 3-5 seconds between pops, give the pan a last shake and remove from the heat.

Take the lid off and pour it all into your serving bowl immediately.

Start your film and gorge!