This week I witnessed a new low in the world of food blogging. I’m not talking about another one of those sugar-fuelled, chocolate filled ‘breakfast’ recipes which seem to be unnervingly common from certain parts of the food blogging world and in no way helping the overconsumption and obesity problems in certain developed countries. In fact, I’m talking about sliding off the other end of the calorific scale, into the doldrums of malnourishment.

Before I unveil this little surprise for you I just want to interject something about food blogging which has bugged me since I first started. I’ve always felt that blogging is decidedly amateur. No prizes there Gavin. Of course it’s amateur, because that’s almost the very definition of blogging, it’s a platform in which you and I, the person on the street, the layman, can become a publisher of our own content in our specialised subject. To do so, I have to pass no exams, fulfil no editorial requirements nor do I have to meet any professional standards. I can go out, write what I want and say what I want, whether it’s based on fact or not. Yet despite these amateur requirements, blogging is in fact a highly professional pursuit with a certain percentage earning good money from doing it. This strikes me as a highly divisive conflict within the world of blogging.

So what have I seen that is so fundamentally outrageous, when we live in a world of war, terrorism and political division? Well, I saw a recipe for a simple cucumber salad which was described as ‘filling’. Sounds trivial, eh? But it’s not. I want to step back and consider this. A salad of raw sliced cucumber with a dressing and a sprinkling of crushed peanuts, that’s all. Not served on a bed of t-bone steak, or topped with a seared tuna steak. It wasn’t described as a light side, but as a ‘go-to healthy and filling dish’. The recipe didn’t have any nutritional information attached to it, but some quick online research has suggested it would be unlikely to tip the scales past 500 calories for a recipe serving 2, so 250 calories per person. That’s not going to fill anything, not to mention the fact that the word filling also implies a certain level of nutritional fulfilment, which this recipe won’t provide either. 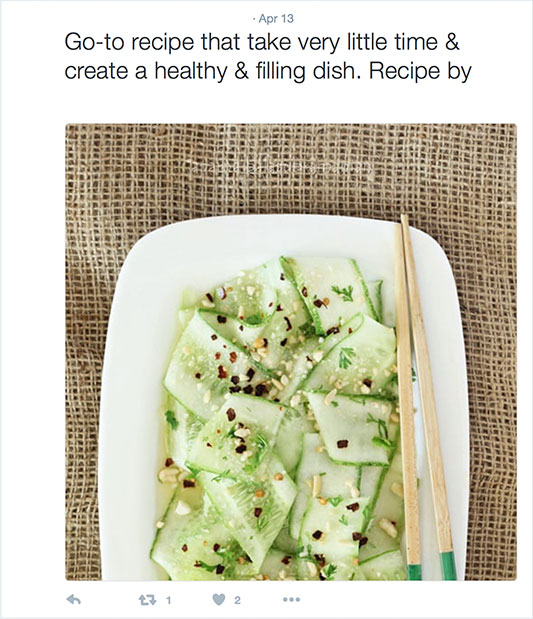 As a courtesy I’ve removed the all usernames, to save embarrassment.

What I’ve realised as a food blogger is that people take my words as sage, researched advice, rather than the bumbling amateur that I am. Some people put store in what I say, working on the basis that I’m writing these things because I know what I’m talking about. They look to me to help them out in culinary conundrums, when they don’t know what to cook, or how to cook it. So if a bloggers tells someone that a dish is filling when it is no more than a very light side dish is simply giving out false information when in a position of authority.

Not many people really know how much they should eat. Most people I know don’t understand how calories work, nor do they have an inkling of how much fat, protein, carbohydrate, cake or crisp they should eat in a day. As a publisher of recipes, I’m starting to feel a responsibility towards helping guide people in how they understand food. To start with, that means representing creations with objective honesty, rather than throwaway adjectives in the hope of getting more clicks.

People are far more likely to enjoy a blog’s content if it gives an honest appraisal of a dish. I don’t need to lie, because I don’t publish something unless I know it’s good. People don’t like to be duped or hoodwinked, so if they scurry off without thinking and make your “filling” dish, only to be wracked with hunger within minutes of finishing, they might feel slightly cheated by the description.

Take a moment to consider things

I suppose this issue bugs me on a deeper level. I’m a busy blogger, squeezing in all the burdens of life; work life, home life, personal life, social life in amongst my blogging life. It’s not easy. So posts get squeezed into any available time, words get poured out and it would be easy not to check them. In the hurry to get the ‘Publish’ button pressed, it could be tempting to squeeze out a run of whatever alluring adjectives come to mind, appended to the preamble in the hope of endearing people to the recipe.

However, before hitting that publish button, perhaps it’s worth taking a moment to consider what words have actually gone before. Are they meaningful, are they powerful, are the empathic, are they authentic? Or are they just the first words that came into your head? The Publish button is enormously powerful. Before the advent of the internet, to publish something was a huge achievement, not taken lightly. As our modern world developed with the internet, publishing became a different creature, yet it’s definition is still the same, to make something public. When we take the decision to publish something we are taking it into the public realm for all to read. That’s a big responsibility, our words are then legally accountable, if a blogger said something defamatory about someone, they could justifiably take you to court. That’s quite a responsibility to undertake.

The more I blog, the more seriously I take it, because blogging sits in a slightly uncomfortable position in the transition between amateur enthusiasm and professional publishing, with many people taking the leap from one to the other. To make that leap requires acquiring professional standards, and to that end, I read, re-read and re-re-read everything before I publish, making sure my words are clear, true and informative. I only hope that it’s a habit which catches on.