Welcome back to Part 5 of my super special two year anniversary post, the penultimate piece of the puzzle!

Being in control and rational about everything gets you nowhere. You need to be irrational and give up control, follow your intuition, then things can really change in life.

If you haven’t read Part 4 you can catch up with it here.

It’s in your heart, if you learn to listen.

In the autumn of 2015 I attended a talk at Borough Market about the future of food. The panel were entirely unknown to me, the only association was simply the word ‘food’ in the title of the talk, I went on a whim. One of the speakers was a chap called Professor Tim Lang, a vastly knowledgeable figure in the world of food, who is a very engaging speaker and I feel exudes a sense of despair at the state of the world food system.

Fact 11. Only 4% of the money you spend on food in the supermarket actually gets back to the people who grew or created it.

Upon returning home I googled Professor Lang and found he was the head of the Food Policy MSc course at City University. A lightbulb came on in my head, I wasn’t what it cast light upon, but I promptly put the course’s open evening date in my diary anyway. I attended the opening evening, talked with Professor Lang, who was very encouraging. I made an application and received an unconditional offer on the course, which I accepted, despite feeling it was irrational and whimsical. As I write this I’m getting ready to start on the Food Policy course. It’s another arrow in my quiver of skills that food blogging has provided me with and a highly specialised professional qualification to attain. I have no idea what I will do with it once I’ve completed the course, but that’s not important right now, we can be rational later.

“Have the courage to follow your heart and intuition, they somehow already know what you truly want to become. Everything else is secondary”Steve Jobs

I believe that not knowing where this course will take me is the most important part. It means I’m not controlling the outcome, I’ve just followed a slightly irrational hunch. On a rational level, it makes little sense. It was a subconscious decision, it crossed my mind and I followed it. If something doesn’t make sense, if it’s not logical or normal, but keeps on coming into my head or gives me a funny feeling in my stomach when I hear about it, then I know it’s the right thing.

If I don’t know what the outcome of an event will be, that’s the ideal situations. When I know the process involved and the outcome of a venture in life, before starting it, there is no opportunity to grow or go somewhere new. Because when we know what’s going on, we’re in full control, which is not a good thing, because it keeps us blinkered and closed to opportunities that might come along. When I have no control of the outcome, when I don’t know where a path is leading, when all I can do is my best in that moment and see what happens, that’s when life makes huge leaps forwards.

“Does this action lead me to a more powerful place?”Susan Jeffers

2016 started and I had a big life shake up. I split up with my girlfriend of 6 years in a very conscious, shared decision. Many years ago I scoffed at Chris Martin and Gwyneth Paltrow when they said they had ‘consciously uncoupled’, but I know what they mean now. Nonetheless, it was heartbreaking and led to several months of turmoil in my personal life as we sold our flat and extricated our lives from each other. I tried to find a direction for my life and decide where I should live with my pooch. It was also a moment where I had to relinquish control, I no longer had the perceived safety net of certainty which a relationship provided, I didn’t have my ‘team’, I was not in control and I had no idea where I was going to live or what I was going to do with my life.

I gained more interest in my freelance Food Photography. I was earning an income directly from the skills which I had honed as a blogger. I found even more fulfilment through my writing, entering a moment of ‘flow’ where the words simply appear on the page with little intervention from myself. I entered writing competitions and asked for paid writing opportunities, which often came back with a ‘Yes’. I was getting paid to do another thing that I love. 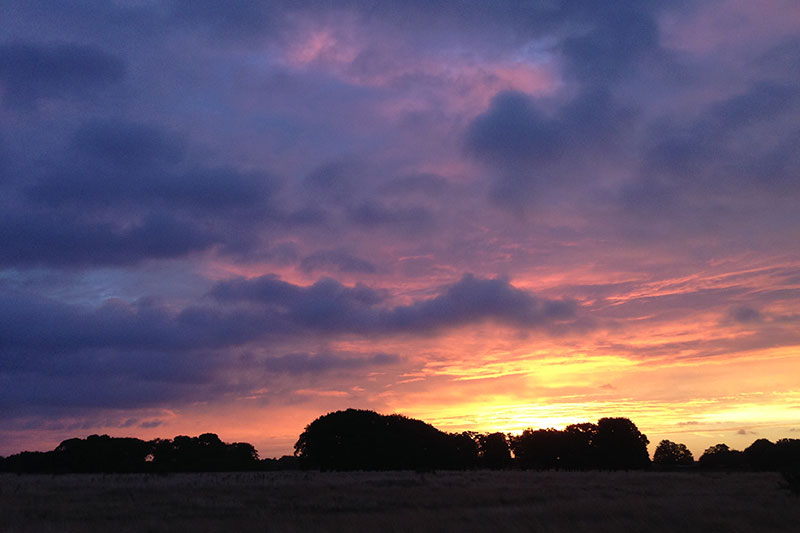 You don’t get to see this in the morning if you stay in bed!

Get Up Very Early in the Morning.

I get up at 5.40am, hand write three sides of A4 paper by 6am. I take Bernard for a walk, which is amazing in September with the glorious misty sunrises. I shower, have breakfast and get to my desk with a freshly ground coffee between 7-7.30am, a time of morning that I have slept through for most of my life, until recently. These days I jump out of bed, have no desire to hit snooze and approach the day with an enthusiasm I’ve never seen before, because I love what I do.

Next time : The final piece of the puzzle.