A month or so ago I promised you Beetroot soup ‘v2’ and that soup has finally made it’s way from the shelves of the corner shop, via my shopping bag, with a brief stay in the fridge before being nestled in various pots and pans and ultimately ending up in my stomach. Along the way, I took a few photos of the journey to share with you all. 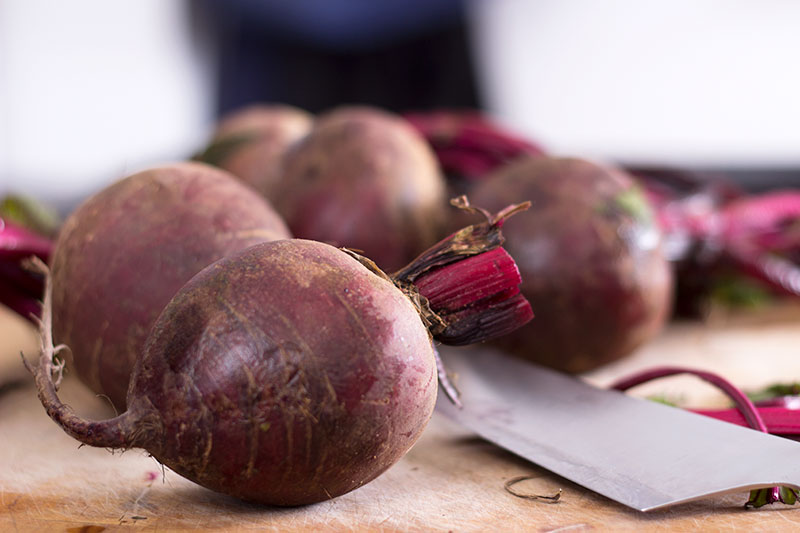 This coconut and beetroot soup ended up being quite a treat as well, because like the ugly duckling, this soup was the one which didn’t make the grade, it fell at the first hurdle and was rejected in it’s original form, poor thing. But I stripped it back, looked for it’s essence and did some personal development on it with a singular direction of flavour and it really has blossomed into the beautiful swan. 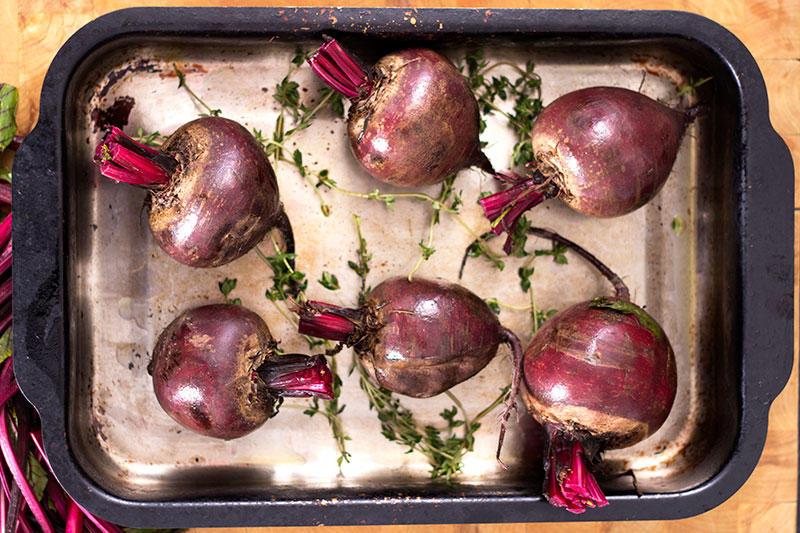 I’m tempted to say it has Caribbean influences, because it has thyme, coconut milk, shallots, garlic, ginger and scotch bonnet, which is an ingredient set that I’d attribute to Caribbean cuisine. I’ll be honest and admit the reason I’m hesitating calling it Caribbean, is because I have no idea if beetroot is a regular ingredient in the Caribbean or not and beetroot is the defining flavour in this bowl of goodness. 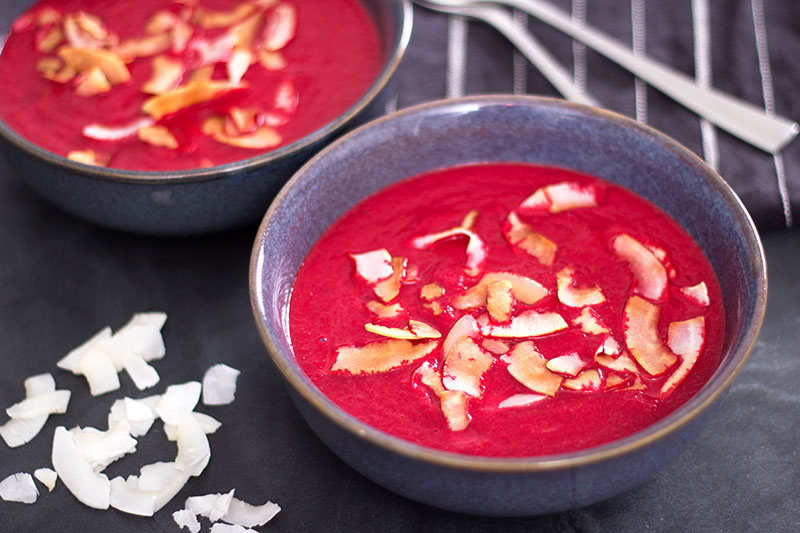 However, before we get to the really important part (the recipe, obviously) I need to talk to you about something that is very, very serious. So if you can just calm down for a moment and pay attention, that would be appreciated.

The colour of this soup is hard to describe yet is also all permeating. The pigment which gives vegetables their colour is in such abundance here, if you allow it, it will find it’s way onto everything around you. It’s hard to describe, it’s lighter than the burgundy colour of raw beetroot and more arresting than a deep maroon. It feels like the rich intensity of fuchsia, yet with more depth and a warmth, heading through magenta to a crimson edged dark pink.

‘They’ always say that you should keep things simple, yet in utter contradiction of that I’m proud to say today’s recipe is a semi-Carribean influenced British soup with dangerous crimson edged dark pink hues. But it tastes damn good, and frankly, that’s all that matters. 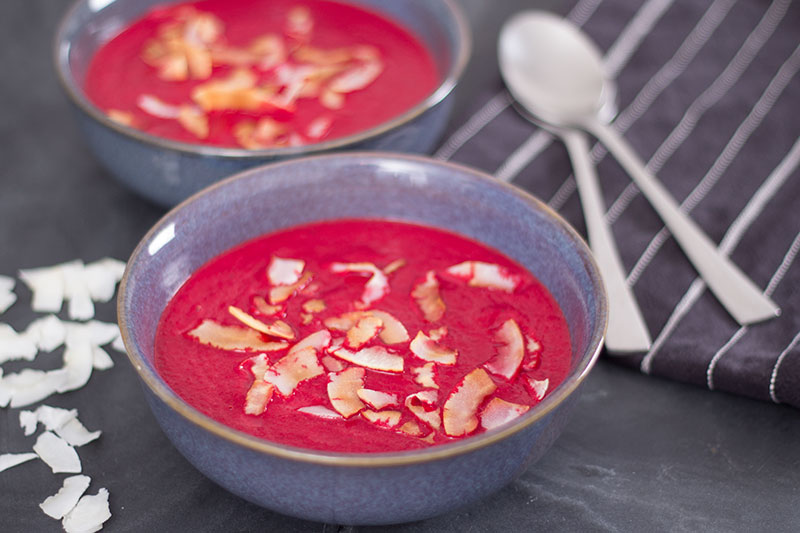 How to trim beetroot

If you buy them whole, with the long leaves on the top, then trim them off, but leave about 1 inch of stalk on top of the vegetable (see second photo from top). Also leave the root on the bottom. By leaving these on, it helps the beetroot retain more of it’s colour.

Place the trimmed beetroots in a deep roasting tin along with 2 sprigs of thyme. Toss them with the teaspoon of oil so they’re just coated, then cover the tin with foil and place in the oven for 1 hour. Remove, cool and cut the stalks and the root off, then if you squeeze and slip the beets in your hand, the skin should slide off. Chop the beetroot into 1cm chunks.

Heat the tablespoon of oil in a large saucepan over a medium heat and add the shallots, garlic and ginger. Cook these, stirring occasionally until they have softened. Add the carrots, stock, thyme and scotch bonnet and simmer, covered for 10 minutes. Add the beetroot and coconut milk and simmer for a further 10 minutes.

Heat a frying pan over a medium heat, place the coconut flakes in it and cook, dry, stirring occasionally until they have browned nicely, then remove from the heat.

Remove the thyme sprigs and the scotch bonnet from the soup, then use either a blender or a stick blender to puree the soup into smooth liquid and serve topped with coconut flakes.