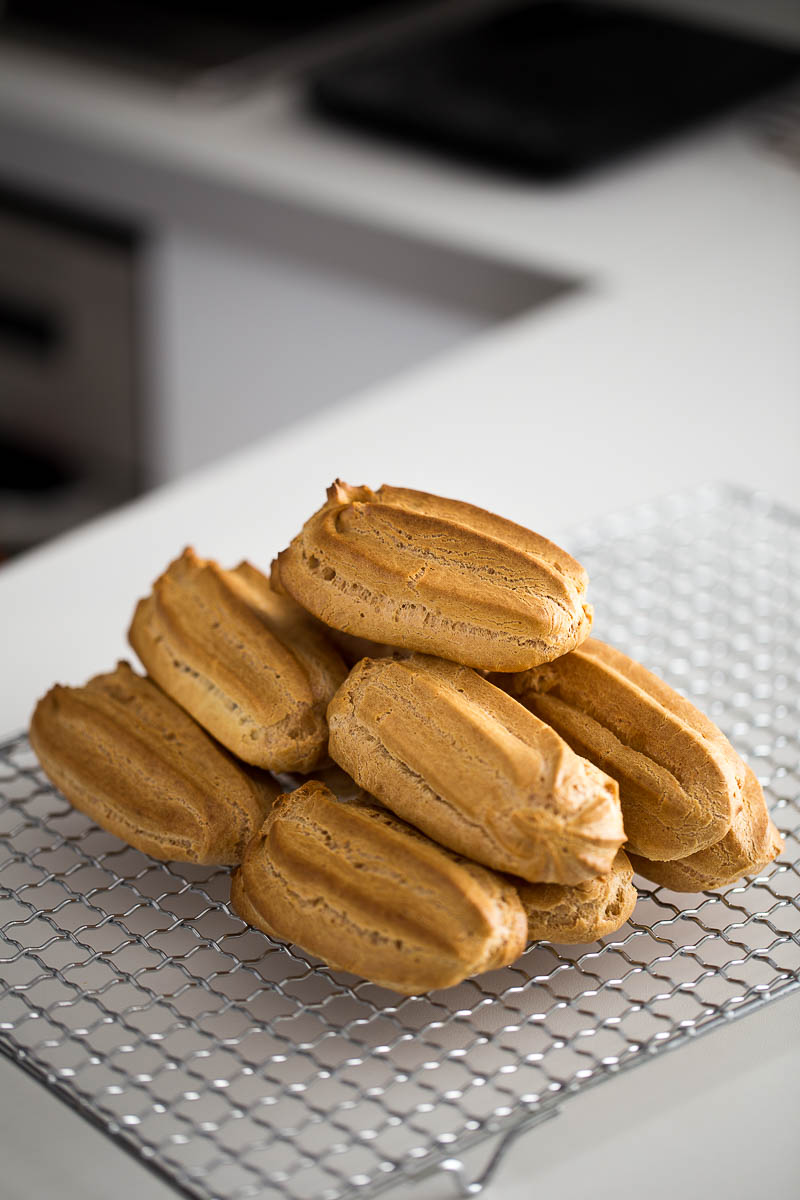 Suddenly, inspiration hit me. I want to make a croquembouche, a spelt croquembouche and it needs to be a massive one made up with loads and loads of little spelt choux (pronounced ‘shoe’) balls.

Croquembouche is one of the most spectacularly decadent culinary creations in existence. It’s a celebratory sweet used in French cuisine at special occasions, comprising choux pastry balls into the hundreds, stuffed with cream then piled high in a cone shape and bound together with large splurges of caramel. It’s the kind of recipe that should have The Samaritans’ phone number attached, especially if you’re making it to a deadline, or for the first time, because I could easily induce some kind of nervous breakdown.

As the saying goes, there’s no use trying to run before I can walk. The first step in this adventure is to make, and become comfortable with choux pastry. Also known as choux paste, it’s quite unlike other pastry and a rolling pin is nowhere to be seen. 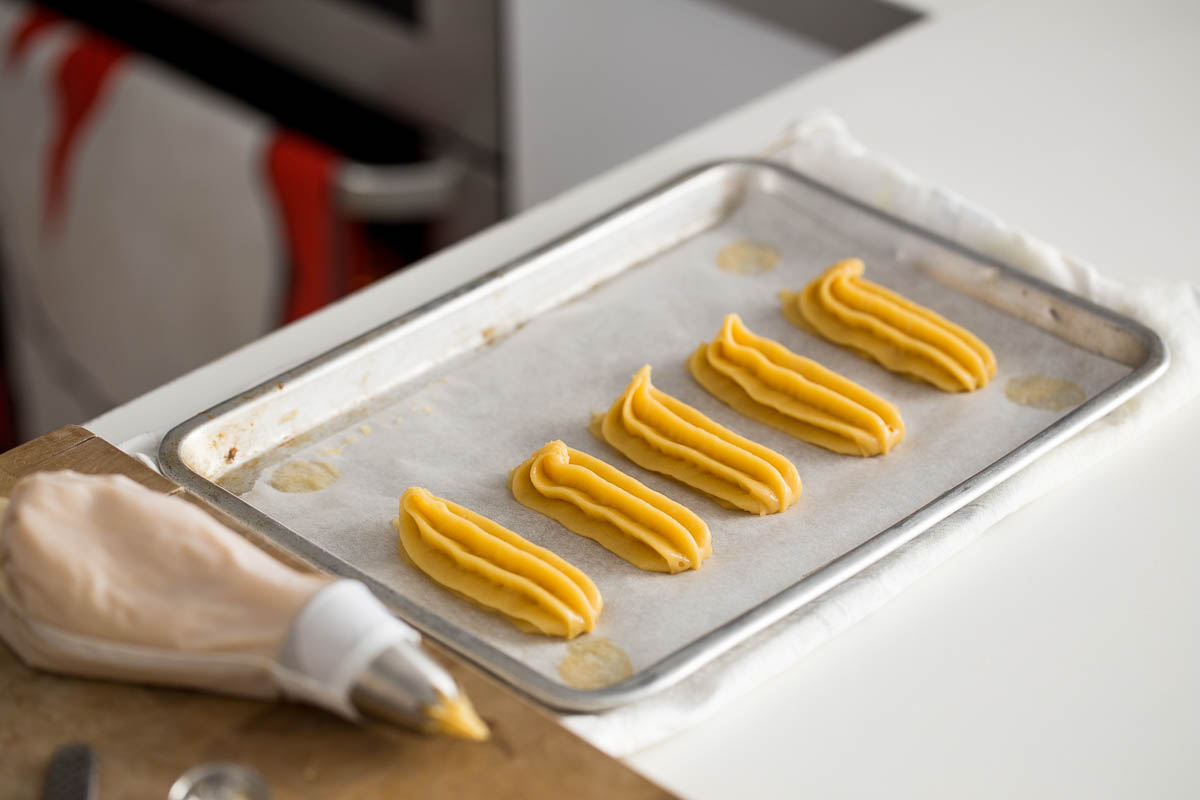 Choux pastry is made over heat and is a thick, sticky paste when ready to use. You cannot roll it out, it has to be piped, like icing. When cooking it expands and creates a hollow centre that can be filled with all kinds of loveliness.

Choux pastry is most commonly known for it’s use to make eclairs or profiteroles (‘Profit Rolls’ as my old boss would say and I would always nervously laugh at). However, it’s reputation precedes it, being known as one of the trickier pastries to make. As a result I hadn’t made it until last week, but now I’ve made it about six times. 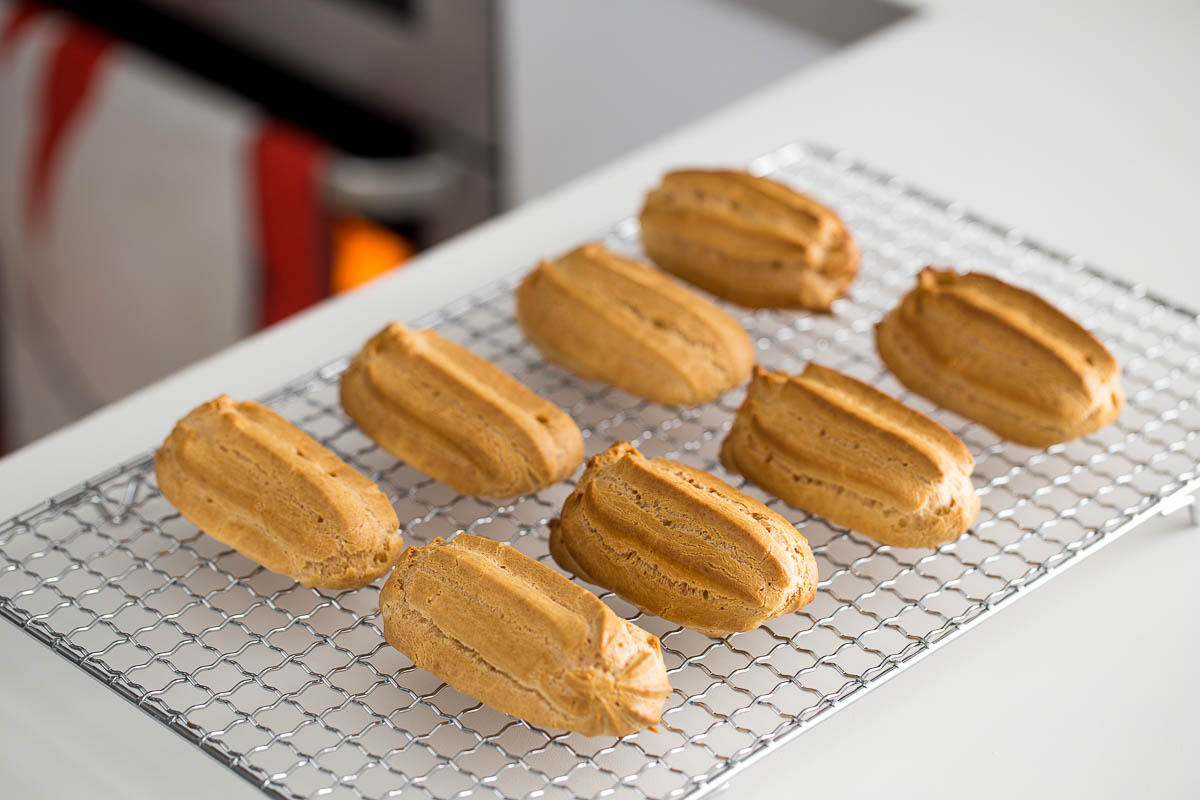 In my unending search to create an exhaustive online repository of spelt recipes, I decided to take traditional Pâte à choux – to give it the correct French title – and adapt it to spelt flour. I feel there’s a lack of good information about spelt flour online, so I’m trying to create more recipes using it and what better to add than spelt choux paste! Over the last week I’ve become quite an expert on the finer points of spelt choux production and I have discovered the following important facts for beginners.

1) Making choux pastry is very easy, do not be daunted by any horror stories you may have heard. It’s quick and simple.

2) Making perfect spelt choux buns, eclairs or profiteroles, is not so easy.

When I create these new spelt recipes, I refer to well known sources which always includes Larousse Gastronomique as a benchmark. I then adapt it for spelt flour, adjusting in the ways I’m learning spelt needs to be treated. For spelt choux, I used four separate sources which all used traditional wheat. 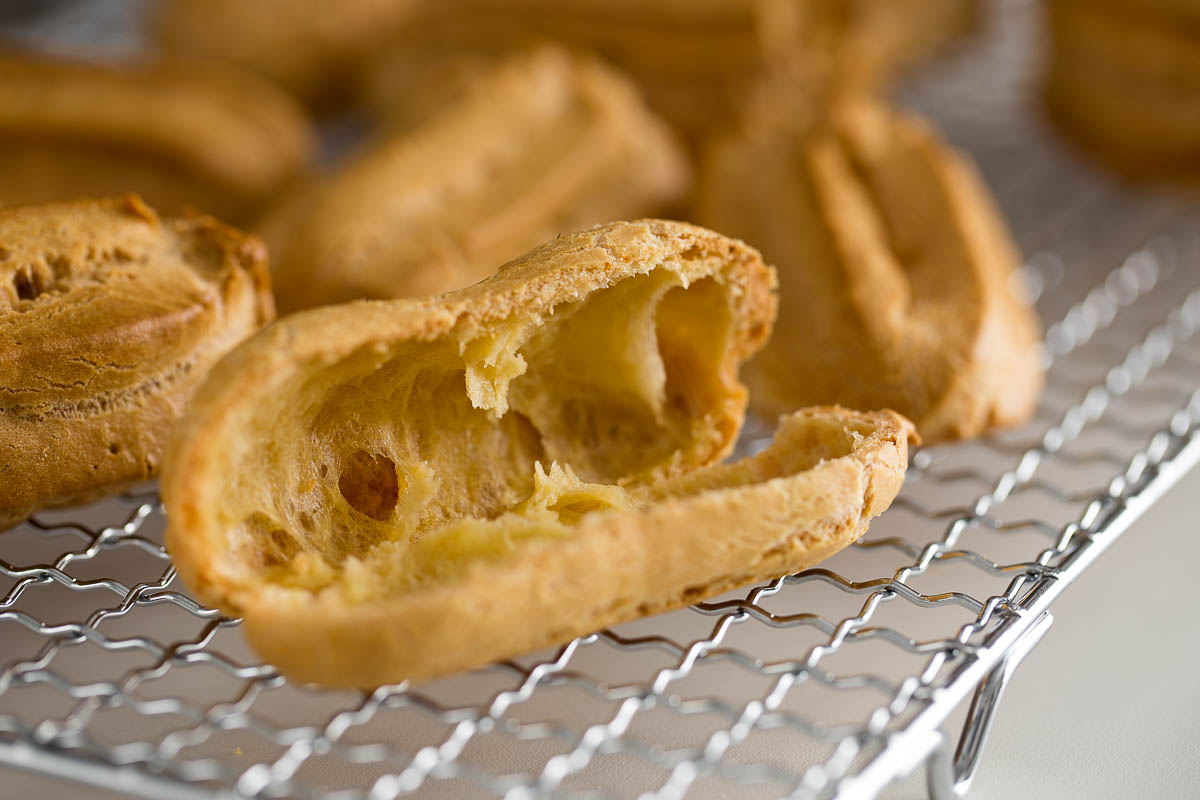 Finally, I have a spelt choux recipe to be proud of. This is the next building block on my road to croquembouche heaven. I’ve still not worked out who I’m making the croquembouche for, after all, if it’s made of around 100 choux buns, I need at least 25 people to share this with. Traditionally, a croquembouche would be made for a party and I don’t have any coming up. Conversely, I could create a party for a croquembouche and would that be such a bad thing?

When cooking spelt choux pastry, it’s important that the heat in your oven can flow around the pastry at all times.

Use a baking sheet (not a deep-sided tin or tray) which is small enough to leave space around it when placed on the oven shelf.

If the tray you use is too big, or has deep sides, you may find that your pastry cooks unevenly.

AND DON’T OPEN THE DOOR WHEN THEY’RE COOKING!

Sift the flour into a bowl and set aside.

Place the butter, milk, water, salt and sugar in a saucepan and bring to a boil. 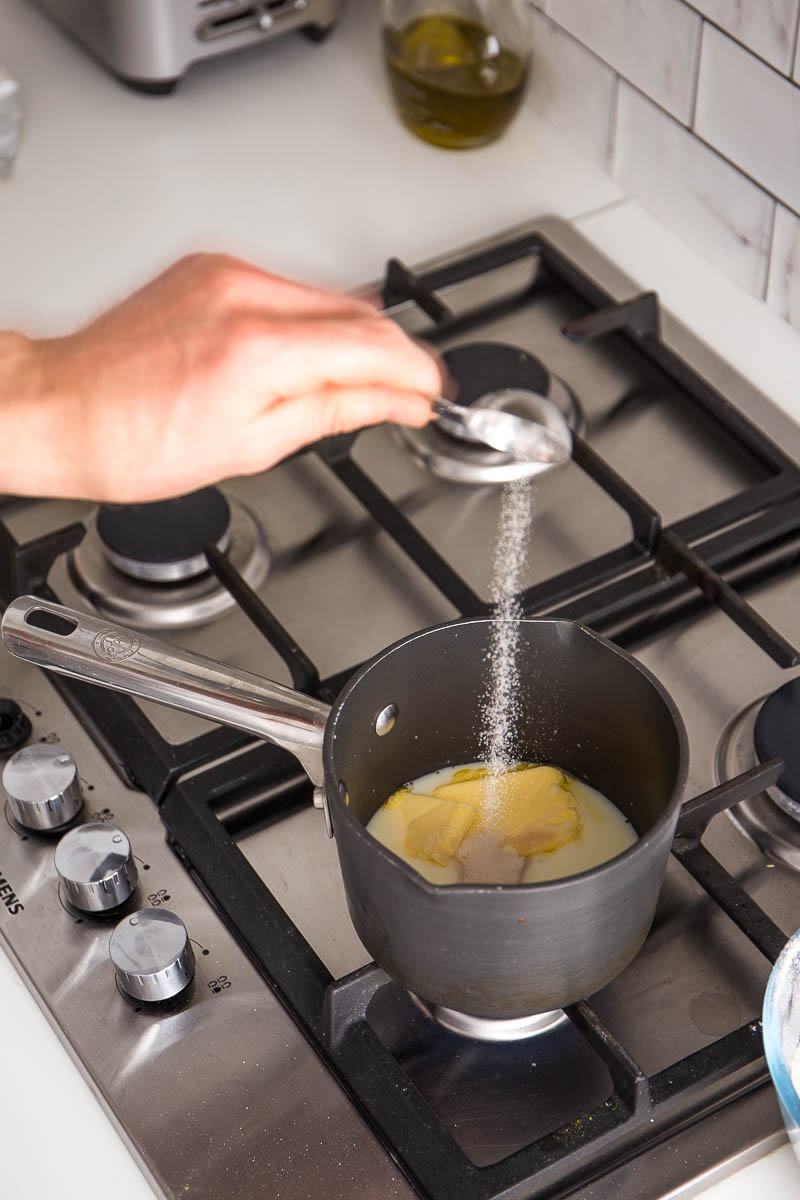 When it boils, remove from the heat, pour the sieved flour straight into it and mix with a wooden spoon until it all comes together. 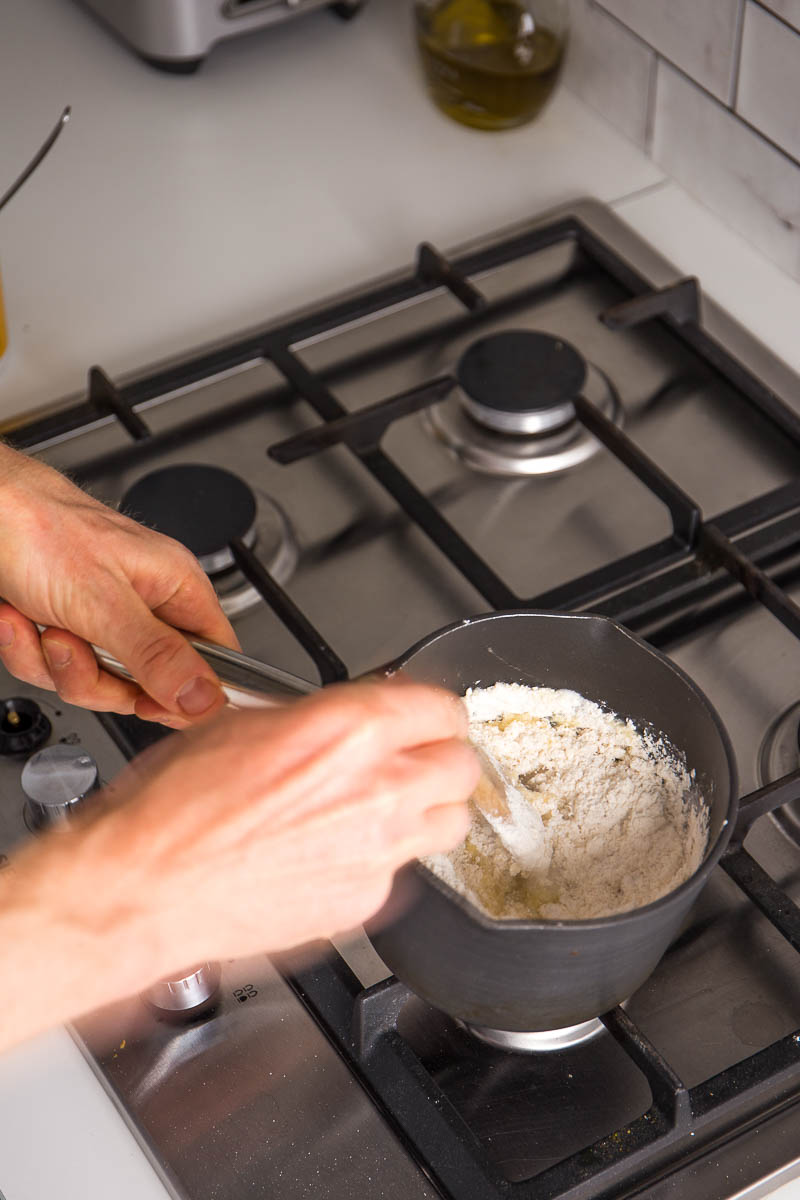 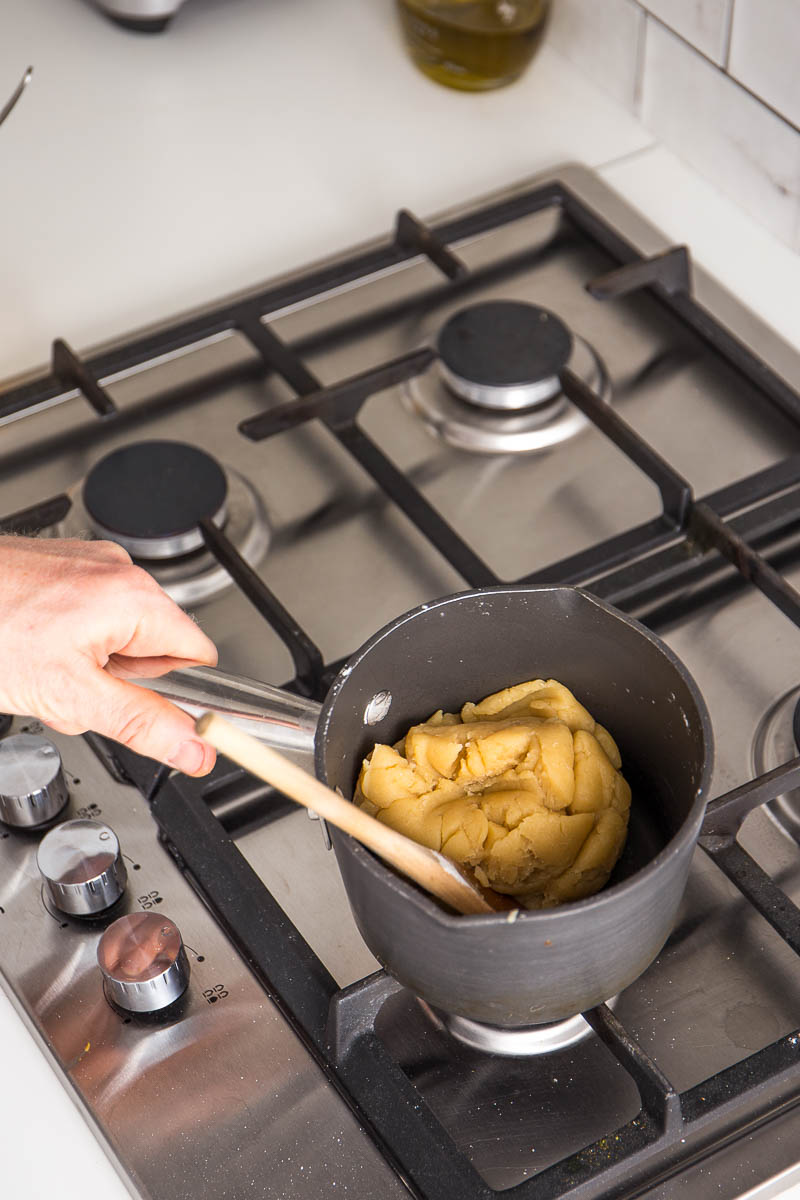 Put the pan back onto the heat and mix for a further 2 minutes to help dry the mixture slightly. Set aside to cool to 60ºC or less. If you’re in a hurry, mix the paste around, as the movement helps it to cool quicker.

Transfer the paste to a bowl and beat in one egg at a time with the spoon, ensuring it is incorporated fully into the paste before adding the next egg. When all eggs are added, keep beating until you have a thick and sticky, but smooth paste. Yes, I’m using a whisk in the photo. This was A BAD IDEA. Use a wooden spoon, trust me. 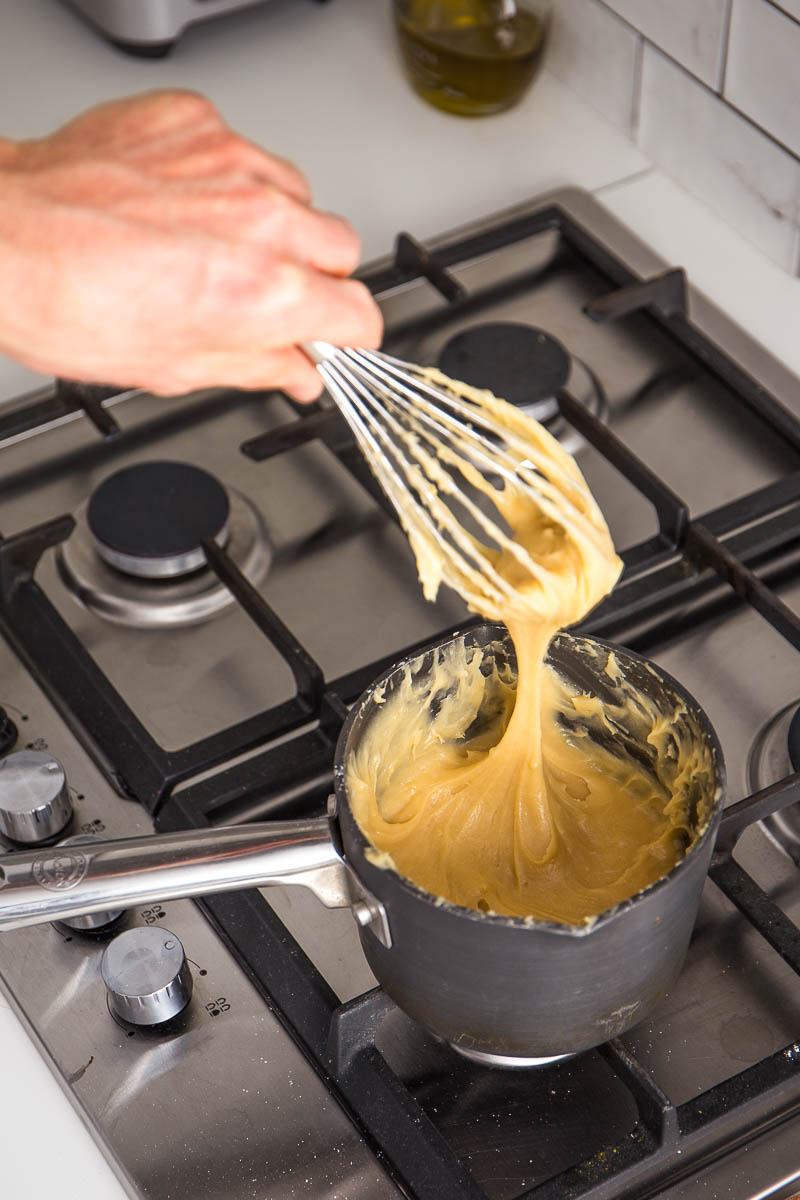 Line a baking sheet with baking paper. You can use a little blob of choux paste in each corner as adhesive to stick the paper to the pan. 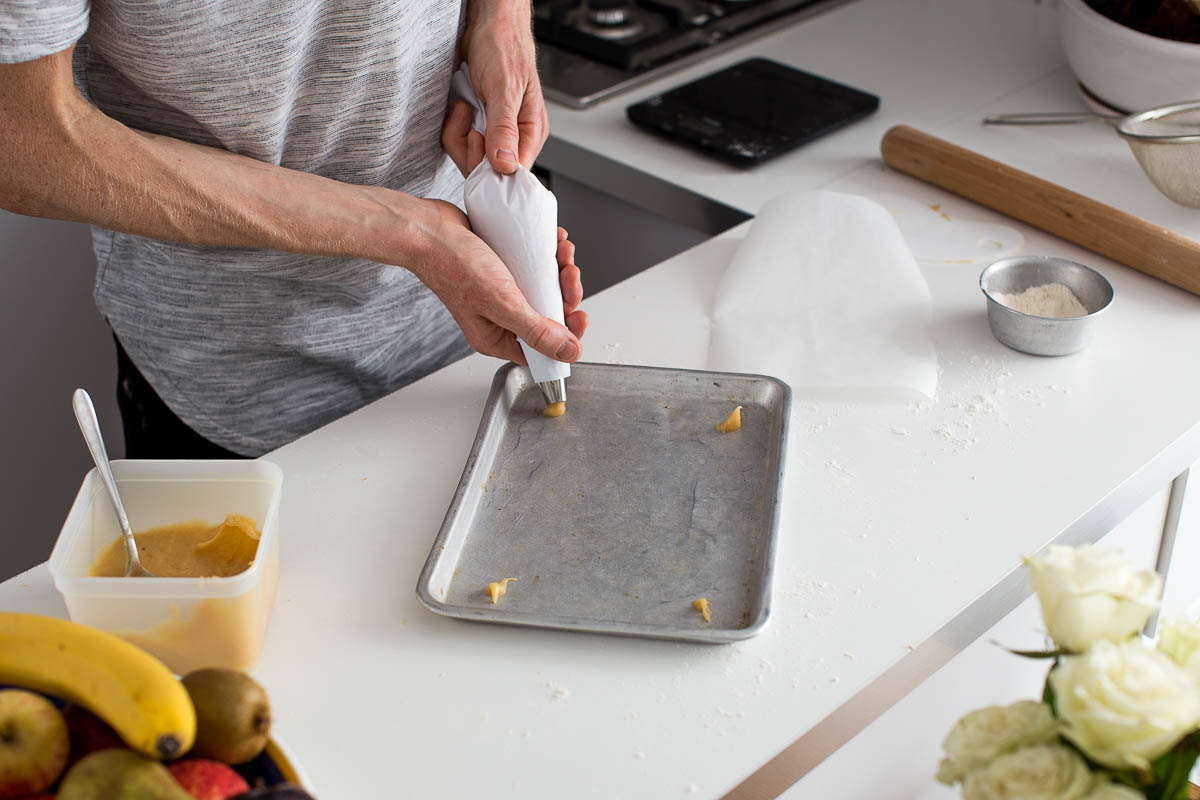 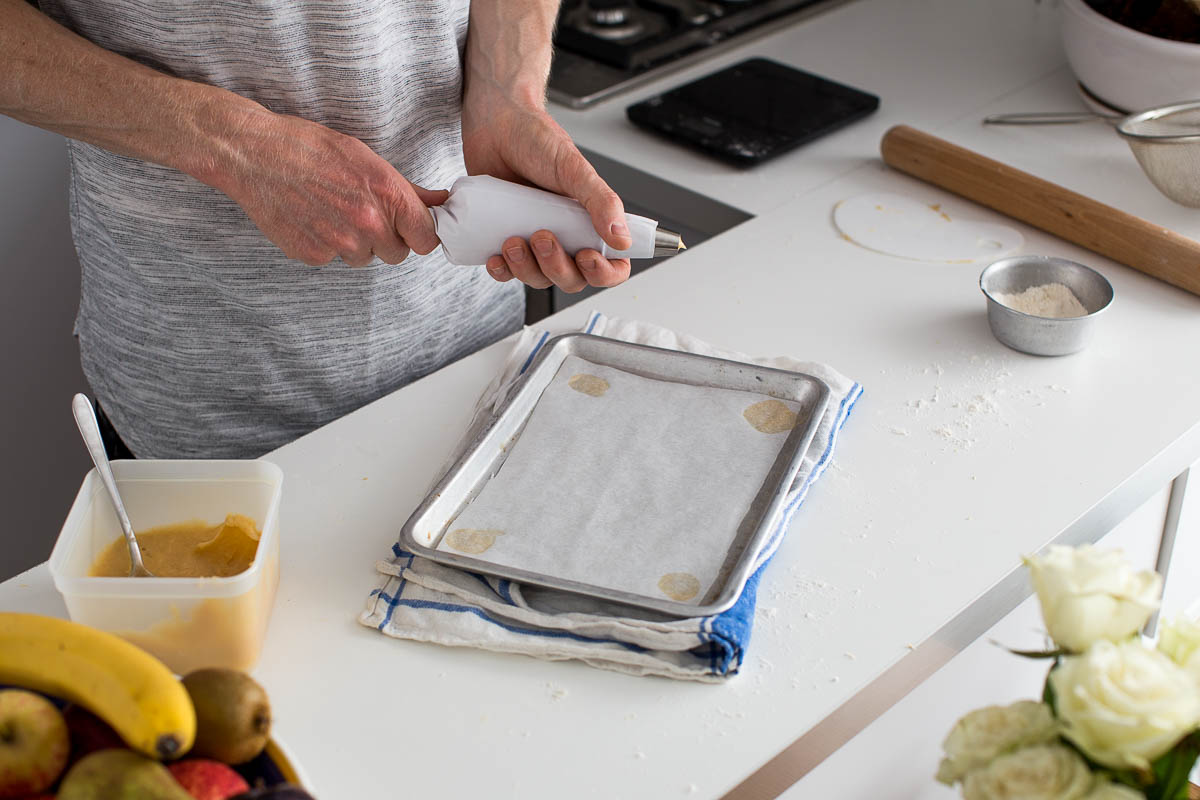 Pipe onto the baking sheet using a 1.5cm wide nozzle into the shapes you require.

If you open the door at the wrong time, it may interrupt the cooking process and cause your pastry to sag and lose it’s rise.

Remove and allow to cool on a cooling rack. Some people poke a hole in the underside each piece to release steam. This should not be necessary, however, there is no harm in doing it, especially if you will be filling them through this same hole later.