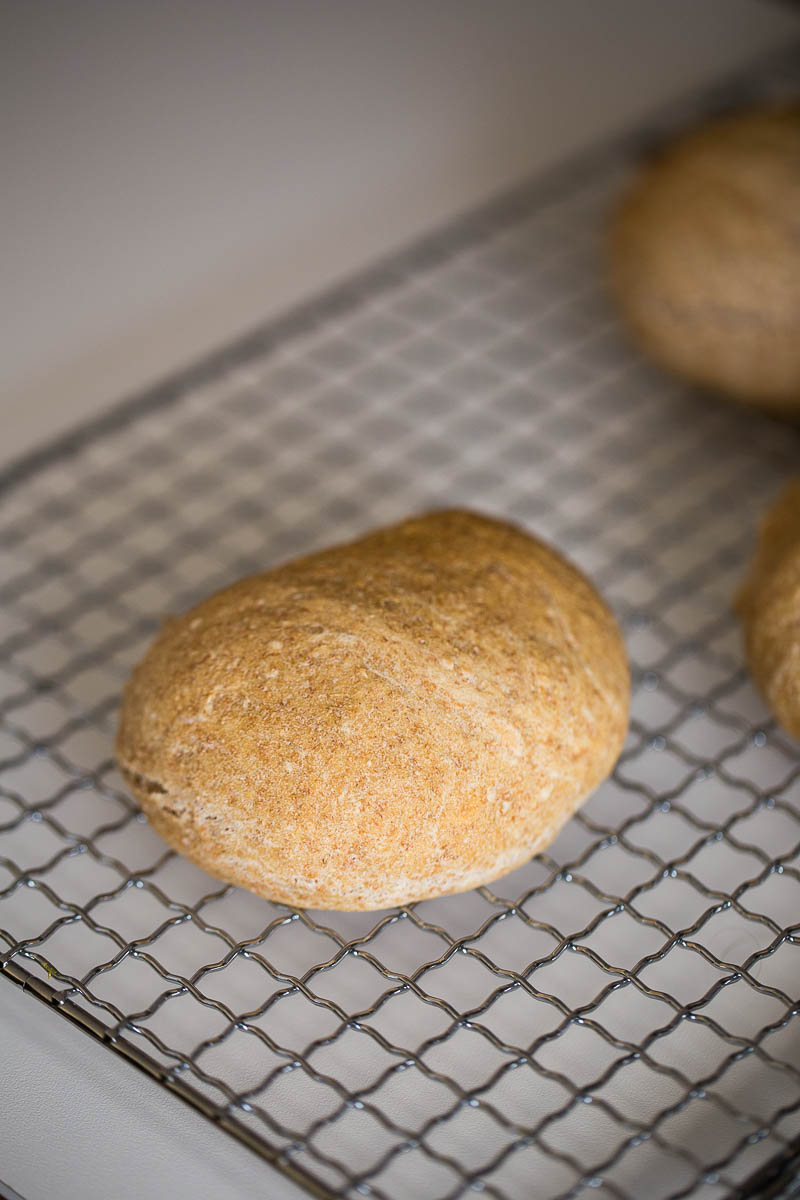 In every spelt recipe on my blog, I’ve stated there’s no need to knead spelt dough. This pearl of wisdom originated several years ago from a long-forgotten source, yet, as I create more spelt recipes for my blog, I’ve begun to question it. 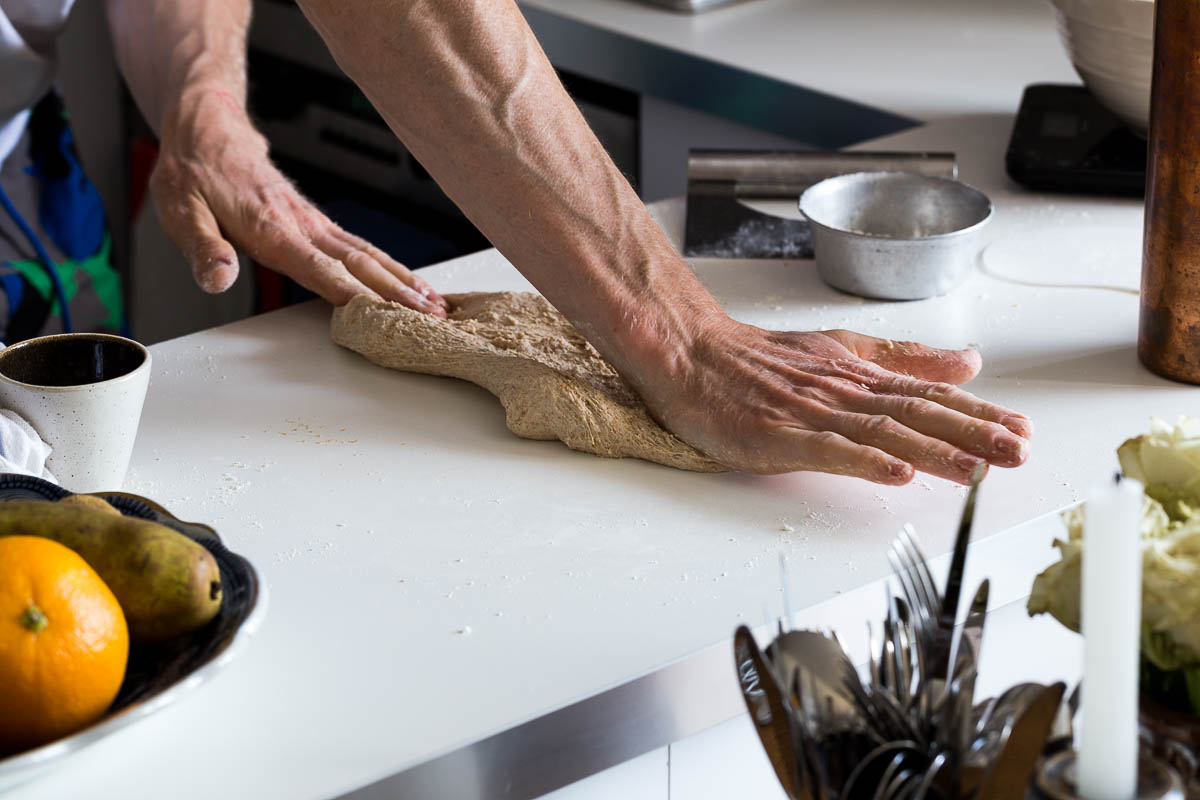 Roger Saul, in his Sharpham Park ‘Spelt’ book, says we should knead spelt dough for 10 minutes. I was surprised to read this as it seems excessive, however, I also realise that he grows the stuff and sells it in supermarkets, so I was interested to see if a full 10 minute arm workout at the counter really has a benefit.

All varieties of wheat (including spelt) contain two proteins, gliaden and glutenin, which if combined with water and kneaded, create a complex protein known as gluten. Gluten is what gives dough it’s elasticity and stretchability, resulting in tall, light and fluffy bread. These properties have been promoted through the hybrid breeding of modern wheat, so that our modern grains are able to produce more gluten than their ancient counterparts and consequently, more impressive loaves.

For some people, gluten is the troublesome part of bread, such as for those suffering from Coeliac disease. Others claim the increased amount of gluten of modern wheat can create digestive problems, but my personal feeling is that spelt bakes are simply easier to digest. The modifications to commercially grown varieties of modern wheat are all in the name of appearance or increased yield and production, not the health or digestive benefits of the consumer.

Back in the kitchen, bakers have a saying “the wetter, the better”, as wetter dough creates a nicer bread, which is another reason minimise kneading. Spelt dough is so inordinately sticky that kneading requires a lot of flour dusting to prevent the dough from sticking to hands and worktops. This means no knead spelt dough can be wetter and therefore, better, if we are to believe the idiom.

To test the theory I made some spelt buns with the same batch of dough, which I split in half. One half was baked after minimal kneading and the other with a full 10 minutes, as per Rogar Saul’s recipes.

1. Use a basic spelt dough recipe.
2. Mix the ingredients in a bowl.
3. Knead a couple of times, as per my usual instructions.
4. Divide the dough precisely in half by weight.
5. Set half aside to prove.
6. Knead other half for 10 minutes, then set aside to prove.
7. Knock back, then divide each half into four buns and set aside to rise.
8. Bake, analyse and eat. 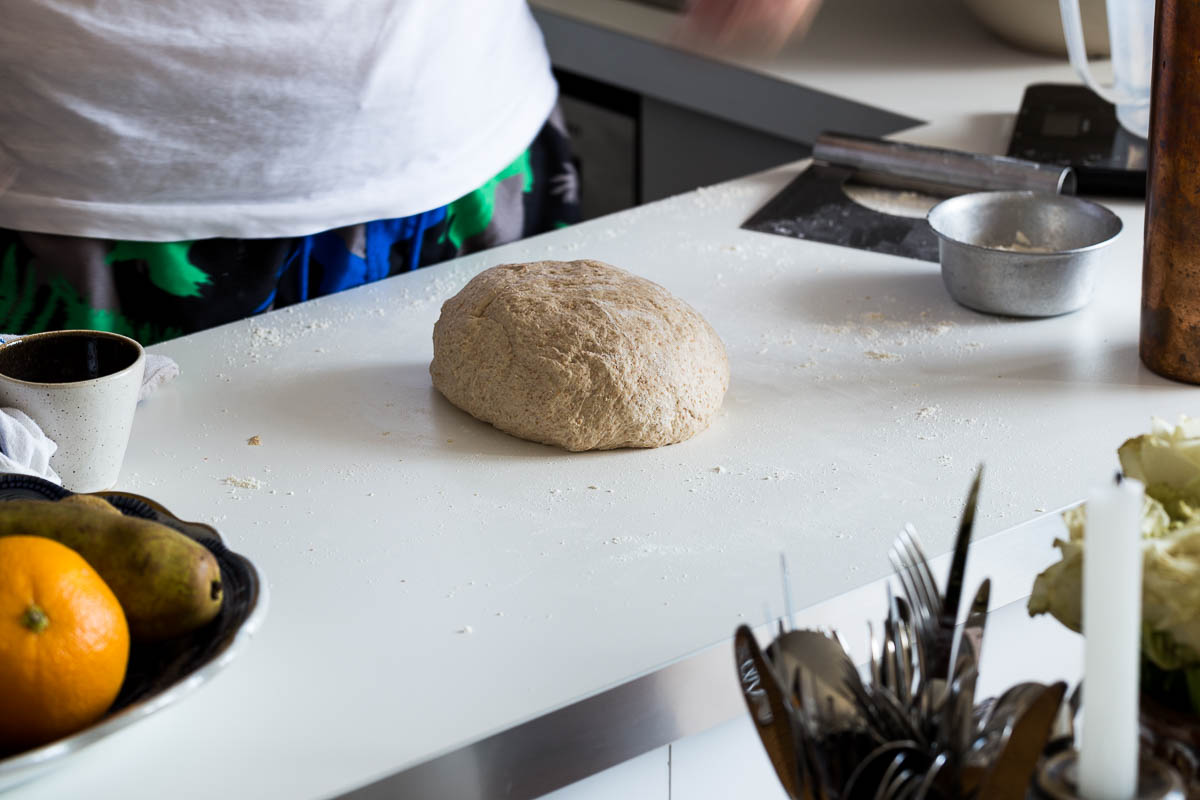 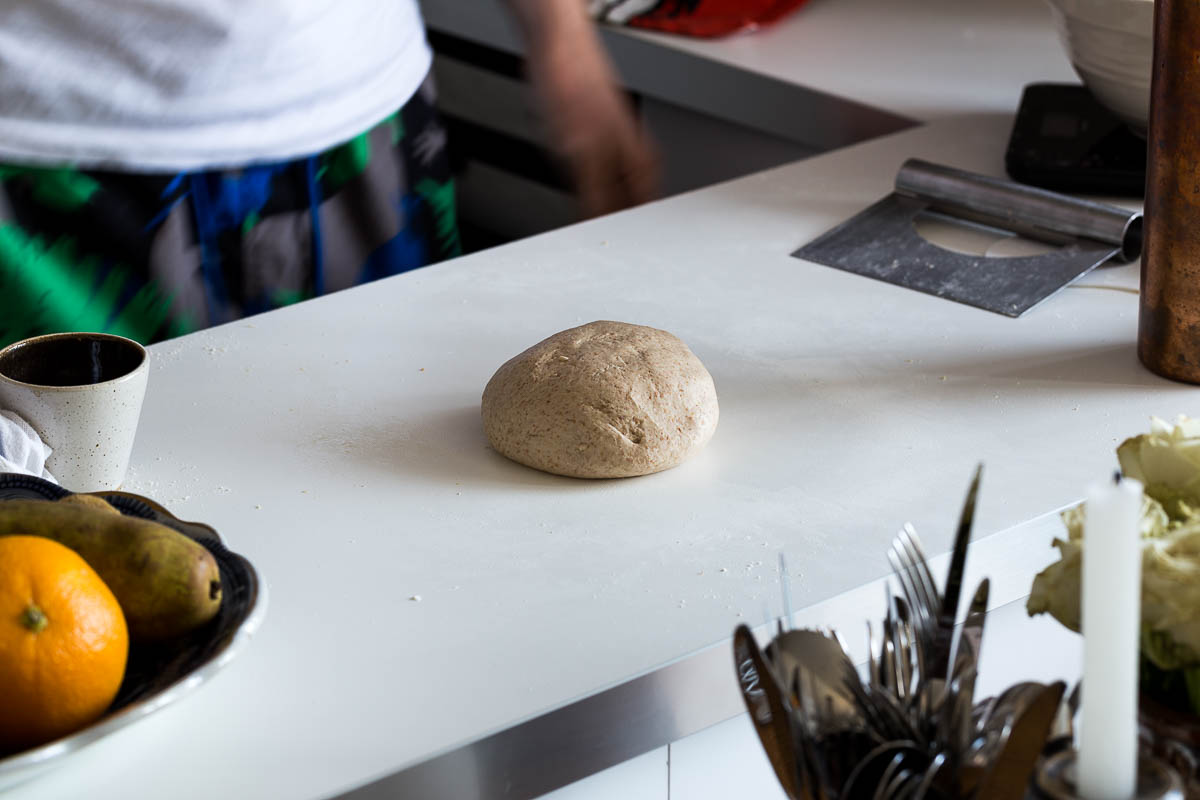 The 10 minute-kneaded half, notice how smooth it is.

No-knead Dough.
The no-knead dough looked rougher, was sloppier, stickier and didn’t hold it’s shape as well. This resulted in shorter, wider buns which didn’t rise quite as high. Once cooked, the no-knead buns were almost identical to the kneaded ones in texture, except they were marginally less springy when compressed.

Kneaded Dough
Whilst kneading for 10 minutes, there was little change in consistency aside from the dough smoothing slightly, but there was no real sense of the gluten ‘developing’. It required dusting quite frequently to prevent sticking and had a smoother appearance after 10 minutes. When shaping the buns, this dough was slightly firmer, which allowed the buns to hold their shape and rise slightly taller and more evenly than the no-knead. Once cooked, the kneaded dough had a more springy feel, compared to the no-knead. 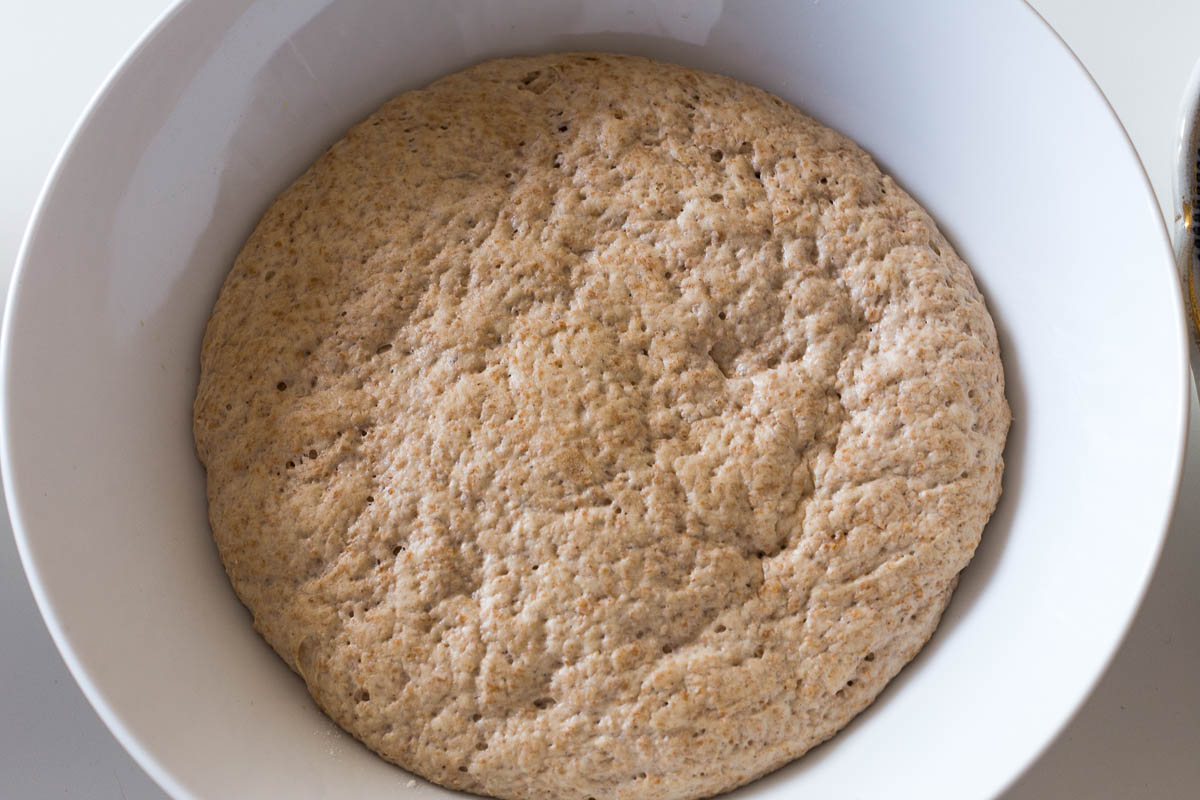 Un-kneaded dough after proving. Note how it has a very uneven patterning. 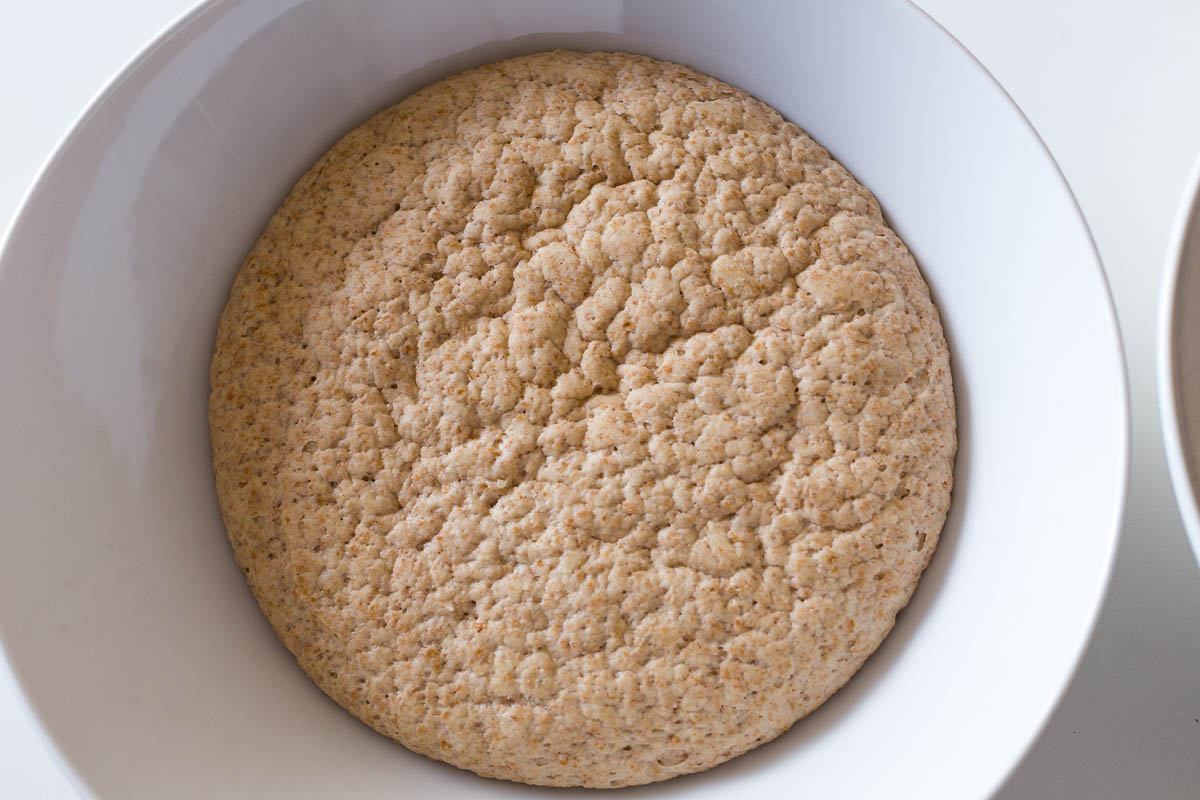 Kneaded dough after proving. Note how even the texture is. 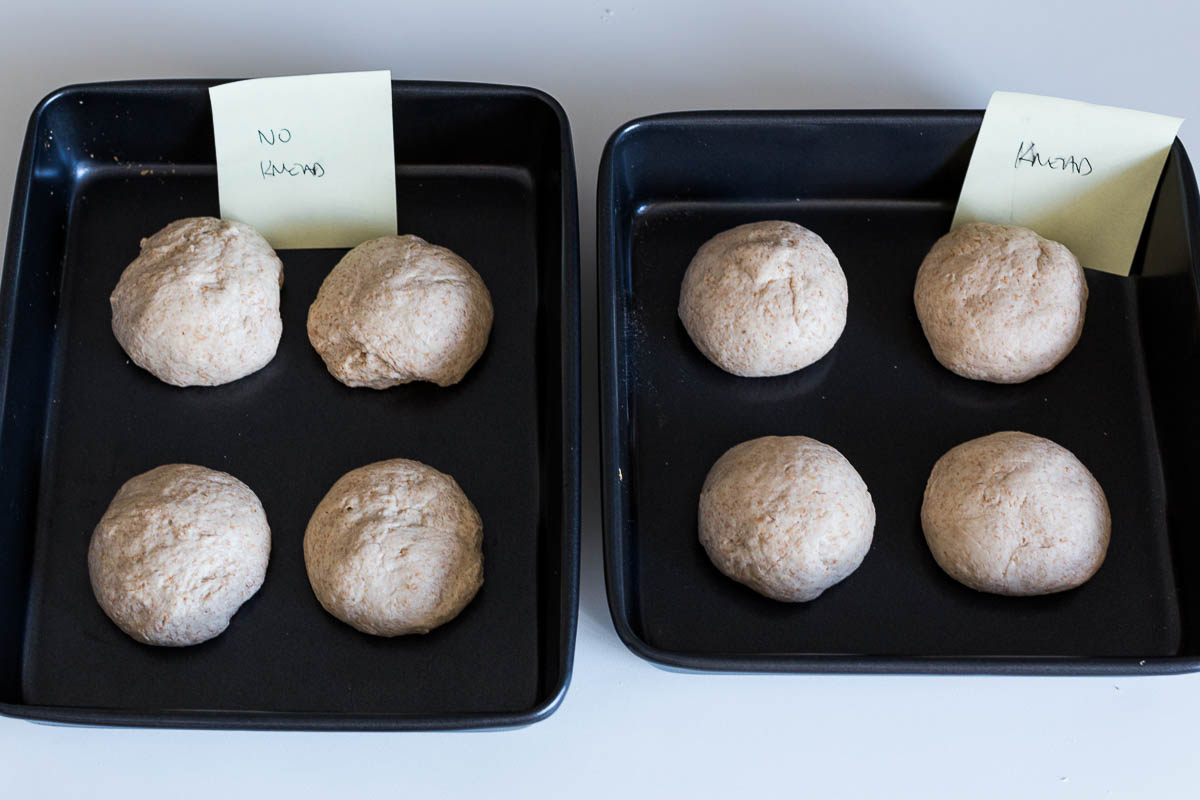 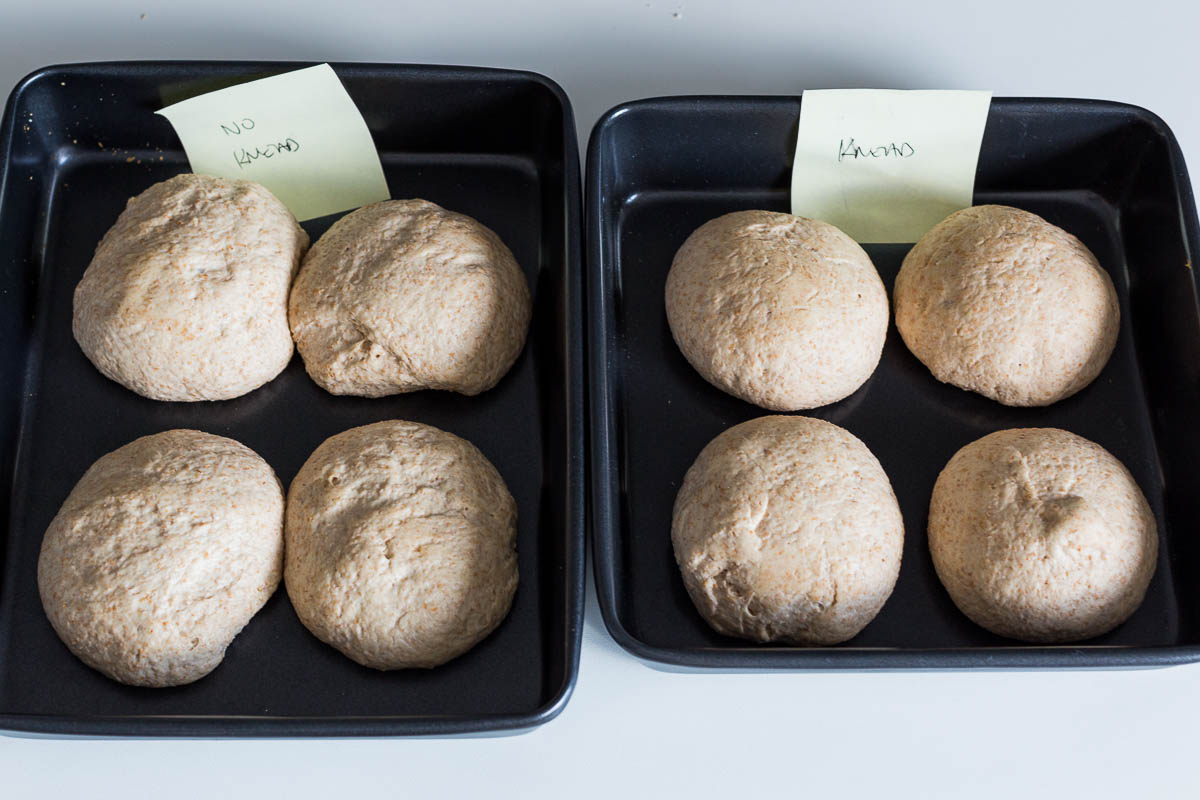 Does it make a difference? Yes, but a very small one.

Is it worth it? Only if you want to make shapes with the dough, or have spare time to kill.

It does help to knead spelt, but not in the same way as with regular wheat. I’d also question if 10 minutes is necessary, I felt that the dough smoothed out after a couple of minutes and not much happened after that. The gains from kneading spelt are marginal, especially with breads baked in a tin where no shaping is required. For a complex shape like challah, then kneading the dough would help to create dough which is easily handled and shaped.

Historic recipes are a great source of wisdom and a Roman spelt bread recipe on the internet advises kneading until the dough is ‘springy’. This seems the best advice, to simply work the dough until it’s smooth and springy. I certainly cannot see the benefit of putting a time boundary of 10 minutes on it. 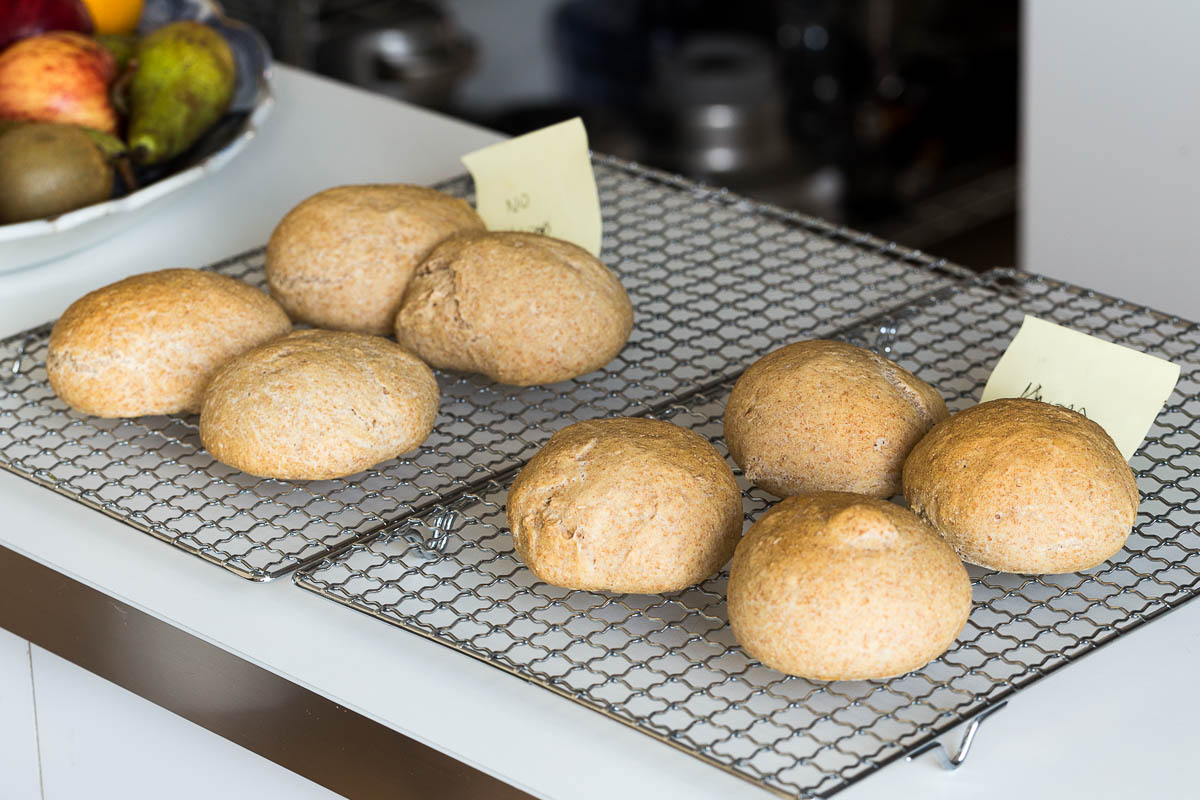 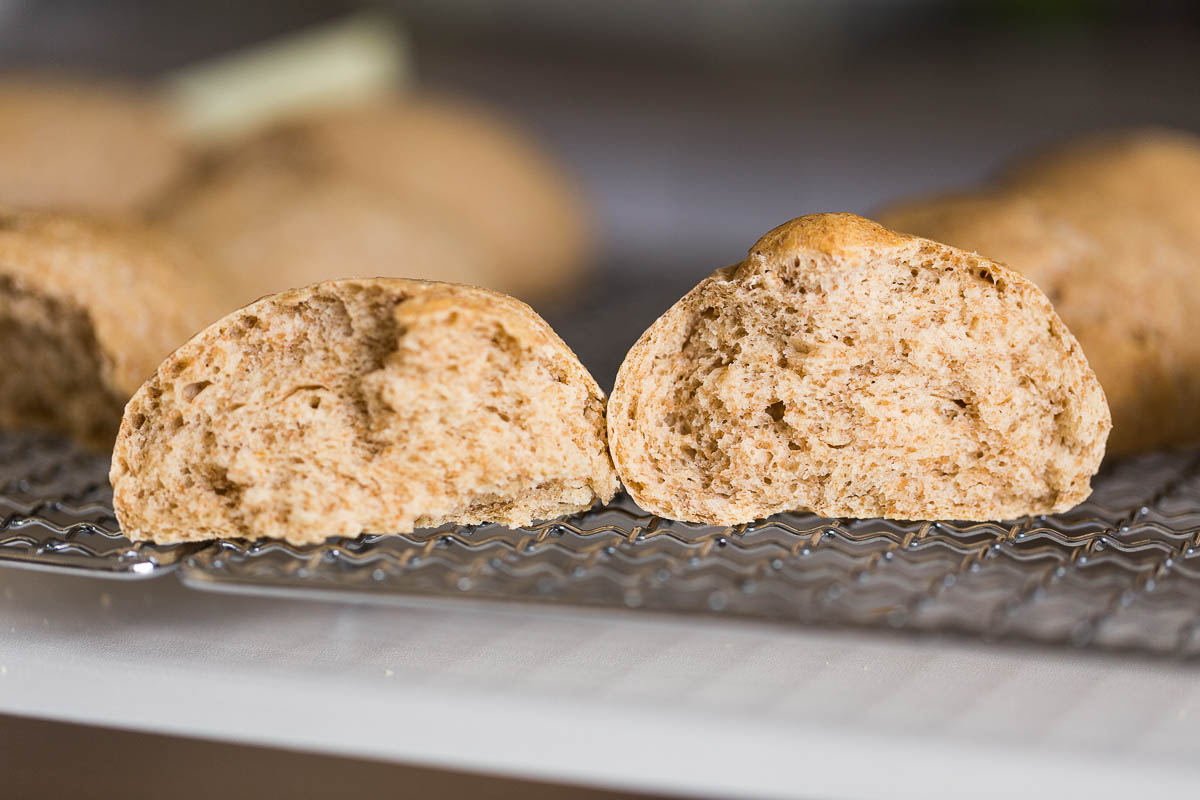 Spelt Buns – Do I Need to Knead Spelt?

Sift the flours into a bowl with the yeast and the salt.

Pour the water in and mix with a wooden spoon until combined.

Turn out onto a floured surface and knead a couple of times, just enough to bring the dough together.

Place in a bowl and cover with a damp tea towel, then leave in a warm place (about 25ºC) for 1 hour.

Turn the dough out onto a floured surface and knead it a couple of times. Shape into 8 buns and place on a baking sheet, then cover and leave to rise for 45 minutes.

Cook in the pre-heated oven for 15 minutes. Leave to cool on a rack.