Back in 1984 when Whitesnake released a song called ‘Slow An’ Easy’, big, permed hair was everywhere on grown men, along with awful double entendre permeating almost every sing title. Everything they created was about either love, or, errrr, loving. I’m dragging this questionable music, which seems to have aged in a way I never expected (i.e. well), back to the fore because I’m listening to it and the song ‘Slow N Easy’ has just come on, which is exactly what this recipe is. 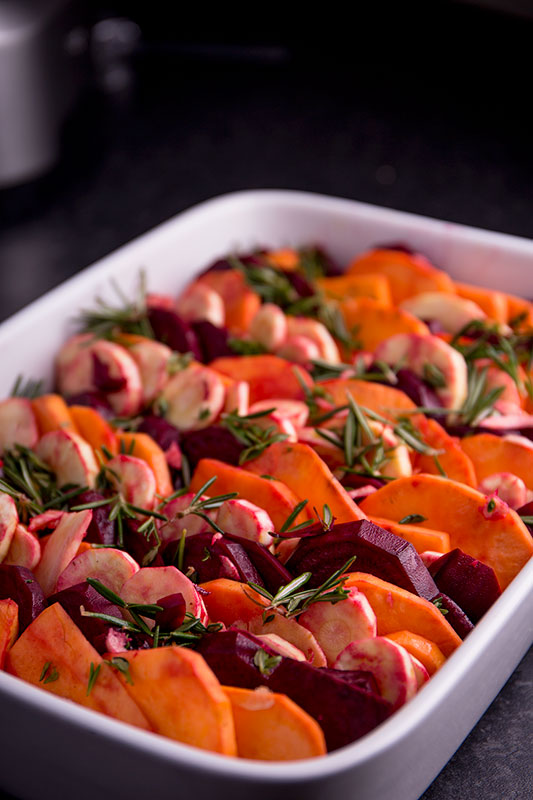 A few years ago I spent a summer holiday in Provence, marvelling at the quality of the local ingredients available. Everything just tasted better, or was bigger, brighter and fresher. I took a book titled ‘Cooking in Provence’ by Alex Mackay and Peter Knab with me, and it remains one of my favourite cookery books, a marvellous compendium of sun-soaked recipes. There’s one recipe in the book which I attempted on several occasions, something called a vegetable tian which I struggled to really hit the bullseye with, but when I did, oh boy was it good. A tian is a name for an earthenware dish in France, but in the same way we Rosbifs have given the name ‘casserole’ to both the pot and the food that’s made in it, the French also have a recipe which is a called a tian. 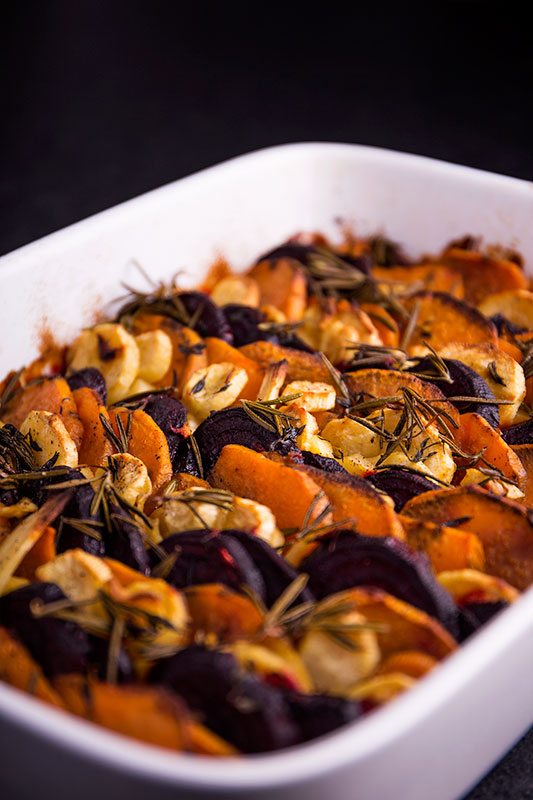 The tian recipe I was following in Provence was using typical provencal vegetables; onion, tomato, aubergine, courgette and thyme. The long, slow cooking creates a sun-dried sweetness in the veggies that just wouldn’t develop with just a quick blast in the oven. That’s the one important lesson I learned about making a tian, you cannot under any circumstances rush it. As Whitesnake very correctly stated, Slow An’ Easy is the way, although I guess they weren’t talking about Provençal cooking techniques. 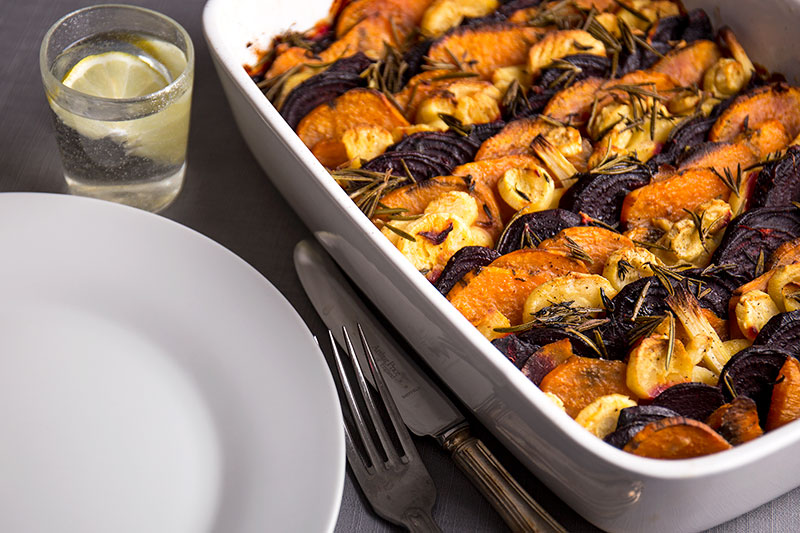 One of the defining parts of the tian for me is the caramelised onion base which the vegetables sit atop of. Again, these onions need to be cooked long and slow to really tease all of the sweetness out of them, without burning them which would create bitterness. Once you’ve taken care of those onions, then the whole lot needs to be left in the oven for a long period while these vegetables cook long and slow. I love long cooking times because it means you can prepare your dish and have it bubbling away in the oven, allowing you to relax prior to sauntering in and gorging with minimal demands when the time to eat comes around. 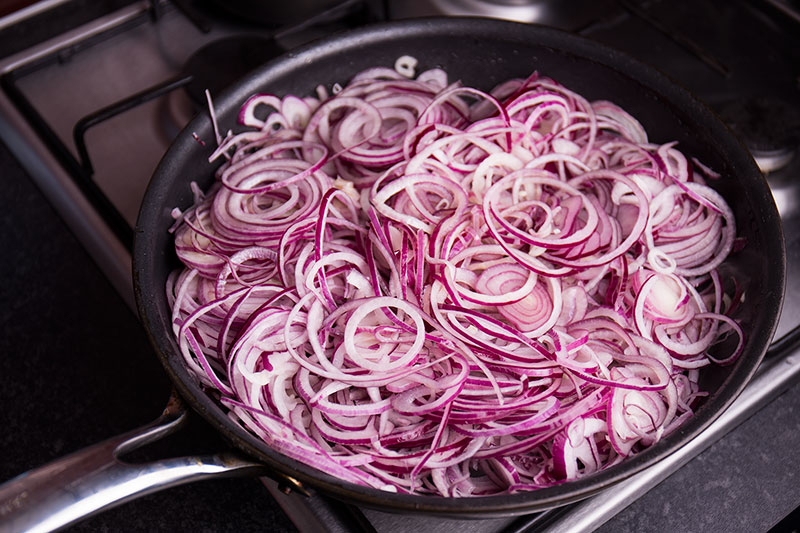 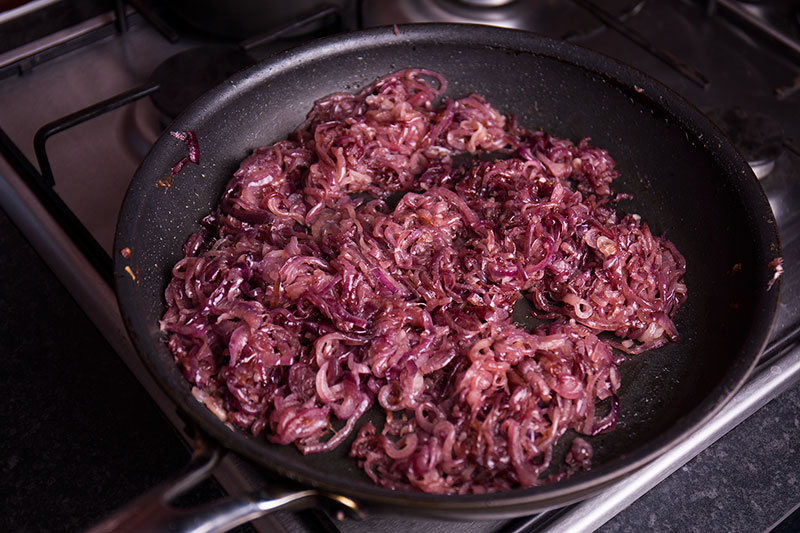 In today’s recipe I’ve switched those distinctly summery vegetables over for a more wintery dish, opting for red onions, root vegetables and some more chunky herbs. It all cooks down beautifully to a rich vegetable dish which improves over time, so well worth making plenty as any leftovers will taste even better the following day. 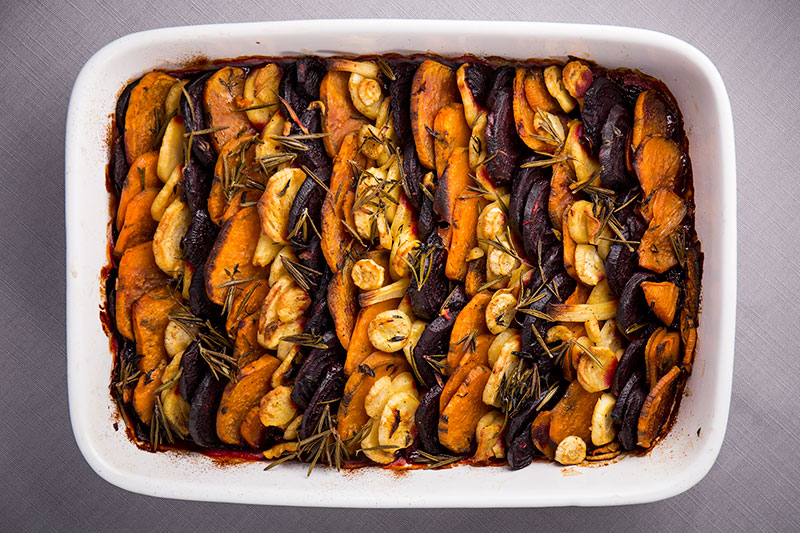 Heat 4 tablespoons of olive oil in a large frying pan over a medium heat. Add the sliced onions and salt and cook for approximately 1 hour, stirring occasionally, until they have cooked down to a dark, soft, sweet, sticky mass. If at any point you see the onions catching and browning at all, turn the heat down a bit, this should be a long, slow process.

Put all of the potato, parsnip and beetroot in a large bowl with the rosemary, thyme, olive oil and some salt and pepper. Mix well until all well coated.

In a ceramic roasting dish, spread the onions evenly over the bottom of the pan. Next, create rows of the root vegetables standing up in the dish, so place a row of sweet potato, then a row of parsnips, then a row of beetroot. Repeat until you have filled the dish up. Cover with foil and place in the oven for 1 hour. Remove the foil, turn the oven up to gas mark 5, 375ºC, 191ºC, 171ºC fan and cook for a further hour.