Add Some crunch to your lunch

Croutons are those crunchy, munchy accoutrements of soup which I have to say, rarely get much sway from me. They seemed like an unnecessary adornment to my soup, because I’m often going to get a large doorstep of toasted bread to suck the liquid life out of my soup and transfer it into my mouth, or I just want to eat/drink/slurp the soup, so adding some small bits of bread seems unnecessary. After all, surely croutons are just small, fiddly bits of dipping bread which disappear into your soup, to be lost forever.

If you transferred the concept of croutons into another aspect of food and drink, the nearest comparison I can think of is dunking rich tea biscuits into a mug of tea. Now I’m not a ‘two sugars love’ kind of guy, generally eschewing a good ol’ cuppa whenever it’s proposed in my presence. I’m just not a big fan of English Tea, but once in a blue moon I will partake. However, I am highly aware of the unabated joy that can be had by dunking rich tea biscuits into a large, rich mug of tea. When I was younger we even turned this into a competitive sport, seeing who was able to sustain the longest dunk and then transfer the biscuit, intact, from mug to gob without depositing tea-enriched, rich tea biscuit all about their person.

Besides, I actually have a point to make here, which is thus. Dunking is fun whereas soggy masses of bread or biscuit disappearing into your liquid refreshment are not. You wouldn’t break your rich tea biscuit into small pieces and then scatter it across the surface of your cuppa, would you? Likewise, I’m not too keen on small croutons disappearing into the subtext of my soup, especially if they’re going to turn into some kind of incomprehensible soup based amalgam. So why on earth would I write a recipe about croutons?

Because when you make them with solid, thick rye bread, they are very, very crunchy. Rye bread is dense and tough, in fact the first time I tried full rye bread (not the light, fluffy stuff which is white bread with a soupçon of rye passed under it’s nose) I made the mistake of substituting it for normal bread in a slap-up Friday lunch. My ex-business partner and I used to take turns making or buying lunch on a Friday which ranged from slap-up fry-ups to M&S salad selections via hearty doorstep sandwiches cooked in our lovely little office kitchenette. I decided to make Reuben-esque sandwiches one day, full of salt beef, emmental, pickles and French’s mustard between rye bread bookends. I’d never actually made sandwiches with dark, heavy rye bread before, so I gaily sliced it as I would any other bread. Being a Friday treat, we’d normally plump for two rounds each of whatever sandwich we made.

I think we started exchanging furtive glances at the end of round 1. That much rye bread was, errr, substantial. I can’t remember if we ate the whole lot or not, but I know it was too much, although that doesn’t mean I stopped eating.

The crunchiest rye croutons around

So rye bread is thick, heavy stuff. And when you dry it out, it takes a lot more effort than regular wheat bread to re-instate it or waterlog it. For instance, I made these rye croutons, scattered them across the hot soup, took a load of photographs, carried it back downstairs to the kitchen, filmed myself doing a video conclusion, twice, then ate it. They were crunchier than a job lot of crunchie chocolate bars that have been in the deep freeze. So if you want some croutons that are really going to give a firm, solid crunch and remain crispy between the kitchen and the table, rye bread is the way to go. 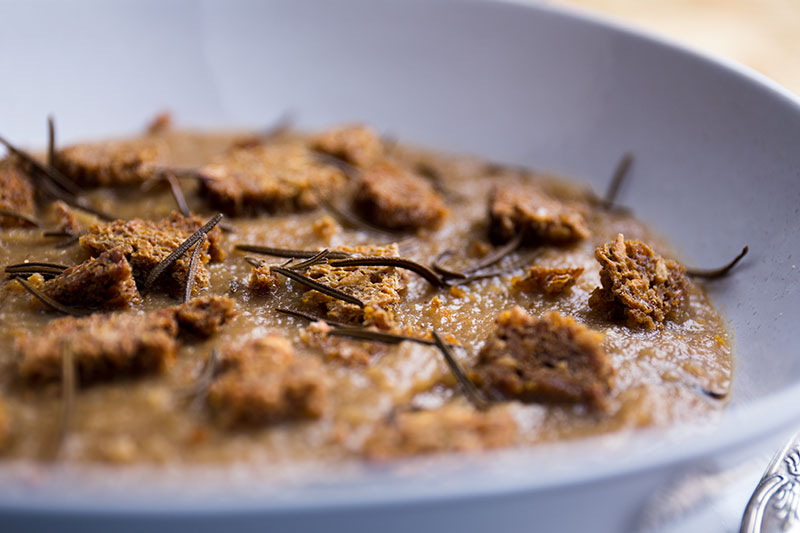 Rye Croutons with Garlic and Mustard

Rub the garlic all over the rye bread.

Mix the mustard with 1 tablespoon of water. Spread this all over the bread, so that it soaks into every part of it.

Place the bread on a metal grille over a baking tray, then leave in the oven for 2+ hours.