Today’s post is full of childhood reminiscences of gorging on piles of syrup soaked pancakes, and how despite this gorging, we never ate savoury pancakes. I’m redressing that balance in my life by creating simple, flavourful pancake recipes such as these rocket and goat’s cheese pancakes, topped with a rich, powerful pomegranate molasses and olive oil dressing. Once these goat’s cheese pancakes are taken care of, you can start the main job; sweet pancakes!

Best Day of the Year.

In every calendar year, there exists a small handful of very special days, which most children hold with a spectacular cachet, or at least, I did.

Christmas day was the highlight of the year with it’s magical myths of reindeer drinking the saucers of milk left in the garden, and father Christmas having hastily consumed the mince pie and brandy left for him on the garden table. Alongside the abundant presents and being bookended by a lack of school, it was hard to top. Me-centric Birthdays were also special, with cake, presents and a chance to choose where we had the party that year. Beyond those two hallowed days, Halloween was fun if there was a party with apples to bob and rubber bats to throw at girls. However, there was one particular day that had a spectacular stamp of pre-adolescent approval. Pancake day.

If I Learned One Thing…

Every year at both my Church of England primary and junior schools, we listened in assembly with unusual attentiveness to the story of pancake day, otherwise known as Shrove Tuesday, and it’s position as the day before Lent, which is 40 days of fasting prior to Easter. Such unequivocal interest in matters religious could only be inspired by one thing; a mountain of pancakes dripping in lemon, sugar and syrup, which was an inevitability as soon as I got home.

Uncontrolled excitement chased me home from school, as I speculated how many pancakes I could eat this year? 3? 6? 8? Frankly, I have no idea how many I ate as a child, but I can guarantee it wasn’t just 3. I ate five whilst making this recipe to shoot for this blog post. As a child of the 80s, sugar fuelled gluttony was OK, which might explain my penchant for sweetness as an adult, but child obesity certainly was not ‘A Thing’. 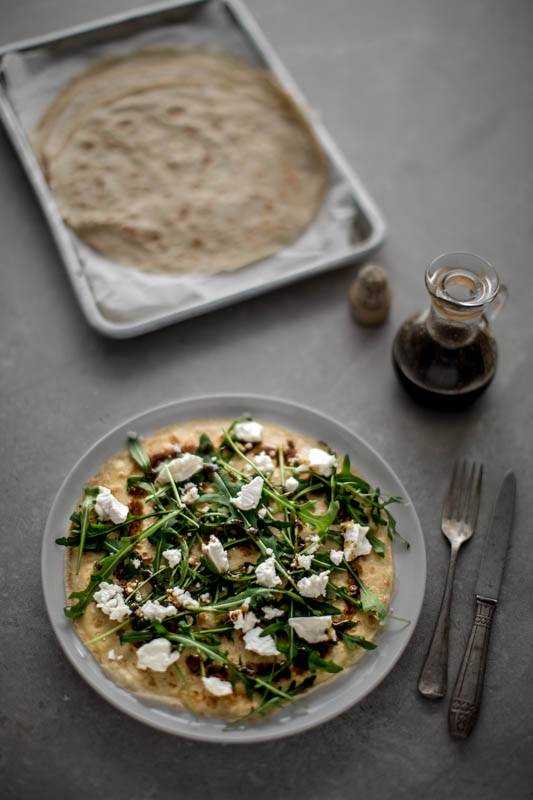 My brother liked maple syrup on his pancakes, this dark elixir was a treat occasionally delivered direct to these shores from it’s Canadian homeland by my great uncle who lived in Calgary. It was kept in the cupboard for special occasions, which shrove Tuesday clearly qualified for. I refused to eat maple syrup, for some unknown reason, even now I can’t think of an explanation aside from juvenile rebellion. I certainly haven’t let such whimsy get in the way of enjoying the stuff as an adult. I would only touch traditional golden syrup, or caster sugar with lemon juice, or, all three together, until my plate, face, hands and surrounding area were a sticky mess.

Pancakes in my childhood were cooked with lard, we even had a special pan for pancakes, a battle-worn aluminium implment from before the days of non-stick, brown edged from years of facilitating the maillard reaction and impeccably seasoned through even more years of exclusively melting lard and gently browning pancakes. It never saw detergent or scouring, it was a perfect cooking surface, as good as any non stick teflon coating you can find today. In fact, that exact pan features in my spelt pancake video, which you can watch here:

The first pancake never works. It’s the law. That one’s for dad. Once this sacrificial offering has been made, then it’s time to gorge. Cooking pancakes quickly enough to keep up with two young children is hard, especially when you have a father who is equally partial to the pleasures of these flat cakes, hence I can’t remember my mum stopping to eat many.

Then there the tossing. I’d happily make time between the eating to attempt flipping a pancake as high as it could go. Could I touch the ceiling? Unlikely, but I’ll bloody well try, thank you very much.

Sitting here, in my late thirties, I can still feel some of that excitement about pancake day, but one of the things we never indulged in was savoury pancakes. In my contemporary pancake world, savoury pancakes are vital, a shrove Tuesday dinner should comprise savoury cakes for main course and sweet ones for dessert, it’s the new law of Gavin.

A vital ingredient of these savoury pancakes is for them to be simple to construct, a make at the table treat, like the sweet feast of a dessert that’s to follow. Last week, I also procured a bottle of pomegranate molasses from Mr Olive Oil, which is a hidden gem of a shop in Clerkenwell. Mr Oil owns an electric store which has an incongruous olive oil section in it, stocked with products imported from his farm. Jamie Oliver and Gordon Ramsey are said to be fans and the oil is a delightful, fresh, peppery product and sits alongside the beautifully rich bottle of pomegranate molasses which I purchased.

Simplicity was the order of the day for these savoury pancakes, because any additional preparation would dilute the task at hand, of childishly eating piles of pancakes glistening with syrup. Hence this recipe merely comprises a simple handful of rocket, a crumble of goat’s cheese and drizzle of dressing made from just olive oil and pomegranate molasses across the top. Once these goat’s cheese pancakes have been devoured, it’s time to crack on with the main job. Now where’s that pancake pan? 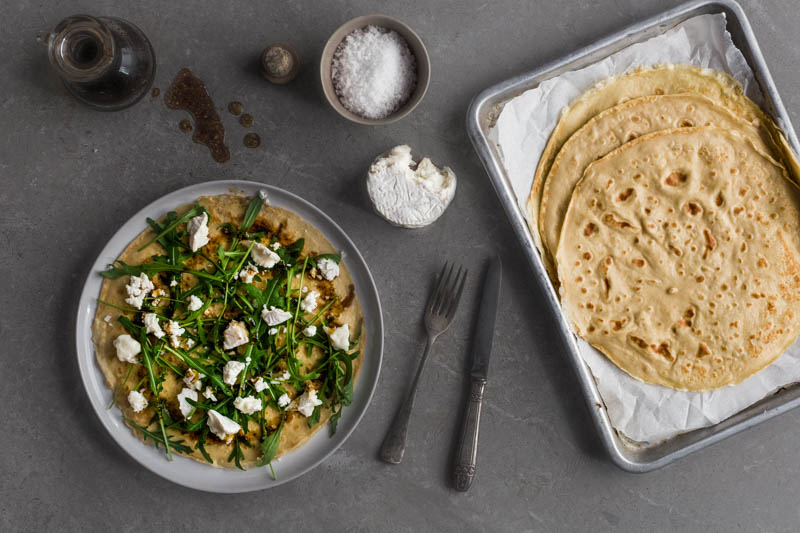 Cook the pancakes as per the recipe.

Sprinkle rocket across the pancake, then crumble goat’s cheese on top and a good grind of black pepper.

Drizzle the dressing across the top and you’re ready to go!