For once, I’m going to start talking about the food first, rather than sharing obscure excerpts from my prandial past with you.

Previously on le petit oeuf, I’ve professed my love for yoghurt and featured it in a few recipes. This has developed recently into a lean towards the delights of labneh, and anyone who is following my Twitter feed (and if not, why not?) will have seen a few more labneh based adventures, such as the za’atar rolled labneh balls. 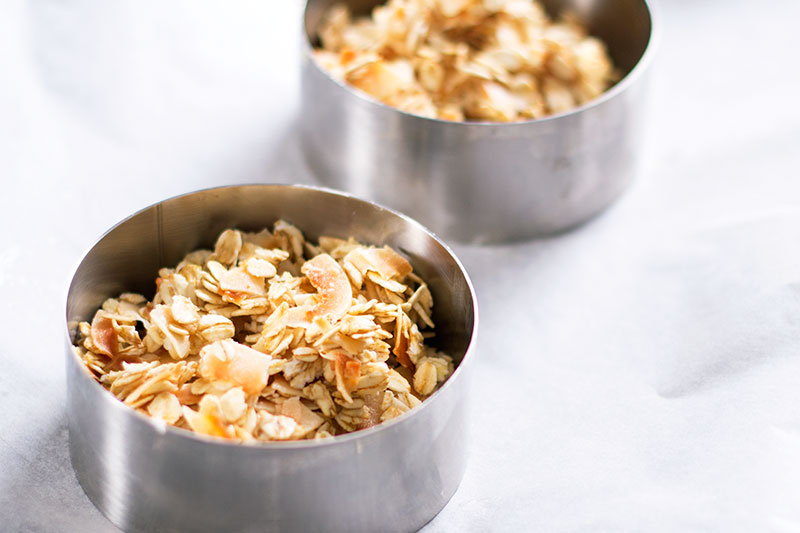 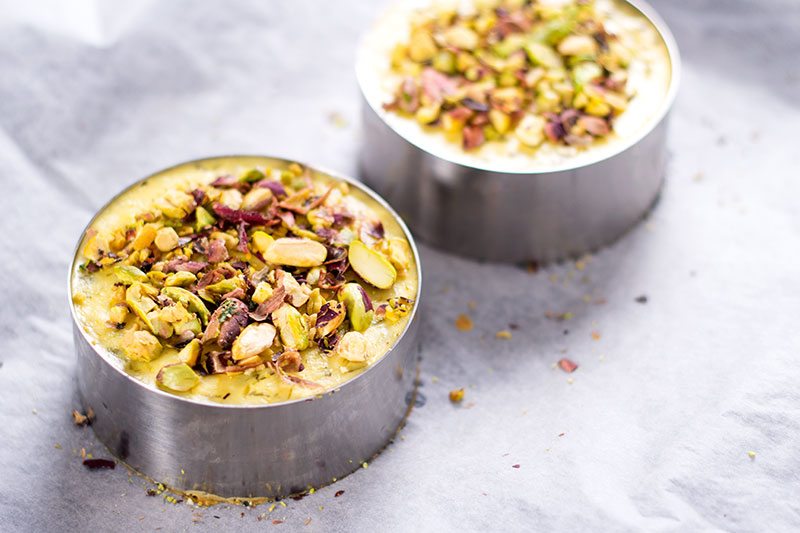 If you’ve never experienced labneh, let me explain a little more about it. It’s made from plain yoghurt that has been strained, a simple process that takes it from it’s initial runny state, via the greek yoghurt-ish phase before finally reaching thick, soft-cheese-esque consistency. If you want to give it a go, I published a simple guide to how you can make great labneh at home just last week which you can find here. The resultant labneh is sharp, tart, rich and creamy, but above all pretty irresistible and you can use it in sweet or savoury applications, or it’s particularly good at being devoured alone with a spoon. 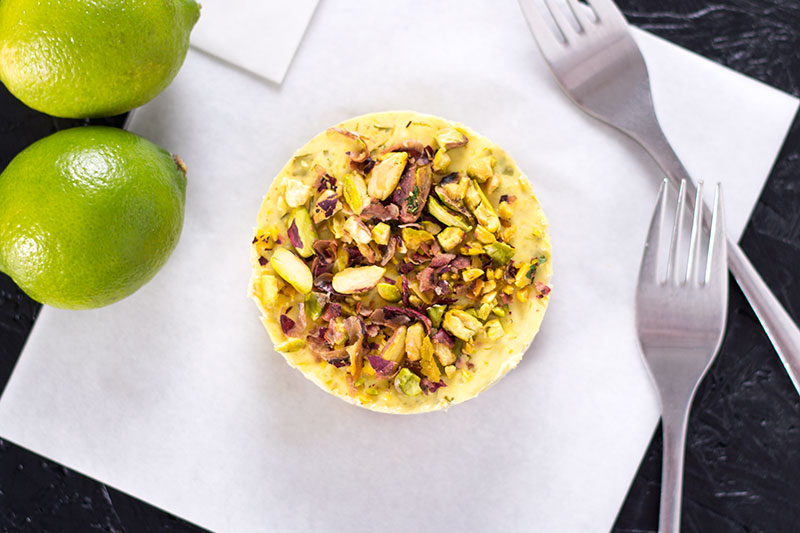 As my labneh adventures developed, I felt an urge to use it in other ways, which left me wondering if it’s texture and richness would lend itself to a cheesecake. So I launched myself into the kitchen with a pile of labneh and other ingredients for an afternoon of cheesecake experimentation backed up by Beethoven’s 9th to bring some gravity to the situation, for of course, cheesecake should not be taken lightly. 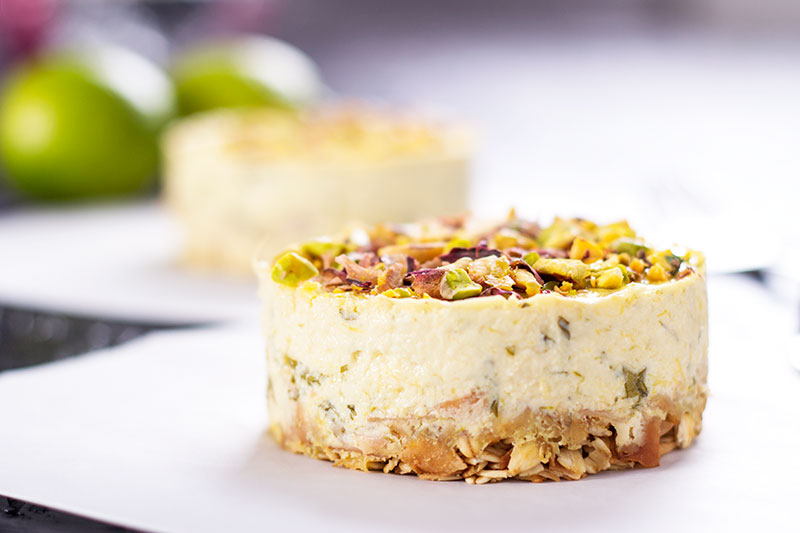 The result of that afternoon was a few little cheesecakes that were utterly delectable. There’s something about these labneh cheesecakes that’s fantastically rich, creamy and sweet, yet in a wholly natural way. Despite having no added sugar, they’re more than sweet enough to leave you wondering what the point of adding a pile of sugar would be anyway. And don’t let the coriander fool you, there’s nothing savoury about these as it adds it’s own aromatic sweetness to the flavour, hooking up with the lime in the irresistible way that it does. 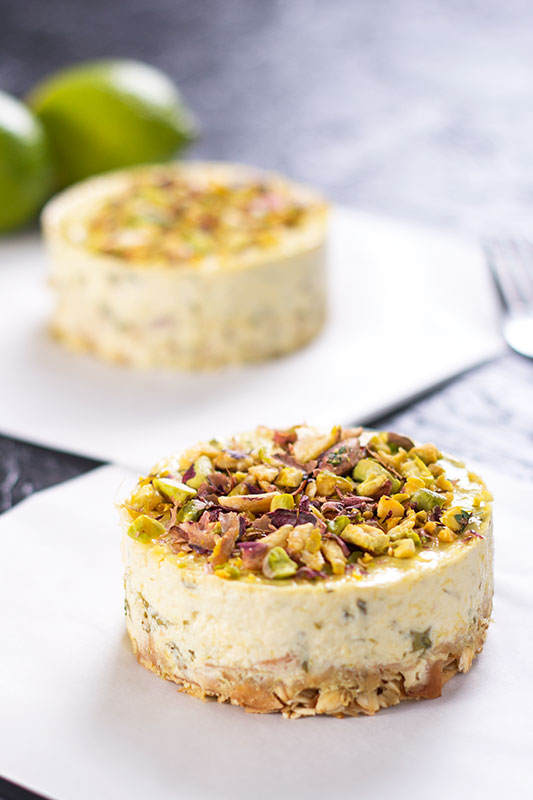 These mini labneh cheesecakes are bound to produce a big wow if you present them as a dessert, and are ideal dinner party puds that you can make well ahead and leave in the fridge until time for service. With the option for gluten free if you use gluten free oats and no added sugar, I sincerely hope you’ve run out of excuses not to try them! 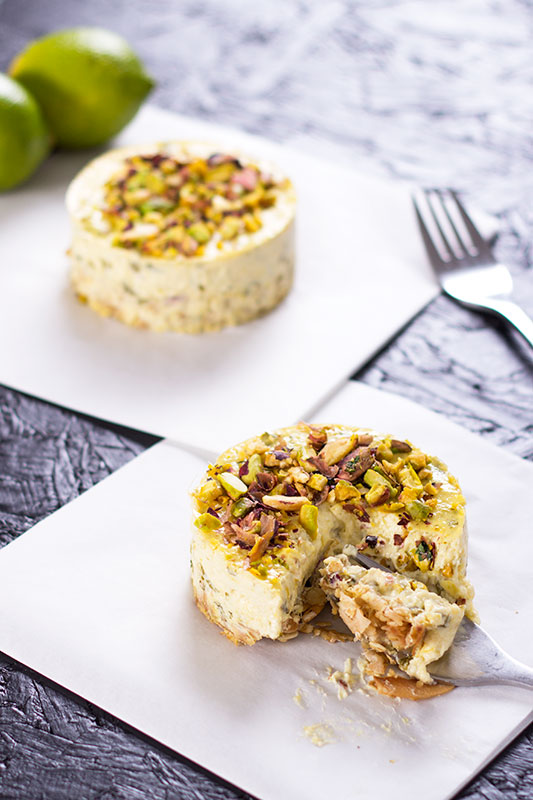 Labneh cheesecake with lime and coriander

Spread the oats on a baking sheet and place in the oven for 5 minutes, then add the coconut flakes and cook for a further 10-15 minutes until lightly coloured.

Remove from the oven, cool, then thoroughly mix with the coconut butter and egg white.

Place a sheet of greaseproof paper on a baking sheet, then grease the inside of the chef’s rings and place them on the baking sheet. Divide the oat mixture evenly between the four rings and press it down firmly to make a compressed base layer. Cook in the oven for a further 15-20 minutes, then set aside to cool.

Combine the mango, labneh, coconut cream, eggs, lime zest and juice and leaves in a mixing bowl and whisk with an electric mixer for a few minutes until thoroughly combined.

Pour the mango mixture into the chef’s rings, filling them to the top, then place in the oven for 60 minutes.

Remove from the oven, top each cheesecake with crushed pistachio and leave to cool. Run a small, thin knife around the outside of each cheesecake before gently lifting the chef’s ring off, then chill before serving.