It’s been quite savoury around here recently. Not much sweet goodness going on, and my God, was I longing for something sweet. So today’s post is about some utterly delightful little maple pecan spelt muffins topped with oats which are dairy free that I put together last weekend. These are muffins made with a mixture of wholemeal and white spelt flour, along with whole oats and sweetened using maple syrup and that ubiquitous banana, because it just goes so well in baked good like muffins. And who doesn’t like banana? (Yes, I’m sure there’s someone). 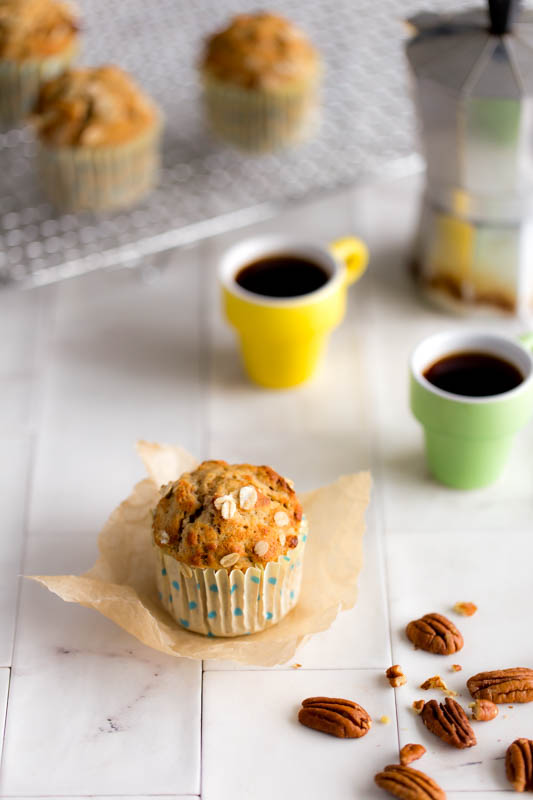 I’m quite fastidious about how much cake I eat, I’ve developed an incredibly strong sense of moderation around it. This is because I have a spreadsheet I’ve kept for posterity, which dates from 2008, when I tipped the bathroom scales at nearly 100kg, well over 15 stone. Approaching 100kg had been pretty scary for me, even though it’s an arbitrary figure, it simply seemed like a lot of mass to me and I was shockingly unfit. I had finally realised that my weight had only gone in one direction since I left school and nobody was going to change that for me, I had to do it myself.

I entered a period of concerted physical exercise alongside cessation of oversized portions, takeaways and most importantly, snacks. Snacks were the killer. Cakes, crisps, sandwiches, sweets and chocolate. All of those little bundles of joyous flavour and sweetness betwixt meals didn’t officially count in my subconscious food notation, because they’re not part of breakfast, lunch or dinner. In fact, I didn’t even eat breakfast back then, and regardless of how much cake I’d eaten, I still felt a God-given right to a large, filling dinner, preferably one which left me utterly and completely stuffed post prandially. 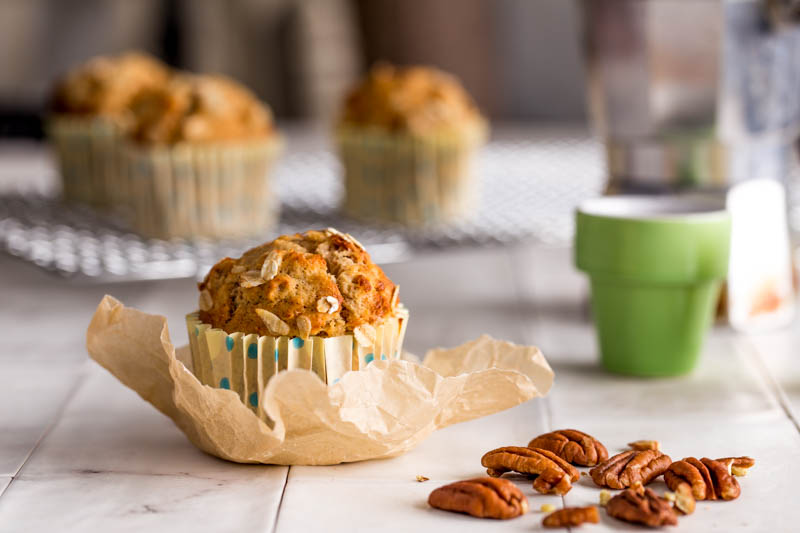 So I cut them all out, it was awful. I remember driving back from a client’s office on a rainy day, sitting at some traffic lights and staring through the rain-glistened window at a Tesco Metro store, fantasising about going in there and buying a chocolate croissant or three and stuffing them in my aptly named cakehole. Being hungry was not a phenomenon I was familiar with. If I was hungry, I ate, because I assumed that hunger was my body’s way of saying it required more food. I had never realised that my body actually requests more food than it really needs, the greedy bastard. Living with hunger was probably the hardest part of the whole process. Physical exercise and cutting portion sizes was a simple process and not eating snacks was a straightforward exercise in self control, just saying no.

But the hunger was the invasive part of the process that came between meals and separately from the smaller portions. It crawled under my skin, seeping through my veins and getting into every crevice of my body and my subconscious, making me do things I didn’t want to. It was a process of recalibration, of redefining the parameters of my physical intakes. Luckily, my motivation to lose weight was so strong that the inevitable lapses in my efforts were met with shame and guilt, both feelings strong enough to negate the fleeting ebullience of a sugary hit entering my body. 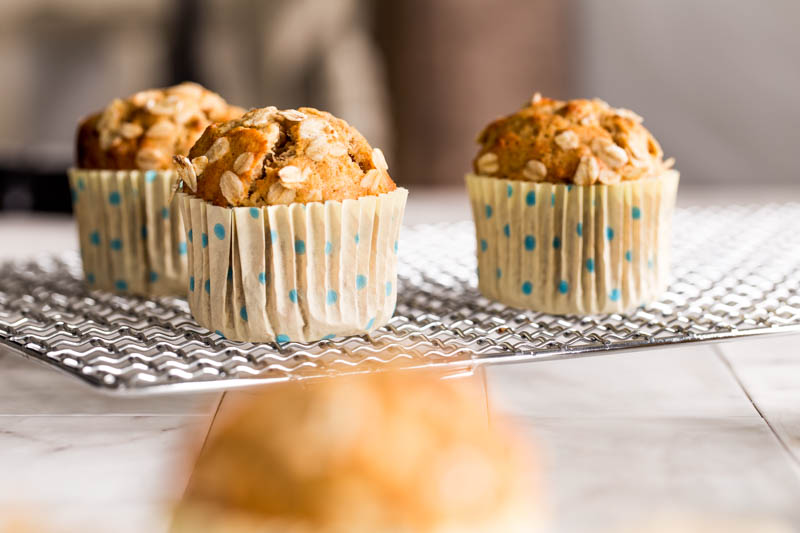 Over the following six months I lost about three stone, which I was pretty happy with. Then it plateaued for a while, before dropping again to nearly four stone below my original weight. The additional weight loss was because I stopped drinking alcohol. That was all, I stopped drinking alcohol and at least half a stone fell off me almost immediately, plus a bit more when I took up yoga and got a dog. I’m turning forty next year and I’m rather proud of the fact that I weigh nearly four stone less than I did when I was thirty years old. This makes me the antithesis of male weight patterns, because I sliced off the excess part of myself that was surplus to requirement and I’m in better shape in my late thirties than I was in my late twenties. 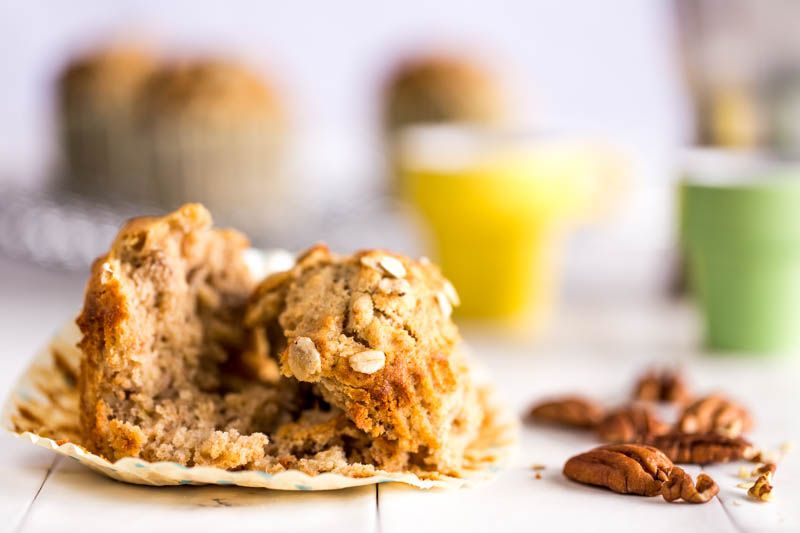 Once I got through the recalibration of what hunger really means to me, I found far more happiness in being a lithe, slim man than I did in the compulsive consumption of any cakes or snacks. I’ve retained the willpower to keep control over when I eat cake, and I’ve retained my defensive stance on snacks between meals, unless it’s fruit, which I now eat voraciously. When I make my own cakes, I want them to be better for me, which is why I love working with spelt flour and alternative sweeteners to good old white sugar. When I create something, it will probably have fewer calories than a traditional cake, but also, the calories it does contain will fulfil slightly greater nutritional benefit than a massive pile of butter and white sugar.

Hence today’s maple pecan spelt muffins which started out as an experiment with oats and maple syrup. They have a beautifully rich sweetness to them, the maple syrup being the key player there, alongside the banana which ensures there’s no sweetness box left untucked. I love the slightly undefinable wholesomeness of muffins made from spelt flour and whole oats, it’s a bodily feeling that’s hard to put a finger on. My old business partner once summed it up when I brought some cakes into the office from The Bread Shop and offered him one without mentioning they were 100% spelt. He ate it and simply asked if it was different, because it felt healthier, almost lighter. On top of all that sweetness and wholesomeness, you’ve got pecans and vanilla which ensure these muffins have a depth of flavour that’s going to have you re-iterating how healthy they are, just before you hear yourself saying “just one more…”. I know I did. 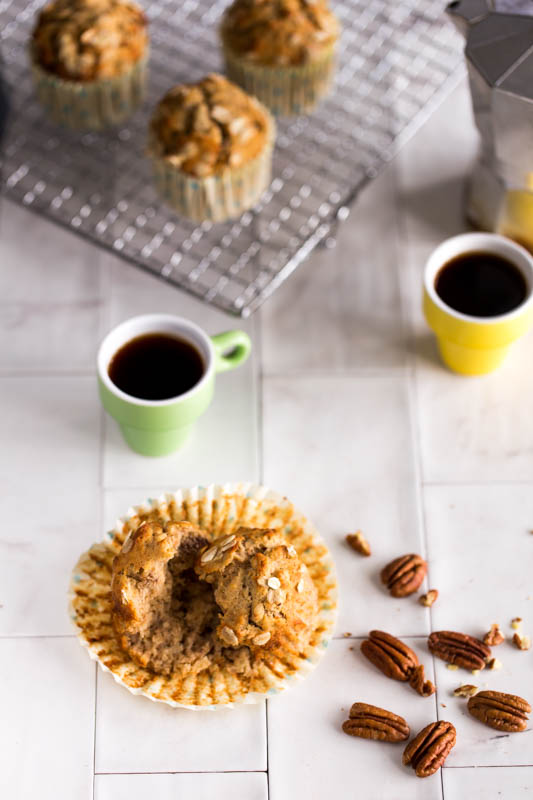 Sieve the flours, baking powder and salt into a large mixing bowl. Mix in the oats and pecans so that they’re evenly distributed.

In another bowl, mash the banana to a pulp. Add the oil, syrup, vanilla extract and egg. Whisk this all together until it’s all mixed thoroughly with just a few lumpy bits of banana here and there.

Add the wet ingredients to the dry ingredients and mix it all together, making sure you scrape all the flour off the bottom of the bowl.

Pour the mixture into your muffin cases, filling about 90% of the way up, almost to the top. Scatter oats across the top of them all.

Place in the oven and bake for 15 minutes, checking after 10 minutes to see if they are cooking evenly on top. Turn the muffin tin around if not. The muffins should have a nice golden colour on top, if not, cook for a couple more minutes at a time.

Remove and allow to cool for 10 minutes, then take the muffins out of the tray and leave on a cooling rack. Eat.