Today’s recipe is a chickpea and red pepper salad jewelled with delicious, crisp pomegranate seeds and dressed with a pomegranate molasses dressing infused with za’atar, which I knocked up in a hurry whilst trying to use up some leftovers. Yes, I genuinely had everything except the rocket knocking around in the cupboard. I keep an excessively large jar of roasted red peppers in the fridge and I was gifted a couple of enormous pomegranates along with a whole basket of other fruit and veg by my neighbours, after I cut down their trees for them (I had asked first). 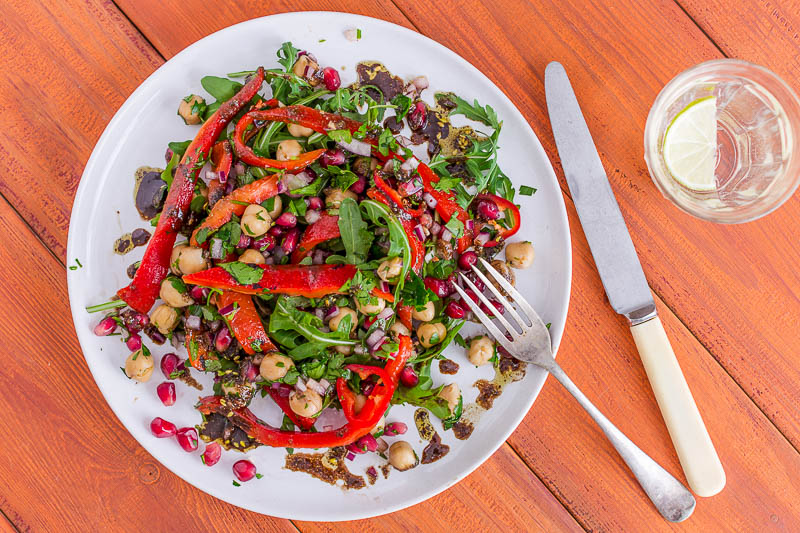 The Best Olive Oil in the UK?

The basis of this dish goes back to an unassuming side street in Clerkenwell, a short stroll down the road from City University, the seat of learning where I study Food Policy. There exists an electrical store, a purveyor of junction boxes, consumer units and most incongruously, sublime olive oil. I’d heard about this truly hidden gem through the grapevine, without even a name to look for, I was simply told to look out for the electrical store around the corner.

Inside this little place, the bare concrete floor dirtied by the footsteps of a thousand tradesmen, sits some industrial metal racking along the right hand side of the shop, dusty and unkempt as if it were plucked straight out of a warehouse. Instead of being a stockpile of E27 7w LED lamps, it’s fully laden with bottles and cans of olive oil both small and large, along with pomegranate molasses and packs of olives.

The friendly owner and his acquaintances were extremely welcoming, proffering shots of the oil to try and also enquiring where I’d heard about them, because they’d had a rush of orders that day and things were quite busy on the olive oil front. They’d recently been voted third best olive oil in the UK by the Independent, despite their product only costing £6.90 a bottle, a full 75% cheaper than number one, which was £28.

Tasting the oil, it was light and clean with a gentle peppery aftertaste, it was sublime. When they also poured in a drop of pomegranate molasses, wow, I was sold, it was an amazing elixir, syrupy, sweet, yet slightly sharp and I immediately knew this would be featuring in my salad dressings this summer. 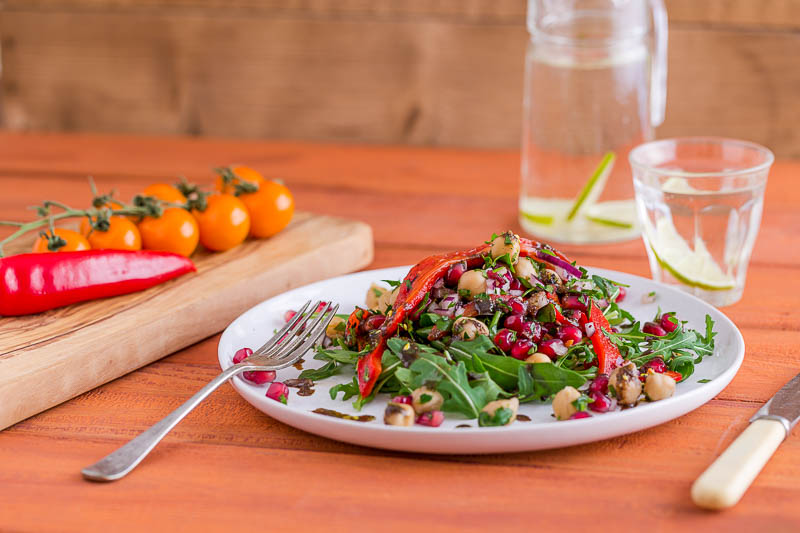 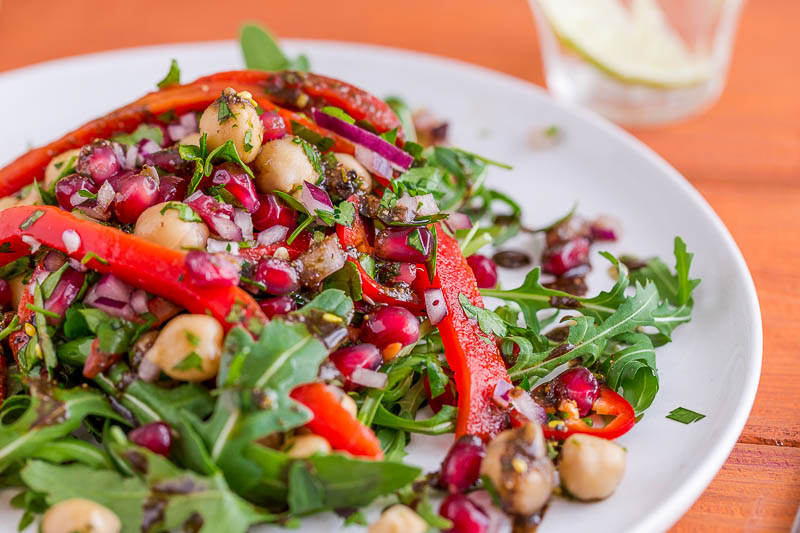 Back in my kitchen, this salad was just a no brainer, I simply grabbed what was available and put it together. At first I overpowered the dish with the molasses, but second time around, making it to photograph for this blog, I tweaked the dressing and made it a little more delicate, otherwise those pomegranate seeds will just disappear, their flavour hidden and taken over by the rampant sweet piquancy of the molasses or beaten into submission by the Za’atar (which I struggle to moderate my doses of).

It’s a light salad, one that makes a good side dish or would benefit from the addition of some feta cheese and some bread if you want to make it into a meal. I ate it for two days in a row, supplemented with some crackers topped with cheese and the last of the Christmas chutney that I made for my family. Either way, it’s delicious and bursting with flavour, ready to welcome in the beautiful summer that’s hiding, just around the corner.

If you want to visit Mr Olive Oil, you can him at Embassy Electrical Supplies, 76 Compton St, Clerkenwell, London EC1V 0BN. They’re open Monday to Saturday and just a short walk from the delicious foodiness of Exmouth Market. 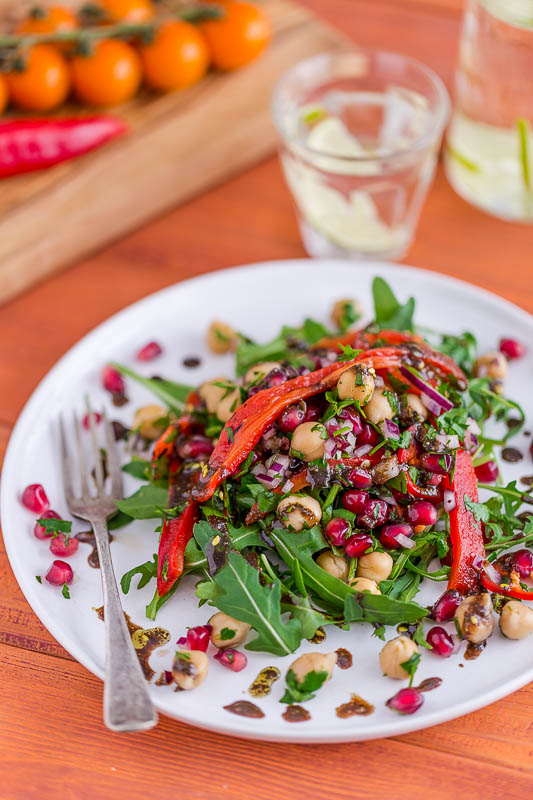 Mix the chickpeas, parsley, red onion, pomegranate seeds, red peppers and chilli together in a bowl.

Mix the olive oil, molasses and za’atar together, then season with some salt and pepper. Pour this over the chickpea mix and then lightly toss it together.

Place the rocket on your plates, then spread the salad mix over the top.