Today I’m talking about gravlax, or gravalax, or gravadlax, or even Gravad laks depending on where you are, who you are and why you’re here. There might be other spellings that I’m missing out, but so far I’ve covered Norwegian, Swedish and Danish as well as the slightly confused situation in England where it seems to go under a few of those names. However you spell it, this is an absolute peach of a recipe, a personal favourite of mine which gives smoked salmon a run of it’s money without having to go through that messy process of smoking. 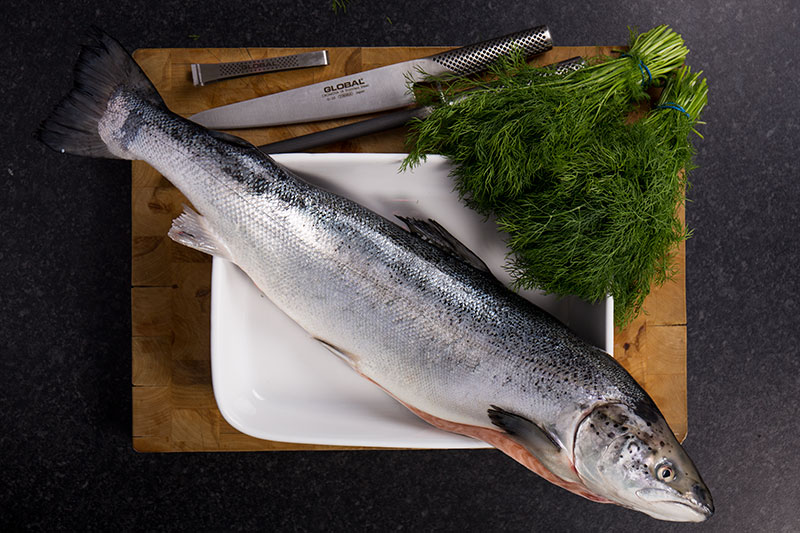 It’s also another super long-make recipe which is more like a small food side-project rather than a recipe. There’s no way that you can describe a 48-36 hour make time as a quick-to-throw-together meal or easy dinner, this is something completely different, which creates astoundingly tasty results that I can happily gorge on for days on end, making it worth every second of that wait. Like many recipes that require several days, there’s not actually very much that you need to do, it’s really straightforward and just a case of putting a few things together then leaving it in the fridge for the magic to happen, while you go about your day to day life.

Gravadlax is cured salmon and curing is the process of preserving meat or fish by salting it, drying it or smoking it. Ham is cured pork that has been brined (soaked in salted water) and is sometimes dried as well. Smoked salmon is salted or brined (soaked in salted water) and then smoked. Salt cod is salted and dried cod. All of these are methods of curing, and gravadlax is salmon that has been cured with salt and dill.

The process of making gravadlax is a very simple procedure which creates a finished product that I didn’t believe was possible at home. This is also a post-Christmas post for a very good reason, because it’s become my own little tradition to make gravadlax every year for the festive season. I then spend the rest of the break eating way too much of this delicious cured fish, but this time I’ve decided to share all the details with you. 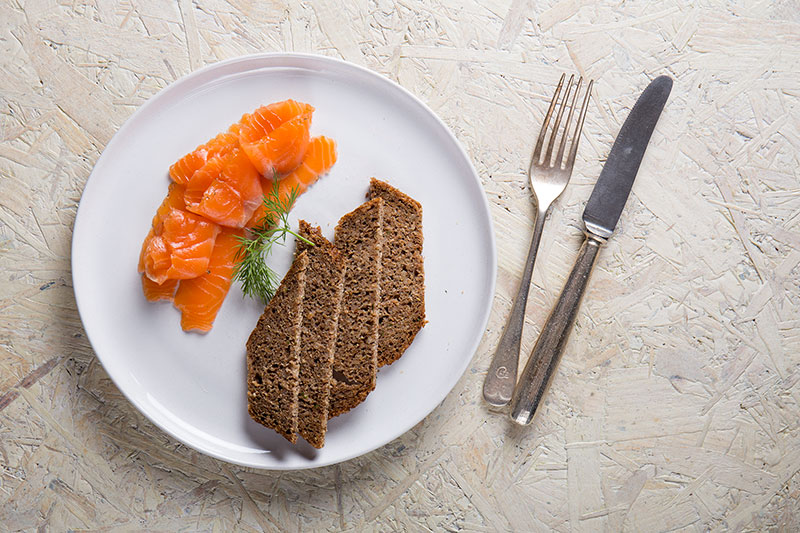 The process behind making gravalax is actually very very easy. You just need salt, pepper, sugar and dill, plus a load of salmon.

How do I choose the salmon?

Gravadlax can be made it with supermarket salmon, but if you spend a bit more money and buy more expensive, higher quality salmon, it might taste a bit better and be more beneficial for the planet. Who would have thought that better quality in = better quality out, duh. So now that I’ve demonstrated that vignette of gravadlaxian economics, you can go away and decide exactly how much you want to spend on this little project with that in mind. 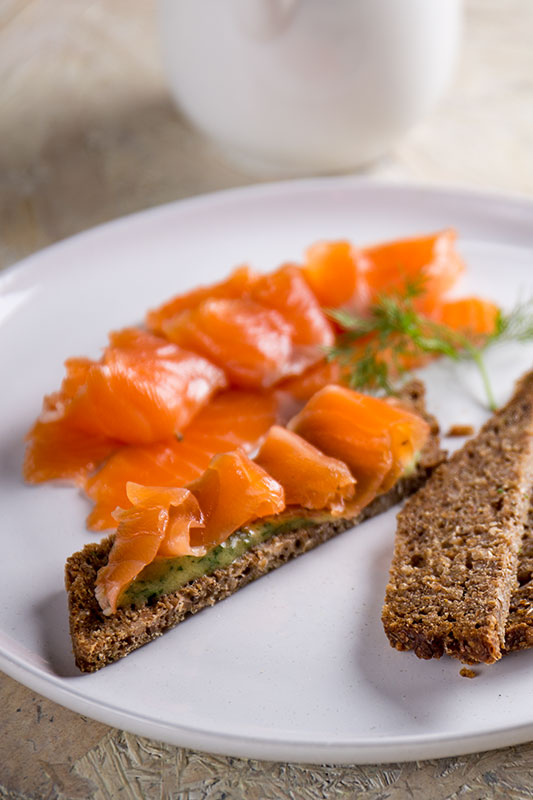 If there is one thing which is important, it’s the freshness of the fish. That’s your number one priority.

Checking the freshness of fish in a shop or market is a minefield that I find incredibly scary, despite having spent years trying to practice it. I get nervous that the fishmonger is judging me as I look around, eyeing up their stock. Call me cynical, but I always feel afraid to ask if it’s fresh, because I assume that would be some kind of insult, like asking a band if what they just played was music, or if someone’s most recent painting is art. Of course they’re going to say yes. The key is to be slightly more specific, and from my experience fishmongers are generally quite friendly. Just tell them that you’re going to make gravadlax, hence not cooking the meat, so can they give you the freshest piece they have. In this instance they should see to your requirements to ensure no-one’s being put in any danger.

If you don’t have that luxury, there are some key points to look out for when buying salmon fillets. They should be consistent in colour, relatively dry looking and definitely not slimy, and they should smell fresh and appetising, not fishy and funky. If you’re buying a whole salmon, rather than fillets you want to look at the eyes, as these are the number one easy-to-spot freshness tell-tale. They should be plump, clear and bright. If they’re sunken and dark, then the fish ain’t so fresh. The smell test also applies, you want the clear, fresh smell, rather than peculiar fishy. The skin should also be shiny and the fish should be relatively firm, rather than seeing dull skin and soft, yielding flesh.

The sure fire way to clear up any doubt about the health of your fish is to freeze it prior to making the gravalax. This won’t suddenly make it fresh again, but it will kill off any nasties in the fish which takes you a step closer to being all clear. 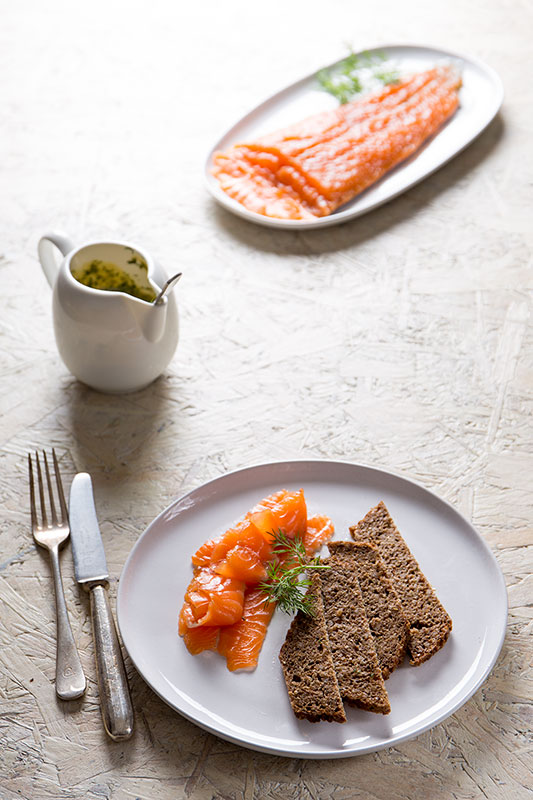 Cures come in all types of styles, from highly flavoured, modern, stylised recipes which suggest only brief periods of curing through to heavily salted ones which recommend a very long cure. Gravadlax was traditionally a method of preserving salmon to make sure you had some fish for the winter ahead so the original methods would have been heavy on the salt, to really make sure as much moisture was extracted from the fish as possible, hence increasing it’s likelihood of survival during those colder months.

Today, we have the luxury of fridges and well stocked fishmongers and supermarkets, meaning we can choose to cure and consume whenever we desire. However, I often prefer to stick to the traditional side of things, so I use a Danish recipe which is well balanced between salt and sugar, but does give a slightly salty end product, something I particularly like. Once then end product is combined with the mustardy, vinegary, dill sauce you have a fantastic flavour combination with the saltiness sinking back slightly. However, that is my one caveat, only try this if you’re the sort of person that likes ready salted or salt and vinegar crisps, I’d hate for you to spend the time and money creating a beautiful slab of gravadlax only to think it feels over-seasoned. 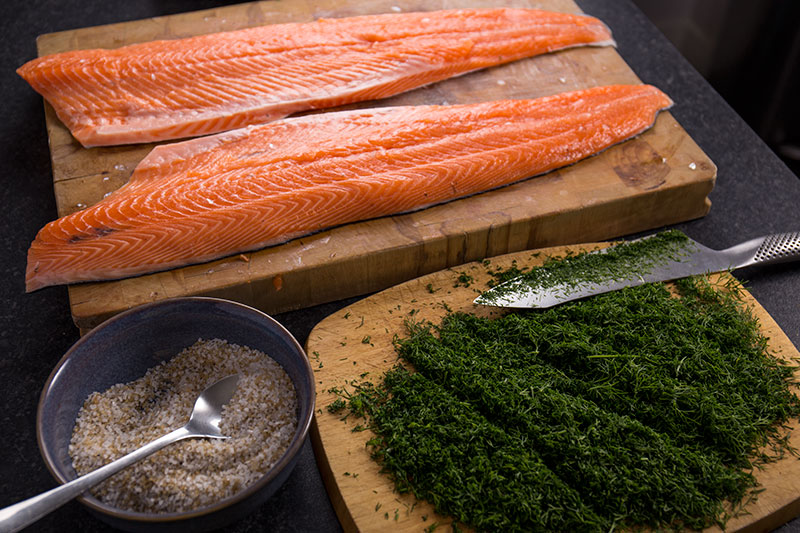 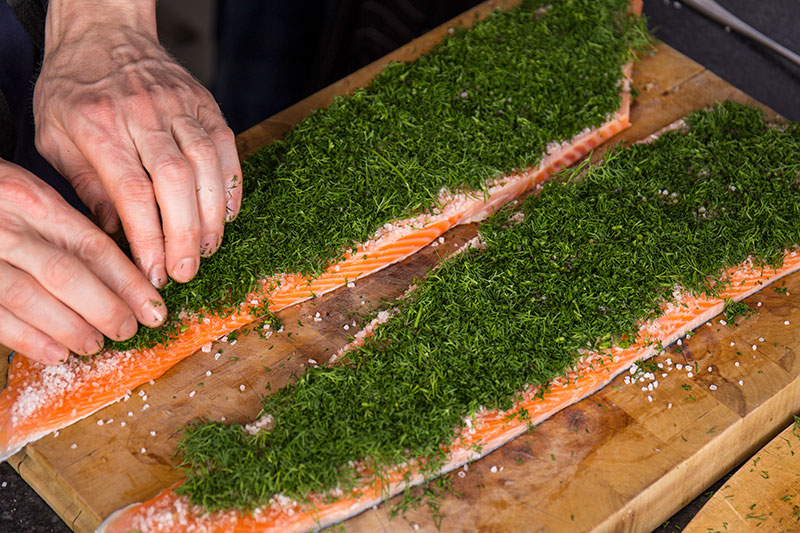 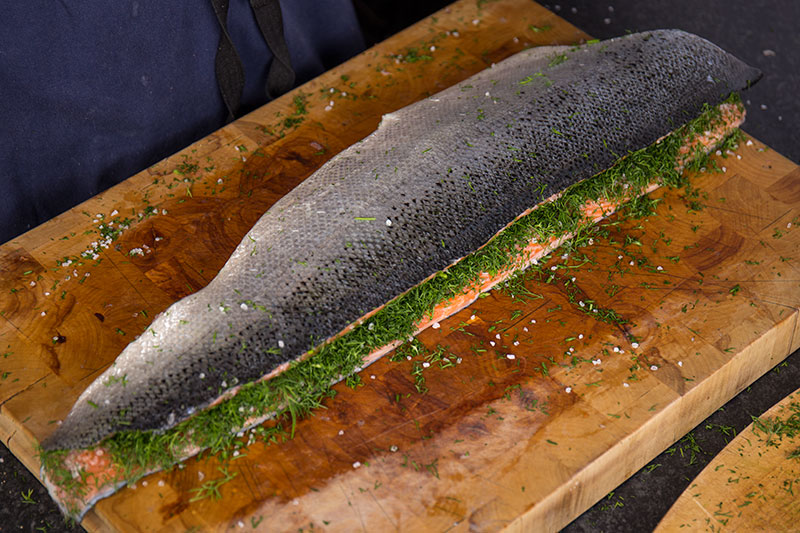 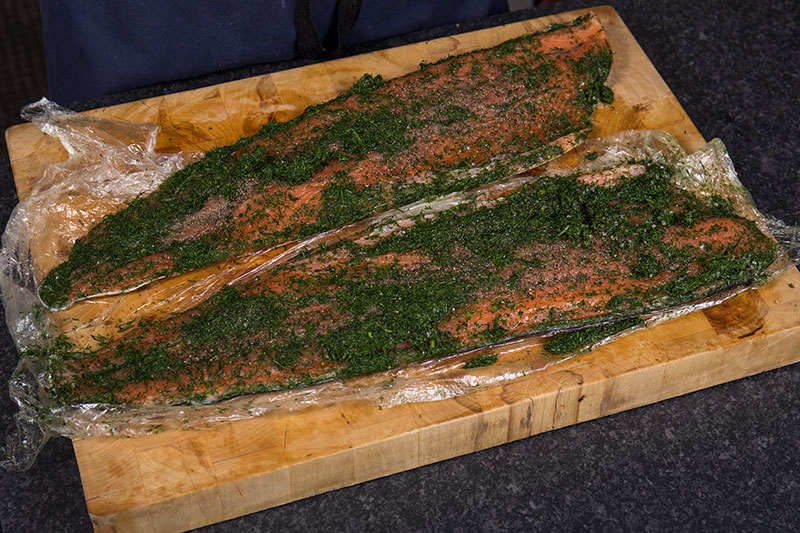 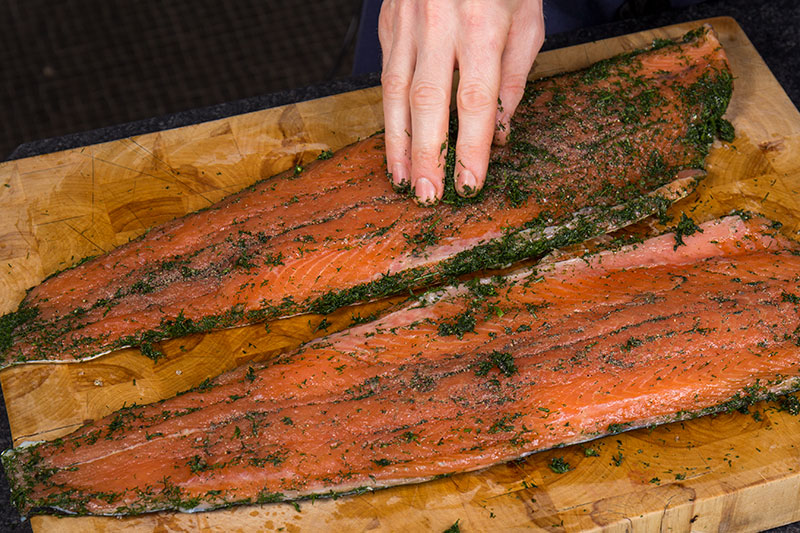 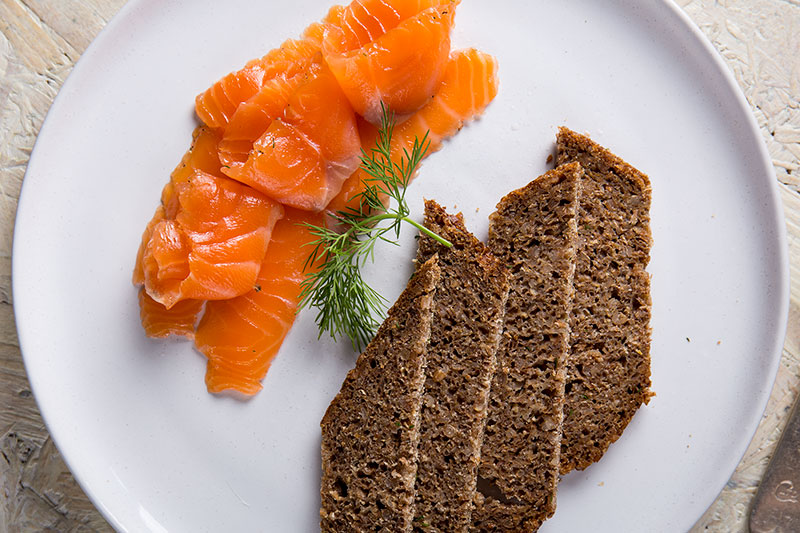 How to make gravadlax

This recipe is based on 1kg of salmon fillet, but you can scale it up or down depending on how much fish you have.

If you are unsure of the grade of your salmon, wrap it so that it’s airtight and freeze for 24 hours. Remove from the freezer and defrost fully before starting the process.

During the making you will need to create a sandwich of salmon fillets, so try to buy matching pieces of salmon, which are approximately the same shape and size. If you use two whole sides from a single fish, that is the easiest way. Or, if you are making a smaller amount, you could use two fillet portions that are the same size. However taking just a single whole side from a fish and cutting it in half won’t work very well.

Mix the salt, sugar and pepper together. Lay your salmon pieces out, skin side down and next to each other, so that they’re ready to fold on top of one another. Spread your salt mix across the flesh of both pieces of salmon, making sure the fish is completely covered. If you run out, just add a little more salt in the places that it’s required.

Now, lay out plenty of cling film to wrap this in. When using whole sides of salmon, the cling film isn’t big enough, so I use two long sections, placed alongside each other, overlapping by a couple of inches. Lay your salmon sandwich on top of this cling film and then roll it up fairly tightly. You don’t need to seal the ends perfectly, just make sure your sandwich is well held together.

Using a pair of scissors, make several small nicks in the cling film along the length of your package, on both sides, top and bottom to make ‘drain holes’. As it cures, liquid will escape from the fish and this needs to be able to drain away. Place the salmon in a dish and put it in the fridge.

Turn your salmon package over every 12 hours, also check that the juices that are escaping and cut some more drain holes if not. There should be quite a lot of fluid in the first 12-24 hours. The salmon will become looser in the cling film as the juices escape.

After 48 hours, remove from the fridge, unwrap and scrape off the salt and dill. You can quickly wash it as well under cold water and pat dry with kitchen towel, or just leave it as it is with a few bits of salt and dill here and there. The salmon should have become a slightly darker, richer colour after all that time.

To slice, get a very sharp knife and slice diagonally down and away from you, rather than straight down to create decent sized slices. I like to cut them quite thick.

To make the sauce, just mix all of the sauce ingredients together well. Serve with rye bread for a simple yet fabulously tasty meal.