It’s not even deepest winter, yet there’s a chill breeze whisking it’s way through our creaky, draughty old flat. Last night, the air outside was so crisp and clear that it felt like every noise I made was amplified and the background clattering of London was gently quietened for a change.

Our quaint Victorian home has wonky floors, parallelogram shaped window frames and a staircase with uneven height stairs which makes first time visitors stumble when they head up to the loo. The central heating, although noble in intent, does daily battle with the ingress of cold, damp air, a fight which brings to mind the vulgar, but nonetheless highly illustrative phrase ‘like pissing into the wind’. I sometimes feel like I need to wear gloves at my desk, or even a onesie, because despite the high levels of ridiculousness that they embody, they’re supposedly very good at keeping you warm, in the same way mittens are warmer than gloves. Anyway, at least our home has character, eh, that’s the important thing… 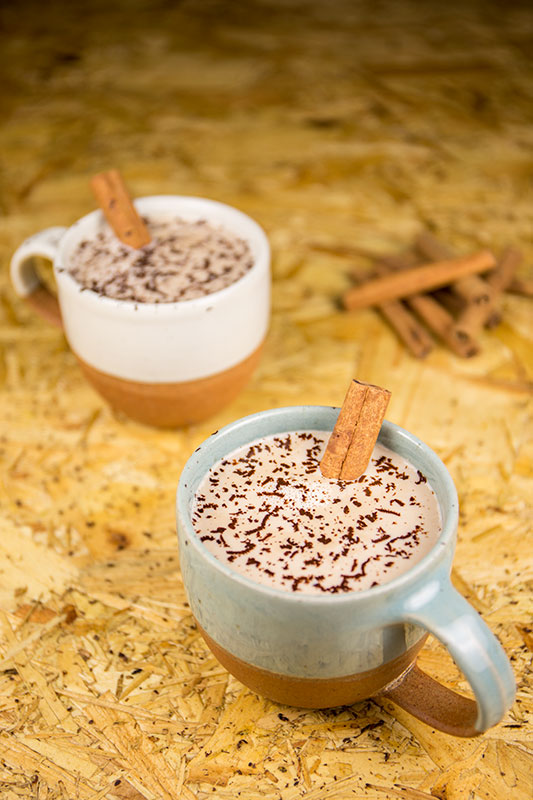 Back in the halcyon haze of the summer just past, I posted a recipe for a banana peanut butter smoothie which became our de rigueur drink of the summer. Now that the weather is changing I’m looking for something to keep me warm and it’s always nice to have a hot milk drink up your sleeve. Enter cinnamon, stage left. Although this drink is based around cinnamon, it’s actually a drink of various levels, to suit your dietary or gustatory requisites. At the first level, we infuse the calm, sweet flavour of a cinnamon stick with the hot milk, which produces a delicate and gentle drink that warms you through not only with heat but with flavour as well. My next stop on the journey is to play to your sweet tooth, if you have one, where I recommend a spoonful of date syrup which adds not only sweetness but an enticing richness to the colour. Lastly, to complete the drink with an indulgent flourish, I suggest grating some dark chocolate over the top, nudging this drink into a sumptuous, flavour packed mug to comfort you on the sofa. 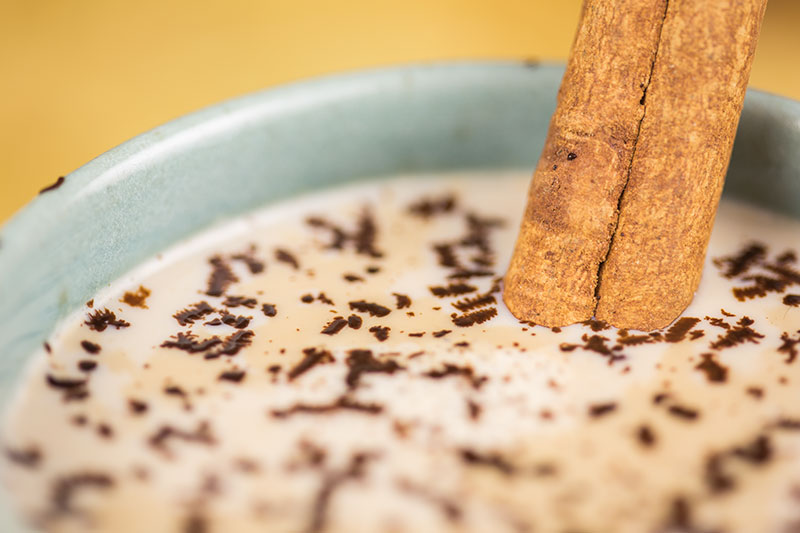 I’ve made this drink with all types of cinnamon, cheap, expensive and everything in between. The expensive cinnamon generally tastes better and given it’s the primary flavour here, it’s one of the few occasions that I would recommend splashing out for some higher quality cinnamon, if it’s available to you (or try online, I’ve used www.buywholefoodsonline.co.uk). I’ve tried making this drink with ground cinnamon, using various methods, but cinnamon isn’t soluble, so you always end up with a grainy insoluble layer. So best stick with cinnamon sticks which have the added benefit of being a natural stirrer to muddle your mug with.

There’s a big debate online about cinnamon and cassia, which are very, very similar things. They’re both types of cinnamon, one being ‘Cinnamomum Verum’ and the other being ‘Cinnamomum Cassia’. Cassia will often be labelled cinnamon and is by far the most prolific and cheapest, however isn’t regarded as the best one from both a health and taste perspective. The Verum type, otherwise known as Ceylon cinnamon is better for you and has a nicer taste, although you may need to hunt around to get it, my local stores don’t sell it.

The main visual difference is that cassia is a tough bark, whereas Ceylon cinnamon has delicate, wafer like layers. The price is also a good indicator, Ceylon cinnamon is often double the price of cassia cinnamon.

Serves 2
Takes 15 minutes
Uses a saucepan with a lid

Pour the milk into a saucepan which has a lid, roll the cinnamon sticks in your hands then add to the milk and place over a high heat on the cooker. Heat the milk, keeping an eye on it until it’s about to start simmering. Turn the heat off and put a lid on the saucepan. Leave for 10 minutes to infuse.

Stir in the 2 teaspoons of date syrup, stir well, then pour the milk into your mugs. Using a fine cheese grater, grate some dark chocolate on top and then drink!