Today I’m having a reflective look at my life before launching into the recipe of the day which is honey glazed celeriac. This is a true barnstormer of a recipe that passed my unfailing recipe test… can I eat the whole lot in one go. Without doubt, yes. It’s also an incredibly easy way to make this ugly root become the most popular dish on the table, just chuck it in the pan and leave it to cook down and caramelise into lovely sweet hunks of veg.

Digging About in my Past.

Whilst bumbling through the archives of my writing yesterday, I happened across an unpublished piece I wrote in the first week of 2016. It’s a quasi-rant surrounding the excesses of Christmas accompanied by a creative piece of photography, one of the few examples where I have composited two images to create the impossible, it’s an image that defies gravity. Not only that, it’s written in an elaborate style with lucid, fluent prose, I found myself stunned and amazed at the words in front of me, I couldn’t quite believe where they had come from.

I’ll publish the piece one year to the day after it was written, so keep an eye out in the first week of January, it’s called Mince Pies – Burn After Reading and dare I say, it’s a bloody good read. 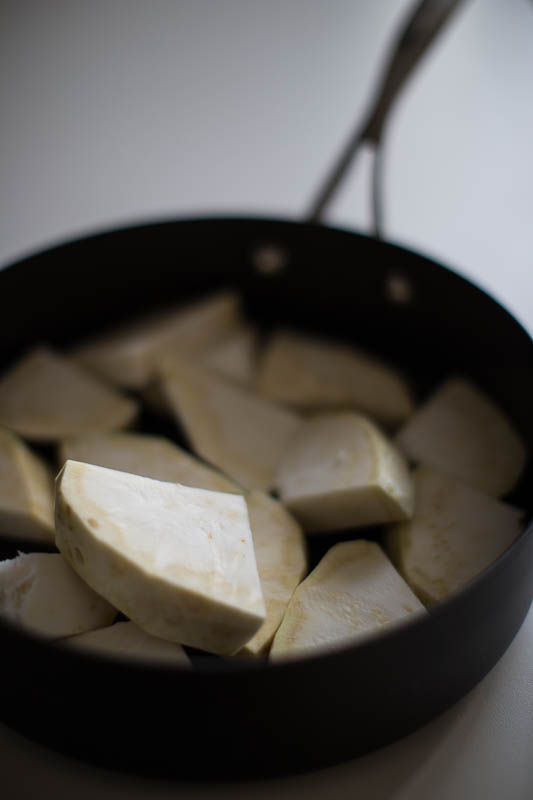 The discovery of these words whisked my world back to when, having just had a Christmas full of food, jigsaws, books and rest, I was full of energy, enthusiasm and vigour for the impending new year. A year which I hoped would hold all the secrets to success and happiness in life. Within mere weeks, my life came crashing down around me, not only the death of David Bowie (although that was a big moment for me), but my personal life turned upside down when I split up with my girlfriend of 6 years, resulting in selling my flat, moving around London and the beginning of a journey of introspection quite unlike anything else before it.

I don’t write about my personal life in depth on here. I skim over the surface. I drop hints and cast allusions without explicitly stating what’s going on under the surface. I surf the safe middle ground between thoughts and opinions without revealing who Gavin really is. After all, this is a food blog, not my personal diary. However, I’m not entirely sure that’s the best thing for me, I feel that baring every last trace of my soul for all to see would be a far more productive use of the words I tap into my computer. I’m simply scared that should I do that, you’d all laugh at me. 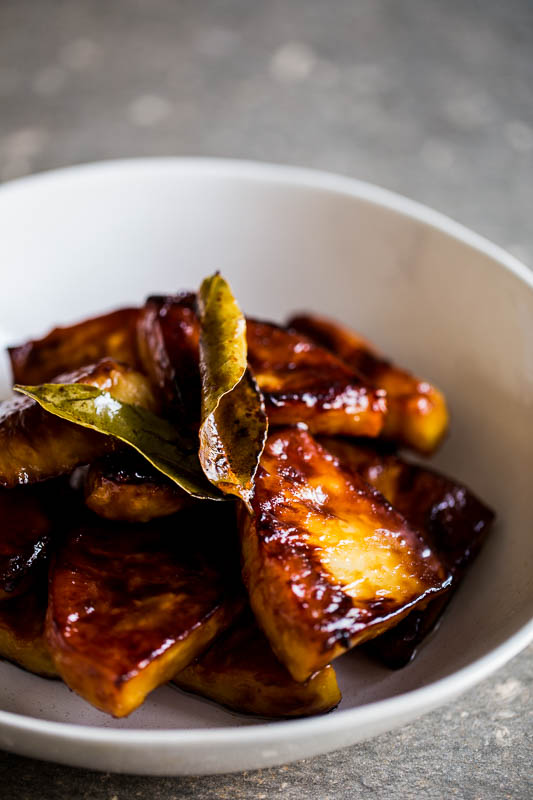 Going back to the piece I wrote at the beginning of the year, it has an enthusiasm and passion in the writing, an energy which I feel has dropped by the wayside as the year progressed. In my recent work for my Food Policy course, I feel they are attempting to strip the remaining vestiges of enthusiastic, colourful writing from my soul and replace it with the dispassionate voice of academia. My ebullient writing that I began to fall in love with 12 months ago is still inside me, I just need to go back and find it.

Perhaps I lost it on my travels. I began the year at my desk in a North West London, in a lower ground floor flat, before I moved to a top floor South West London desk position for 6 months with a view across the rooftops. I now reside on the first floor of a house in East London and it’s the first place that’s truly my own.

Despite moving out of home 15 years ago in a post-university hedonistic haze, this is the first place I’ve lived in through my own choice. The past has seen me make decisions about where to live with girlfriends, probably sometimes too heavily influenced by them. Other times I’ve been influenced by friends and included family in my decisions. After a mighty 39 years on the planet I’ve actually started carving my own story into the fabric of life, rather than leaning on other people’s stories. 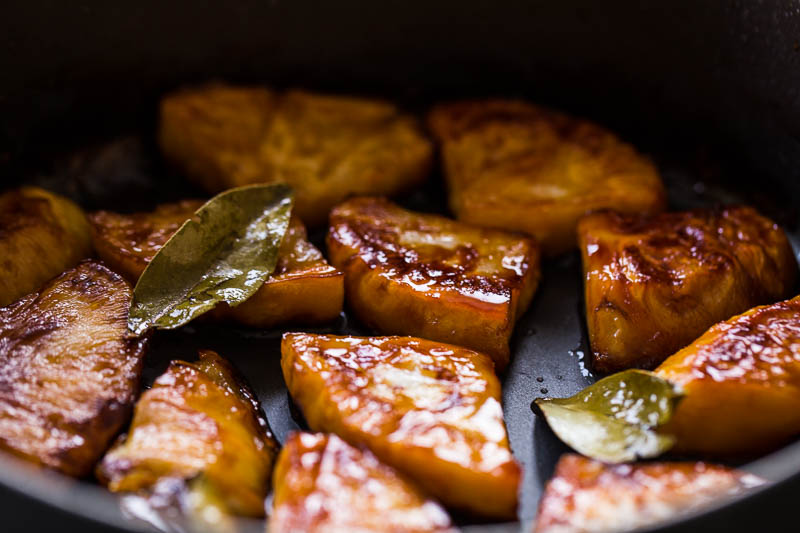 I’ve discovered that having my own story is very important, as long as I realise a few things. First, it’s just a story, it’s the past, it’s not the future. Secondly, stories can change, the plot can shift radically as I hit forks in the road. Lastly, and this is the hardest one, I need to make sure I’m the one who is writing the story, not somebody else. Don’t copy someone else’s story, or borrow sections of it, or let them write a bit of it, I need to create my own.

Maybe that’s what 2016 has been all about, finding my story again, making sure I’m the one who is in control. Going back to the start of the year, the reason I wrote the piece was to approach some major publishers to try and get work as a writer. It’s still something I dream of doing, because words are such fun to cajole into pleasing little lines of language. I love alliteration as well, it’s my favourite literary device, in case you hadn’t guessed.

2017 begins in a few days and rather than expecting salvation and success from it, I’ve started to realise it’s simply another collection of days that follows on from the ones we’re in now. I’m not putting all my hope into it, because as William Shakespeare said, ‘expectation is the root of all heartache’.

Instead, I’m just going to keep writing my story, like I am today. 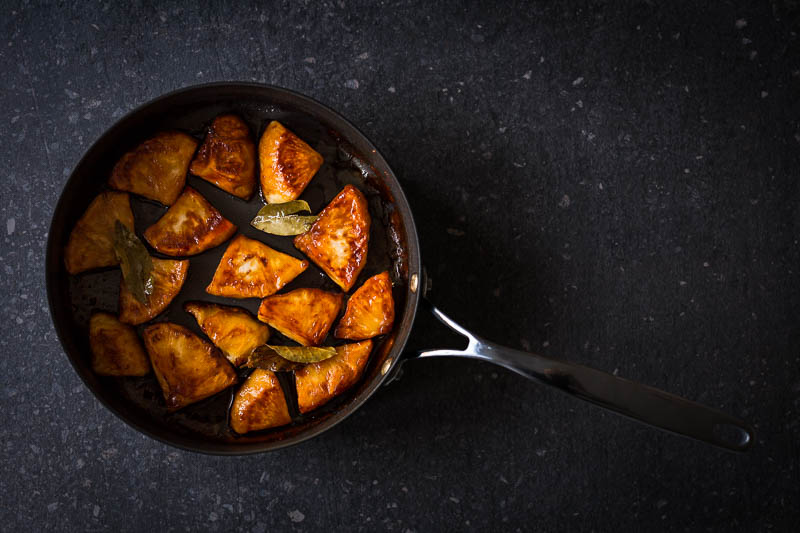 Oh. Food. I nearly forgot about that 🙂

I was inspired to make this dish by a recipe from Yotam Ottolenghi, in which he caramelises some sweet potatoes in a similar way. It reminds me of Jamie Oliver’s carrots from one of this books many years ago and also harks to Vichy Carrots, all of which are very simple ways to make some vegetables taste outstanding.

The concept is simple, put the raw vegetables in a pan with some sweeteners and simmer down, until you get a lovely soft cooked vegetable with sticky, sweet, glazed bottoms. It’s really easy and you can do it with anything, just give it a go. 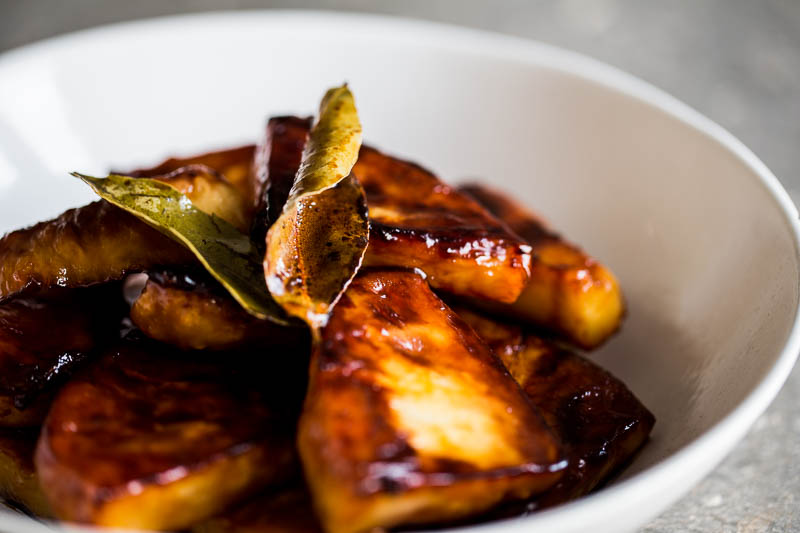 Cut the celeriac into quarters, then slice each quarter into 2.5cm thick slices. You want big, hearty chunks of vegetable.

Place them in a large saucepan or frying pan, ideally they all need to fit in a single layer. They will shrink a little bit, so it’s OK if they don’t quite fit.

Put the remaining ingredients in the pan and fill it with water so that the water covers the celeriac. Bring to a boil, then reduce to a fast simmer.

Cook for about 30 minutes, until the water has all evaporated and the celeriac is sizzling in the gooey honey glaze. Check the bottom of one of the pieces and once it’s got a brown glaze, turn them all over and cook for another 5 minutes until the other side has nice glaze to it.

Serve immediately, whilst nice and hot and dripping with honey.