Today’s recipe is a fuck-me-that’s-good (sorry mum) salted dark chocolate peanut butter sauce which could easily tempt you into eating the entire bowl with a spoon before it gets to the table. Glossy, silky dark chocolate mixed with peanut butter and a hint of salt to offset the sweetness makes for an unapologetically decadent dairy free sauce. Make as much as you desire, just don’t expect there to be any leftovers.

Everything I read about blogging seems to extol the virtues of finding a niche, how that’s the key to good blogging and finding success, because you can build an audience within that niche. Of course there’s a lot of truth in that, because if I only post recipes for spaghetti bolognese and peanut butter then I’m never going to stand out from the crowd. I always try to keep one eye on the use of healthy, progressive ingredients in my recipes, leaning towards putting a contemporary twist on things to make the dish slightly unique, normally in acknowledgment of the culinary zeitgeist. I always try to look where things are going, rather than where they been.

But occasionally I do something just because I know it’s going to taste awesome. Not because it’s unique, healthy or a twist on anything, but simply because some ideas and flavours which come into my head are clearly so special that I just HAVE to put them on my blog and to hell with Google being full of them already. These are often ideas that come to me in the middle of the night, or whilst driving to a meeting, based on experiences I’ve had, foods I’ve eaten and flavours that I’ve experienced, which I’ve been so awestruck by, I just need to replicate them for you, my dear, singular reader. 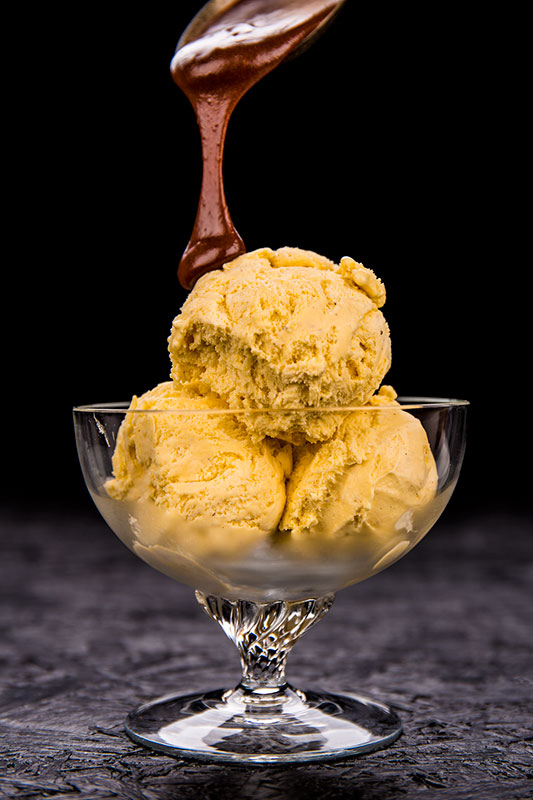 Ever since I first became conscious of the idea of sweet tasting ingredients mixed with salty ones several years ago on Holiday in India (see my post on Sweety Salty Fresh Lime Soda for the full background), I’ve been a huge proponent of this juxtaposed flavour combination. It really does taste damn good, you only need to witness the recent explosion of salted caramel and similar ideas to see how zeitgeisty this popular concept is.

I have a friend (shock!) who for the past few years would regularly bring stocks of Justin’s Dark Chocolate Peanut Butter Cups back from the USA. They are simply one of the most incredible flavour experiences, sumptuous, rich, velvety, dark chocolatey, salty, peanutty little cups of pure pleasure and basically everything you could want from a bite size chocolate snack. It’s lucky that the supply was strictly rationed, because ‘restraint’ is not a word which these delicacies encourage the use of. 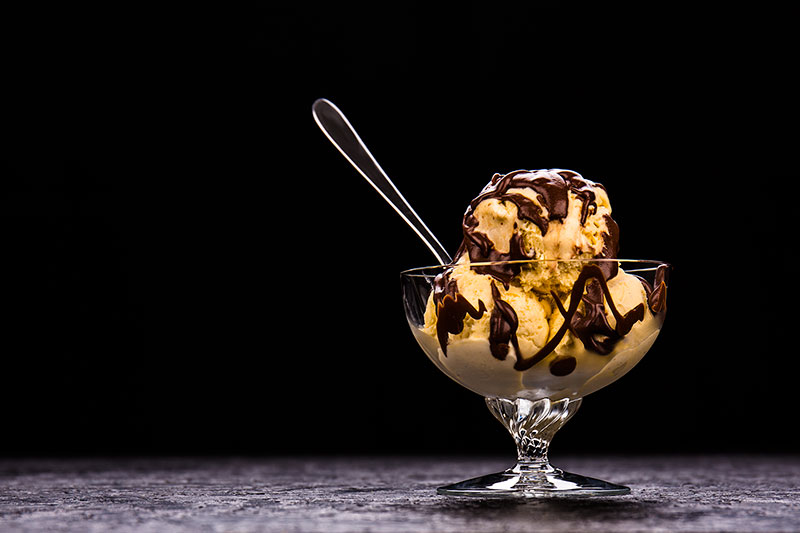 Since becoming slightly addicted to this flavour I wanted to create the peanut butter cup feeling, without having to rely on a return trip to LA to fulfil the desire. I also prefer to keep things simple, so decided that rather than working to create a full replication of the little cups, I would make a sauce that had all those amazing flavours but which could be applied wherever and however I wanted, either slathered across whatever my dessert of choice might be that week or eaten with a spoon if I felt the need to wind up the guilt factor to even higher levels. 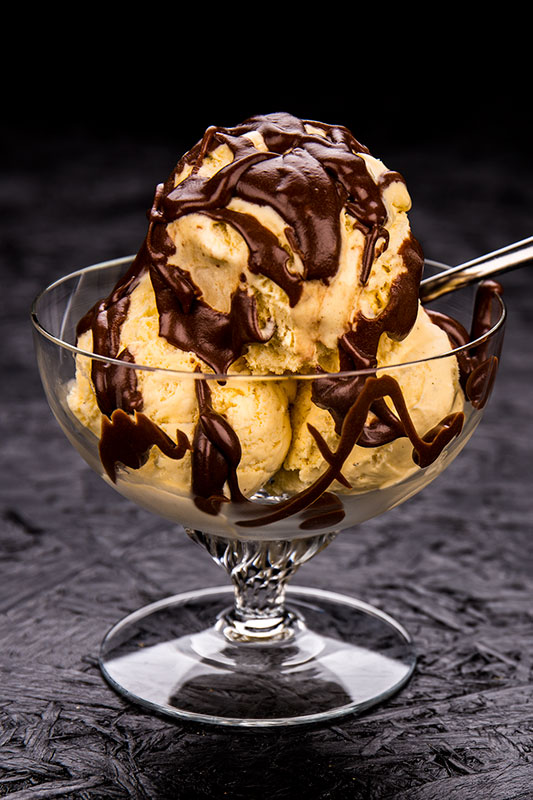 Very recently I published a recipe for Spelt Pancakes and I thought it could be the perfect recipe to demonstrate the sheer awesomeness of this sauce, pancakes topped with a banana then smothered in the sauce. But I was wrong. This sauce is infinitely too decadent and rich for a mere banana. It made the banana seem like a shallow, savoury base, rather than the sweet, textural addition I was hoping for. This sauce is in the big league. It’s richness and flavour will trample over most other things so works amazingly well with either very simple bases, such as vanilla ice cream, or with equally rich and sweet ones, such as a chocolate cake, which would be amazing served with this sauce and ice cream on the side. Or chocolate brownies topped with this sauce. Mmmmm.

Which takes me back to my first point. Describing a decadent, thick, dark chocolate sauce as healthy would be a step too far, however I have eschewed refined sugar, using agave syrup most sparingly for sweetening the sauce, just enough to balance out the bitterness of the chocolate. I also felt almond milk would be a good, dairy free addition for providing the fluidity, whilst adding it’s own nutty sweetness to the sauce at the same time. Which makes it a no added sugar, no refined sugar, dairy free sauce which has worked beautifully, so incredibly tasty that without doubt it features in my hall of fame of recipes I’ve created for you.

I hope you enjoy it just as much as I have, and that you manage to leave some for your friends or family, unlike me. 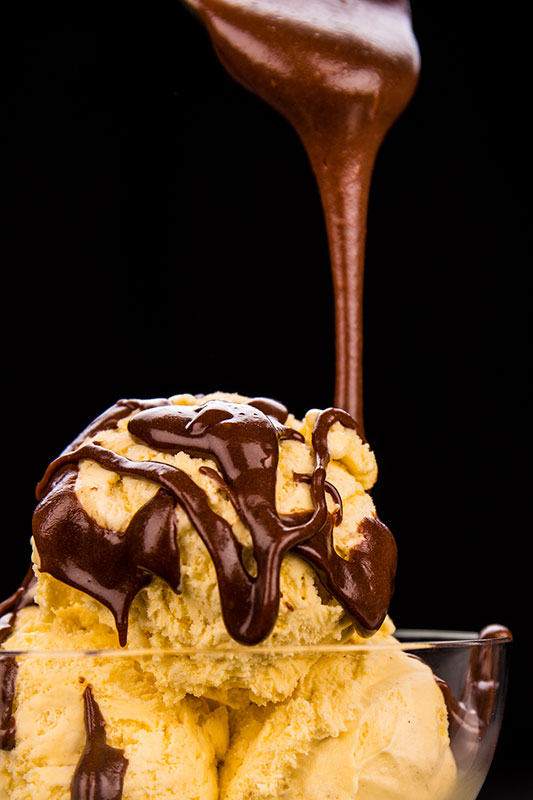 Heat some water in a saucepan and place a glass bowl on the top of the pan, making sure the bottom of the bowl doesn’t touch the top of the water. This is known as a ‘bain marie’. Bring the water to a simmer, then turn the heat to low and add the chocolate to the bowl. Stir it occasionally to make sure it all melts, but don’t leave it unattended.

As soon as it’s just melted, add the peanut butter, syrup and salt, then mix it all together until combined. Turn off the heat, add a few splashes of the almond milk and mix well. When combined, add some more. Repeat, adding small amounts of the almond milk at a time until it’s all combined and you have a thick, glossy sauce.

You can serve immediately, or you can leave it to cool, at which point it will thicken. It will also store well if left covered in the fridge, you can always reheat using a bain marie before serving.

It’s important not to expose chocolate to too much heat, as it can spoil or split. If you find your chocolate sauce ends up with an oily layer separating out, or if it goes really matt and white, rather than rich and glossy, it’s because it’s had too much heat. That’s why you need to stir and watch the chocolate, so that it doesn’t get any hotter than it needs to, then you can add the other ingredients as soon as it’s melted.