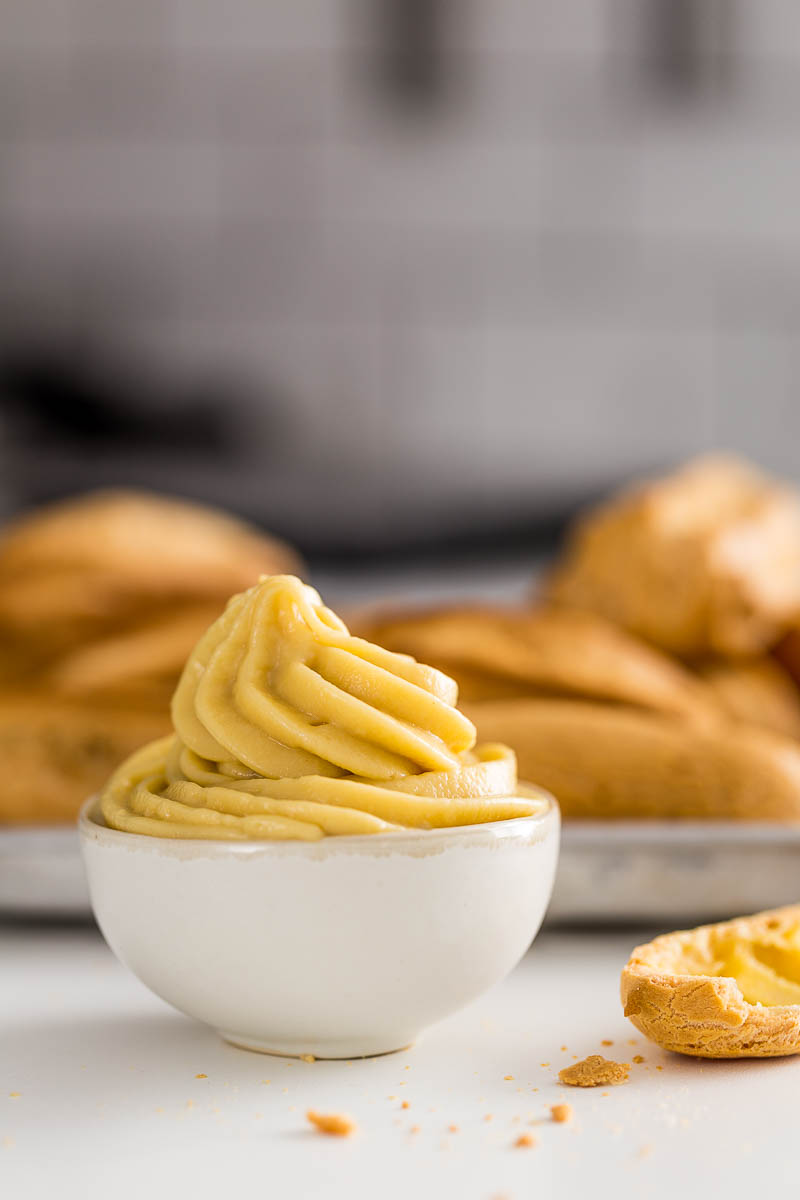 I’m tackling a patisserie basic today, luscious crème pâtissière, that thick, sweet, yellow cream found in the most amazing patisserie treats and tarts. This version here has undergone a lactose free tweak, making a dairy free pastry cream that everyone can enjoy. 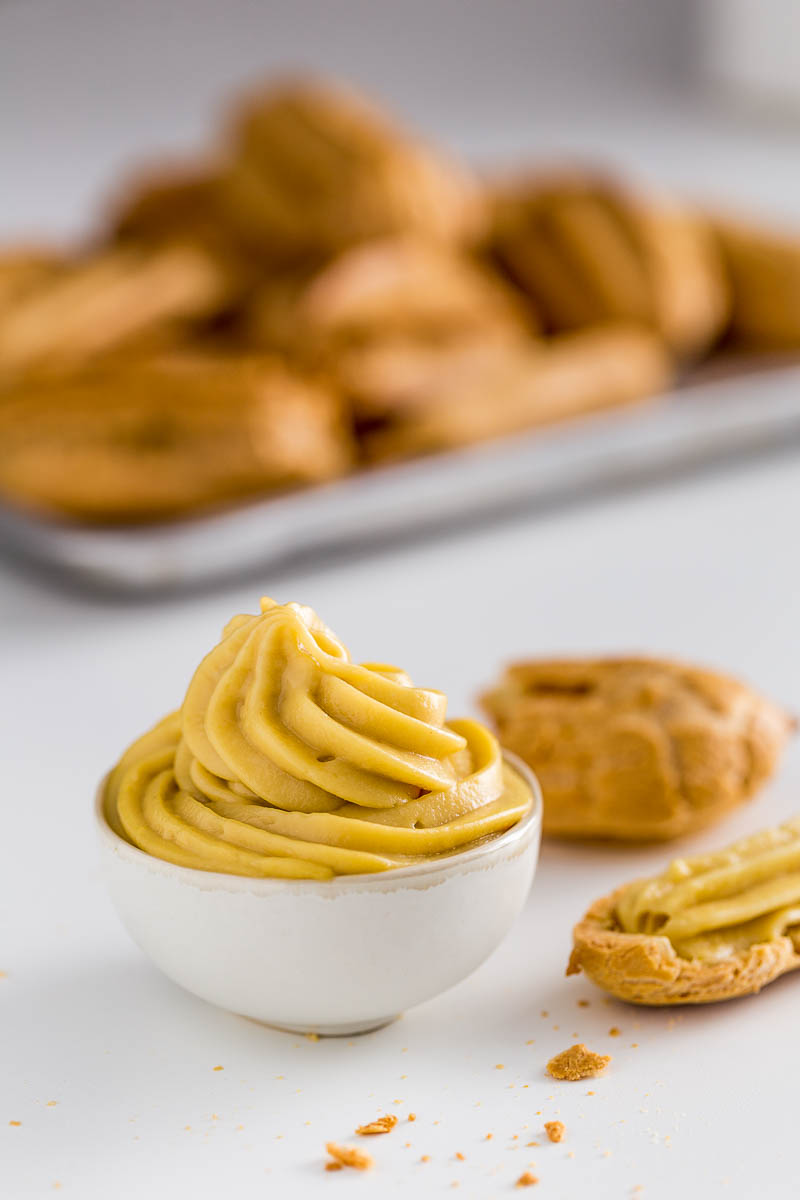 Don’t worry, I’ve not adopted a peculiar language or speaking in tongues. It’s how I first heard crème pâtissière referred to during a croissant making workshop. The instructor was demonstrating other uses for the lovely, flaky, layered, enriched dough, working through pain au chocolat, before mentioning we could make pain au raisin.

He suddenly shouted across the kitchen to his assistant “Can I use some of your krem pat?”. She said “sure! It’s in the walk-in”. As I blankly wondered what the hell this krem pat was, he went on to explain crème pâtissière, or pastry cream as it’s also known.

I love these little nicknames that ingredients are given. Like calling smoked paprika ‘smokey pap’, crème pâtissière becomes ‘krem pat’, knocking off 3 syllables and saving much needed time in a busy kitchen.

It reminds me of the way that Londoners will seize any opportunity to expound their intricate knowledge of the tube map, including their little secrets, like when you’re travelling southbound on the Northern line and want to change at Euston for the Victoria line, it’s far, far quicker to change from the Bank branch than the Charring Cross branch. See, I’ve even done it there. This is incredibly vital information to save a merely a couple of minutes on that journey.

Although Time (“He’s waiting in the wings, He speaks of senseless things, His script is you and me boys” – David Bowie) is the supposed reason for these tips, tricks and foreshortenings, I don’t believe it’s really the case.

The moment you demonstrate these pieces of knowledge, you’re saying “I know my shit”. By saying krem pat, smokey pap, meez etc, you’re telling people you actually know what you’re talking about, because you’re fluent in a secret language, a bit like Polari, to mark out your territory and your people.

It’s more than simply knowledge, it’s identity. Knowing the tube system beyond the map says lots of things such as “I travel a lot, I’ve visited a lot of places in London, I’m cosmopolitan, I’m learned, I’m switched on and efficient”. It’s not just knowledge, it’s a message of implied authority on a situation, it’s demonstrating your experience and your position.

However, there’s nothing wrong with that. After all, who doesn’t want to feel like they belong with a group of people with shared common ground, a united interest? I’ve spent most of my life looking for ‘my’ people and when I feel an affinity for someone, something, or some place, I’m going to grab it with both hands.

Back to Pastry Cream.

As a lactose intolerant person I’m always looking for ways to make rich, sweet sauces without milk or cream. Yoghurt, butter and cheese have less lactose due to their processing, so are far less likely to cause me stomach grief unless consumed in massive quantities. It’s the sloppy, sweet, sticky fillings that often require cream or milk which therefore need careful attention and de-lactification (yes, I just made that word up).

My kitchen has been a patisserie adventure this week, ploughing through spelt baking recipes with abandon. I’ve always felt a love for baking and finer desserts, so why not indulge that, the fruits of which will be coming up soon on this blog.

Today is one of the building blocks for many other recipes. A recipe for sticky sweet dairy free pastry cream to fill your desserts, eclairs, doughnuts or mouth with and uses no dairy whatsoever.

Mess around with this, add some cocoa powder with the flour, or some espresso with the milk, or cinnamon, or all of them! Just don’t make the same mistake I did, which is to eat half of it with a spoon the moment it comes off the heat, at least try to save some for your guests.

Put the milk and vanilla seeds in a saucepan and bring to a simmer, then turn off the heat. 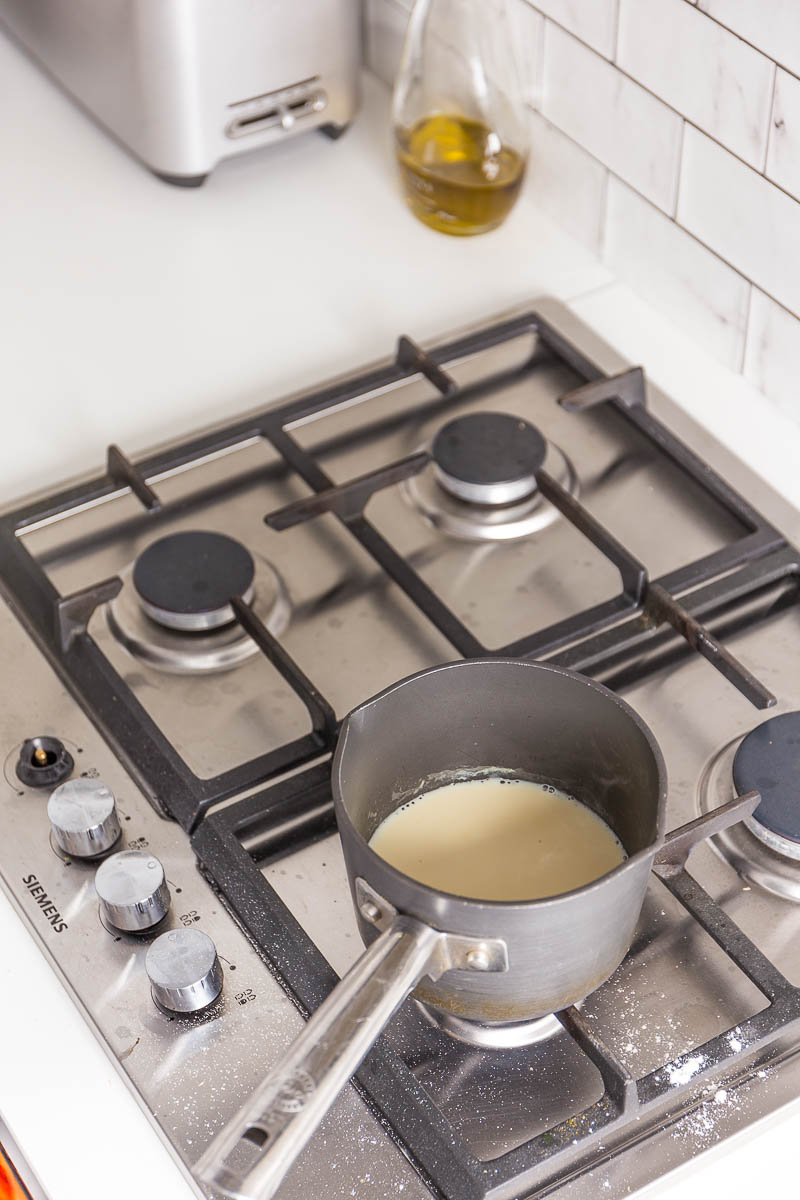 Meanwhile, beat the egg yolks and sugar to a paste in a heavy bowl, then whisk in the flours. 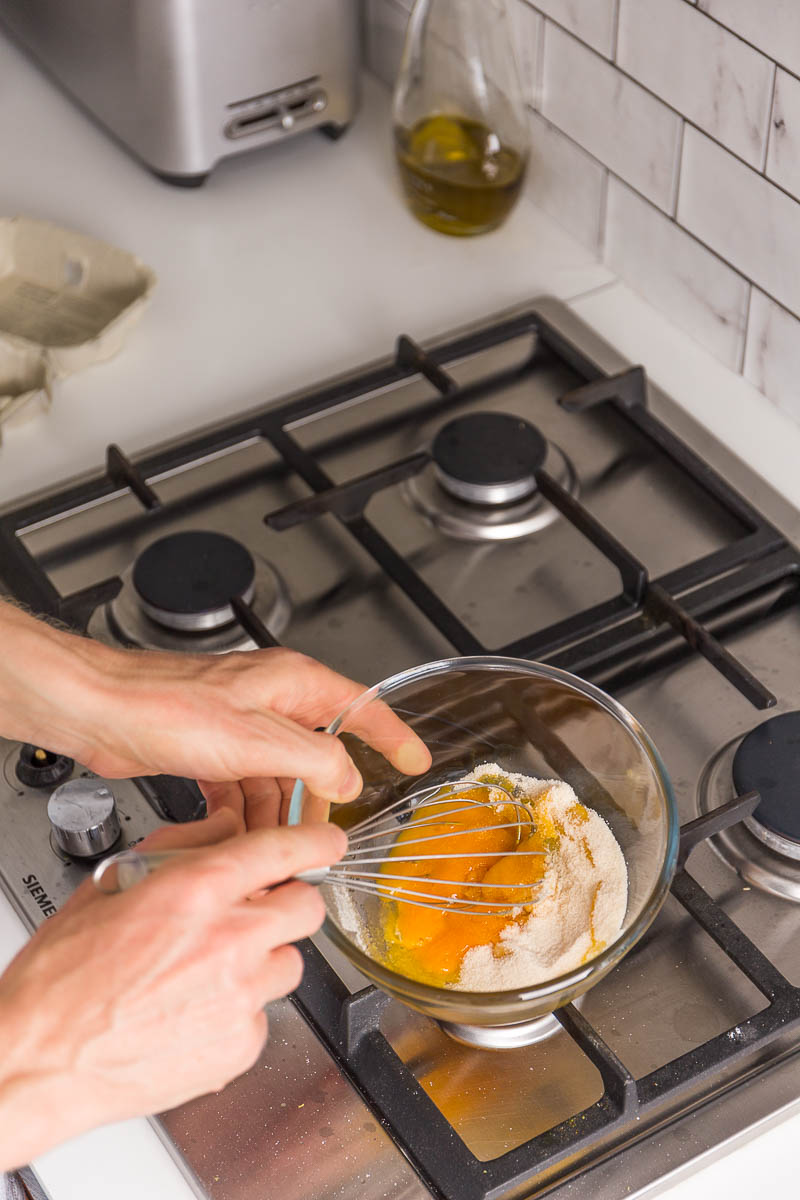 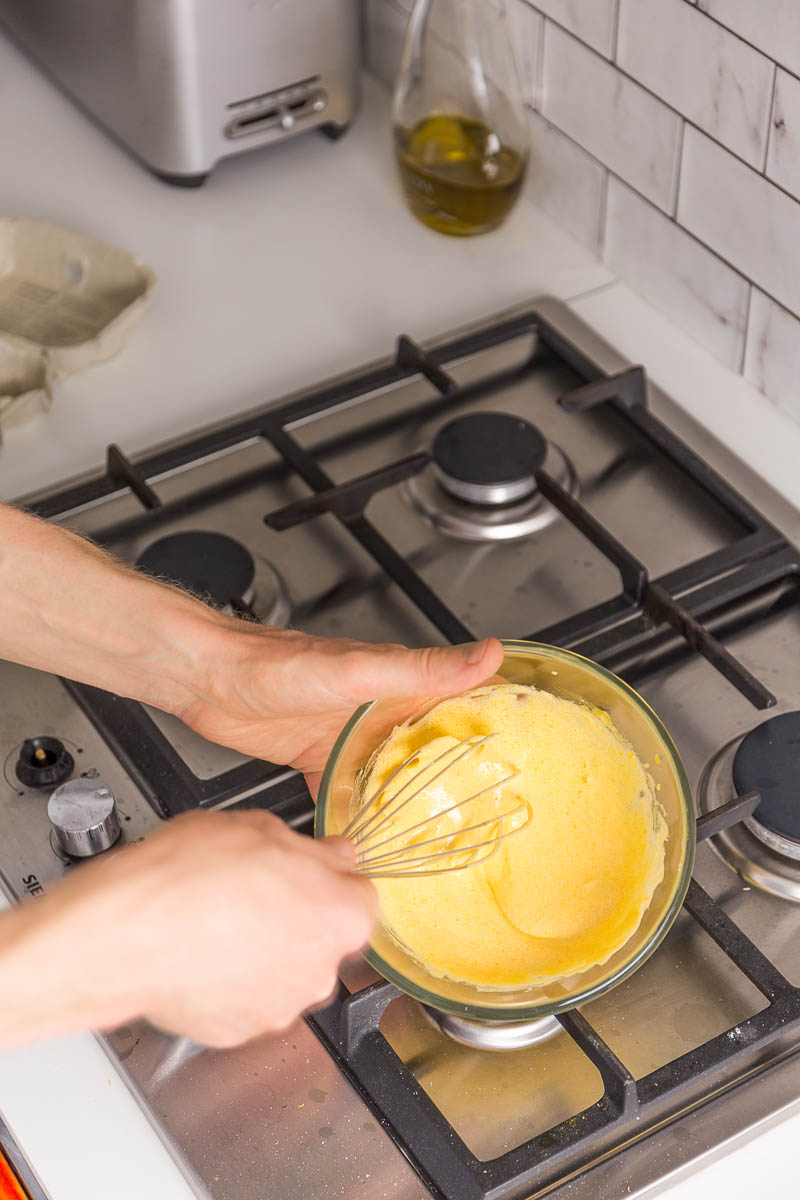 Gradually pour the milk into the egg mix, whisking continuously. Once fully incorporated into a smooth liquid, pour it back into the pan and put it back on a medium heat. Keep whisking, and as it comes back to a simmer it will thicken. When it reaches the consistency of custard, remove from the heat and cover the surface with cling film to cool.

This can be flavoured in and different ways by adding coffee, cocoa powder or other flavours at the start of the recipe. 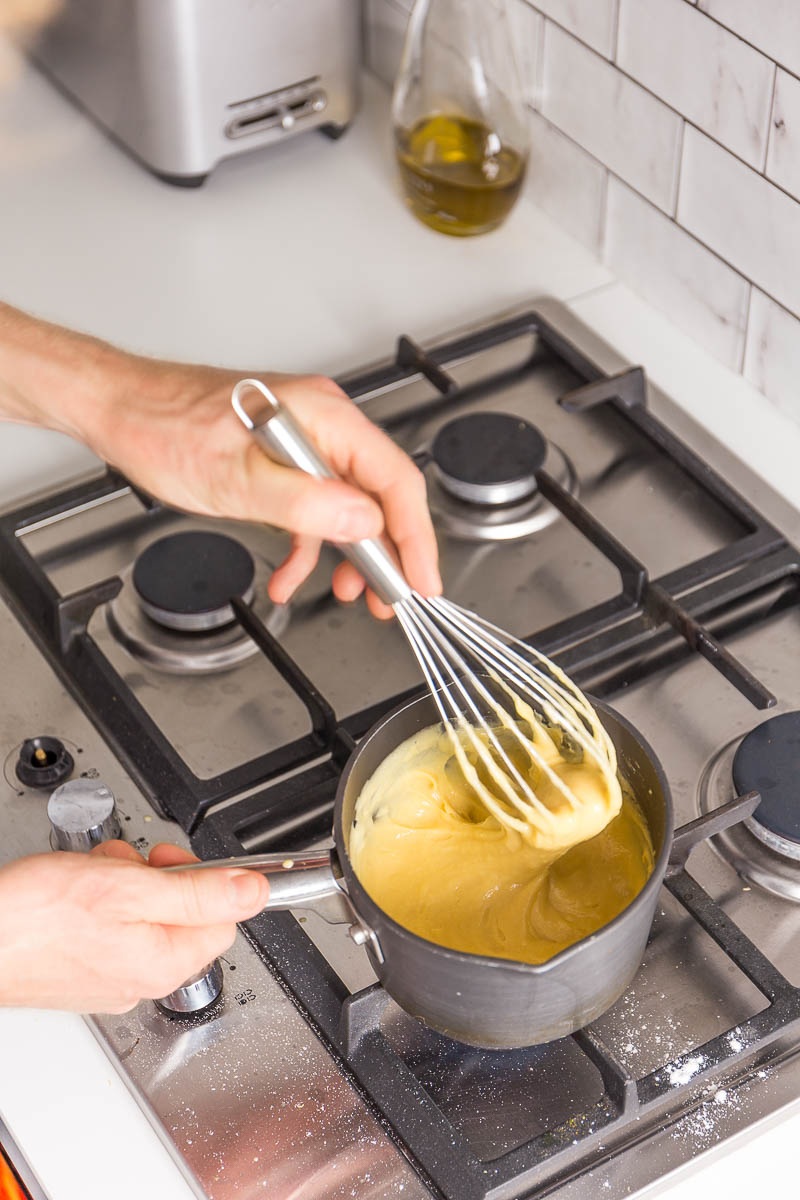