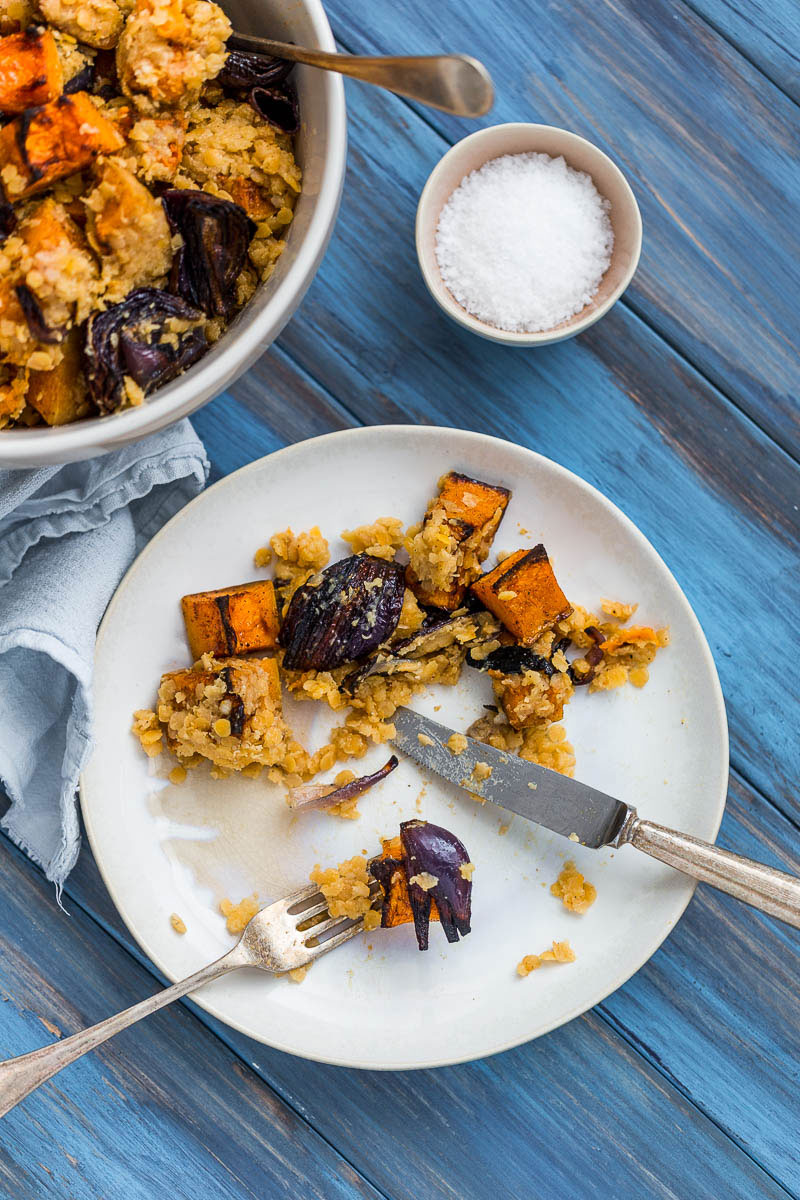 The divine pairing of butternut squash and cinnamon sit so beautifully together, it would be easy to assume that God himself had blessed us with their co-operation. A tray of simple cinnamon roasted squash, mixed up with a mash of garlicky lentils, is incredibly simple and simply incredible. The discovery of this pairing hallowed a eureka moment for me, they sit so perfectly that this recipe needs no more than a hungry mouth and a willing fork to accompany it. 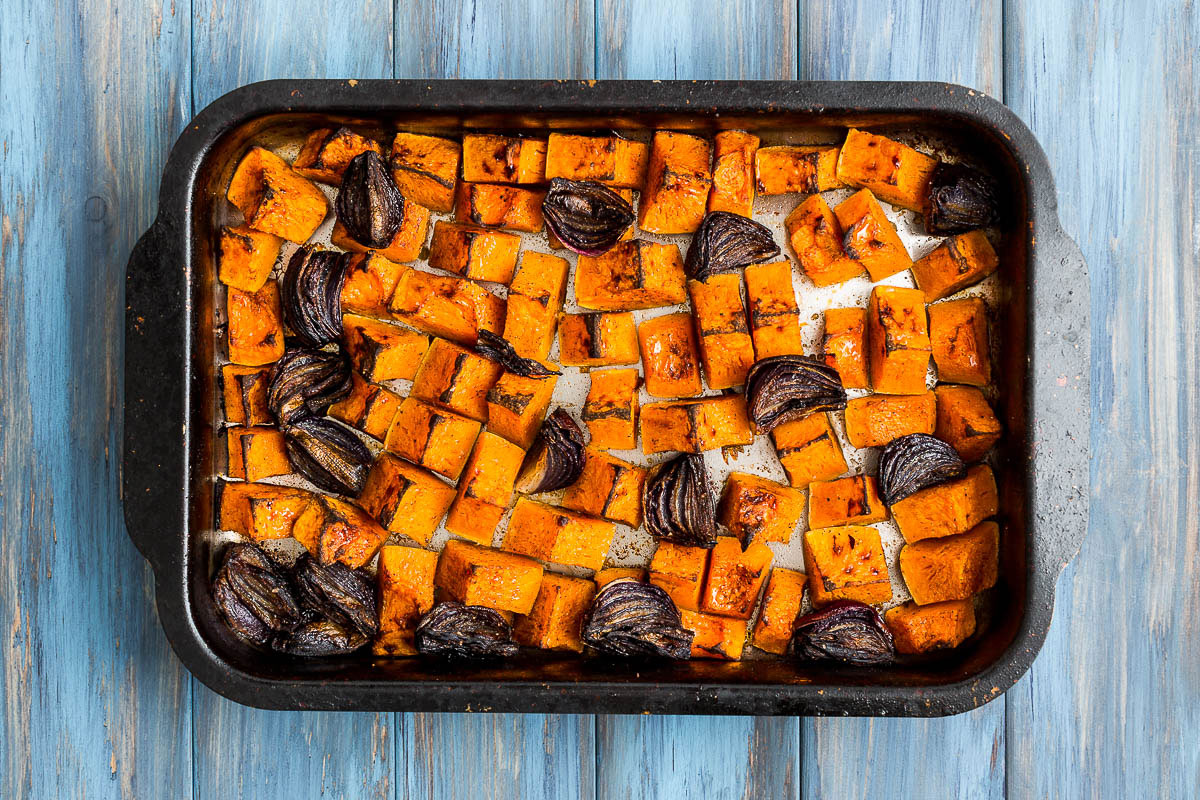 There are pairings in the world which fit together so perfectly, it were as if God or some other mystical being set them as a challenge for us in life, to see if we could discover these secret little puzzles. Like the easter eggs hidden by the developers in computer games, the little puzzles, rewards, cheats or shortcuts, buried within the fabric of the game for only the most observant or adventurous gamers to find. In the same way that Ant and Dec, salt and caramel or black and white simply work, some things are born to co-exist, as long as we do the work to find them.

Once realised, the unquestionable divinity of these pairings is universally accepted and they become rote, perhaps even a cliche, but a loveable one nonetheless. There’s little wrong with indulging in a cliched meal now and again, I’ll freely admit to having enjoyed numerous prawn cocktails followed by steak, finished off with black forest gateaux (one of the few things I remember from GCSE German is it’s German translation to Schwarzwälder Kirschtorte), back in the eighties. That meal epitomises the cliche of 80’s dining, but I loved it, especially the prawn cocktail. There’s little wrong with indulging in a cliche, unless you’re desperate to be cool, hip and different, in which case it’s anathema. But don’t worry, regardless of what you do, you’re different. Just like everybody else. 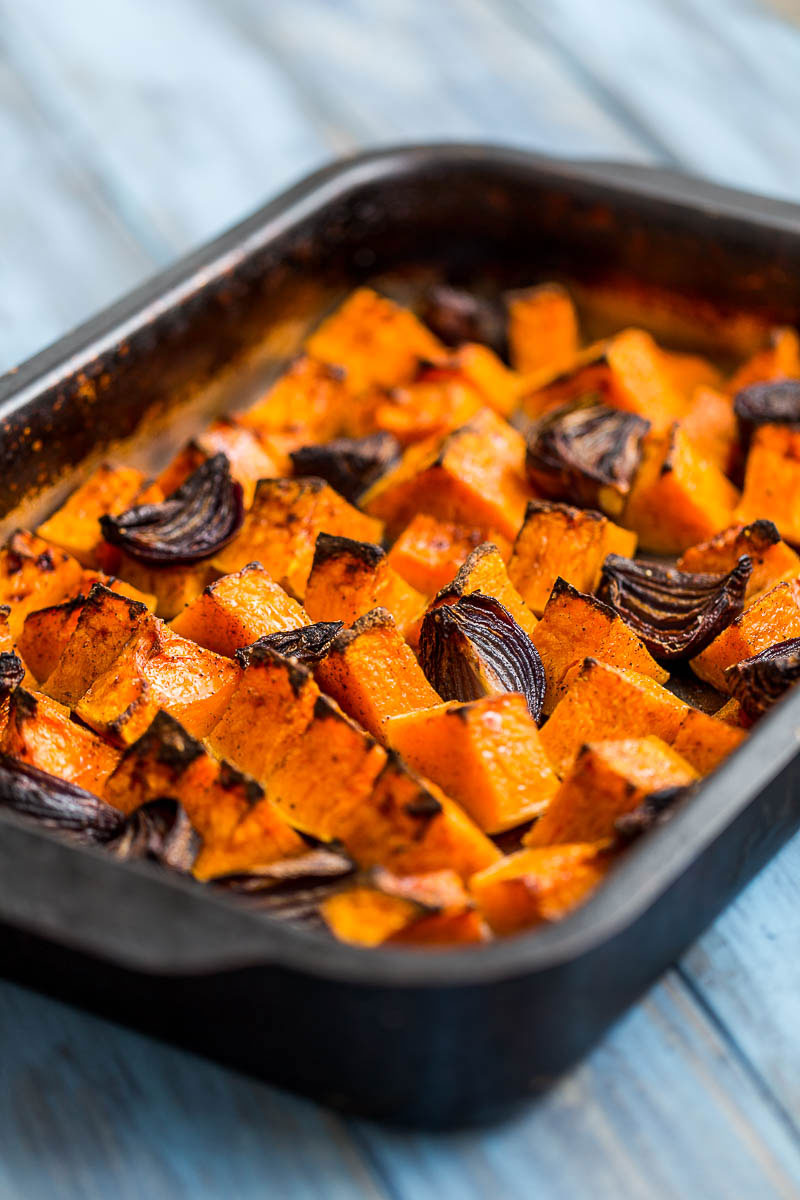 Meanwhile, the culinary love of my life, Mr Ottolenghi, bestowed upon us a recipe for a cinnamon roasted squash dip, which unveiled the divinity of butternut squash, roasted whilst basking in the warm glow of ground cinnamon. Here is a pair of flavours which together, became more endearing than Tinky-Winky, Laa Laa and the rest of the gang. Sweet, soft, warm and nurturing, more soothing than kids TV on a comedown, these flavours enmeshed with each other and left me feeling like I’d managed to level-up in life. I’d just found a cheat, a shortcut to gustatory joy.

This revelation happened a couple of years ago, but has been lingering around in my consciousness ever since. I was thinking recently about the relevance of simplification when creating a recipe, because there is no need to complicate things. If I’m considering adding another ingredient, I must thoroughly question it’s necessity. The shortest route to a simple recipe is a foundation consisting of an unbreakable pairing, like cinnamon roasted squash. 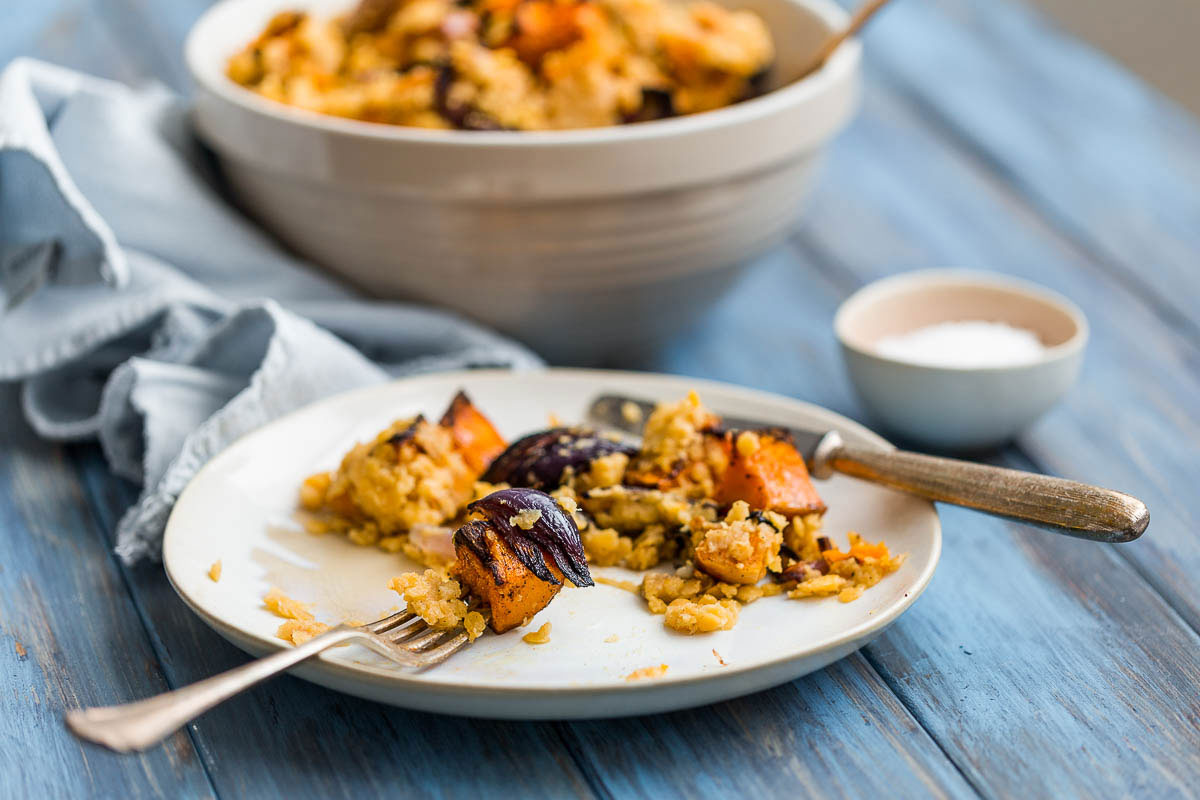 When pondering my lunches this week, this inimitable pairing came bounding into my field of view. I had been considering how to implement more pulses and grains into my diet, so I saw an opportunity for a ridiculously easy bowl of hearty food. I felt the challenge was to keep it as simple as possible, to add as few ingredients as possible to the cinnamon roasted squash, to preserve the virtuosity of it’s flavour.

Hence sweet, roasted hunks of butternut squash sprinkled with a mere dusting of cinnamon, simply tossed with lentils, garlic and olive oil. It’s simplicity almost makes it appear wanting, but trust me, it has every single last piece of flavour that it needs. A year or two ago, I would have stooped to cover it in herb yoghurt, sprinkle it with za’atar, or smother it in nuts, apricots and sumac. But no more, this needs none of that sullying, because it’s simply perfect as it is here.

Because it’s simplicity is also it’s pleasure. There is no need to peel the butternut squash, a task which sits alongside plucking thyme and visiting IKEA in terms of insanity inducing activities. Simply mixed up with some red onions, cinnamon and olive oil, then roasted and tossed into some garlicky lentils, the dish is complete. Once ready, you are beholden with a dish which can be consumed by the mountainous forkful, gorging, straight from the bowl. It’s sweet wholesomeness is unparalleled, one of the most comforting and enjoyable dishes I’ve created for a long time. I’ve been eating it for lunch every day with a light tomato and bean salad on the side, it simply tastes heavenly.

Just like Ant and Dec, this cinnamon roasted squash is a keeper, destined to stick around for a long time. So don’t resist, time to get it on your shopping list!

Serves 4-6 as a side
Takes 1 hour 10 minutes
1 large baking tray (or two small), a saucepan and a large bowl

Cut the squash into wedges about 1″ wide, leaving the skin on. Place in a large baking tray (you may need to use two) with the quartered red onions. Dust the cinnamon evenly over the vegetables, then pour over 2 tablespoons of olive oil, the salt and a few grinds of pepper. Gently toss them all together so they are evenly coated, then arrange the squash so that all the pieces are skin side down.

Place in the oven and cook for 50 minutes.

Put the lentils in a saucepan with cold water, bring to the boil and simmer for 6 minutes. Check they are cooked by tasting one, to see if it’s soft to bite, if not, cook a little longer.

In a separate bowl, large enough for all the squash, put the remaining 2 tablespoons of olive oil and minced garlic. When the lentils are cooked, drain them and toss in with the olive oil and garlic.

When the squash and onion is cooked, toss with the lentil mixture and serve.