Today I’m looking at how cooks and chefs around the world have lied to us about how to cook onions, misusing terms like sauté, caramelise, sweat and fry along with frankly ridiculous suggestions of cooking times. So if you really want to know your onions, read on, and I will expose the real truth about onions.

It’s time for a News of the World style exposé of the food world. Time to blow open the doors of convention and open your eyes to the delusion and deception that’s all around us in the circus ring of recipes. There’s a common portrayal out there in the culinary world, a veil of misconception that’s flown across people’s faces time and time again, a published mistruth, a conspiracy to mislead and delude the common or garden home cook. For many years there has been a delusion that’s paraded around, invoking confusion amongst those who sit under it’s tyranny, all in the false name of creating friendly and accessible recipes for us, Mr and Mrs J. Public.

The problem exists with our dear friend, the onion. The ubiquitous ringmaster of savoury cooking, always there, ever present as part of the base required to get a dish going, to give the foundation of flavour to build upon. They provide a soft, sweet basis and are a cornerstone of any cook’s store cupboard. Such a fundamental ingredient must surely be widely understood by all who encounter it, non? Non. Everyone lies about them and everywhere you turn you’ll find this deceit. It’s time to tell you the truth about onions.

You see, onions take a long time to cook. Really, they do. Not that you would realise this from reading most recipes which generally fool the reader into a false sense of security, commonly suggesting steps like softening the onions for 4-5 minutes or thereabouts. But that’s a lie, onions take much longer than that to cook properly, they need time and patience to maximise their flavour. Rushing through their cooking is only apt when deep frying or stir frying, when a big hit of heat is going to do what you want. When the onion is working as a flavour base, they need to be treated with patience and servitude, not that anyone tells you that.

It took many years of home cooking to discover this. What I’m talking about is sweet, sweet onion loving. I’m talking about teasing the soft, sweet flavour out of these vegetables to make the best possible foundation of flavour to fulfil your recipes procreation. Furthermore, there’s a tangled web of confusion surrounding the terminology used to cook the poor little things, with countless recipes suggesting steps such as “sauté the onions over a low heat until translucent”. However when I go to my enormous compendium of cookery terms, Larousse Gastronomique (which is to a cook what a dictionary is to writer), it defines ‘sauté’ as “to cook in fat until browned”. That leaves a cavern of misunderstanding around what Sauté is, because soft, translucent onions should never reach the ‘browned’ section of the onion colour scale.

I will admit that I was under the impression that sauté was a gentle cooking, however historically that is incorrect and sautéing is using higher heat and keeping the food moving around the pan to prevent burning. Now that I understand what sauté really means, I can begin to understand what levels of confusion abound amongst professionally published recipe writers. So it’s no wonder that unpaid, non-professionals like myself have trouble working out what’s going on. 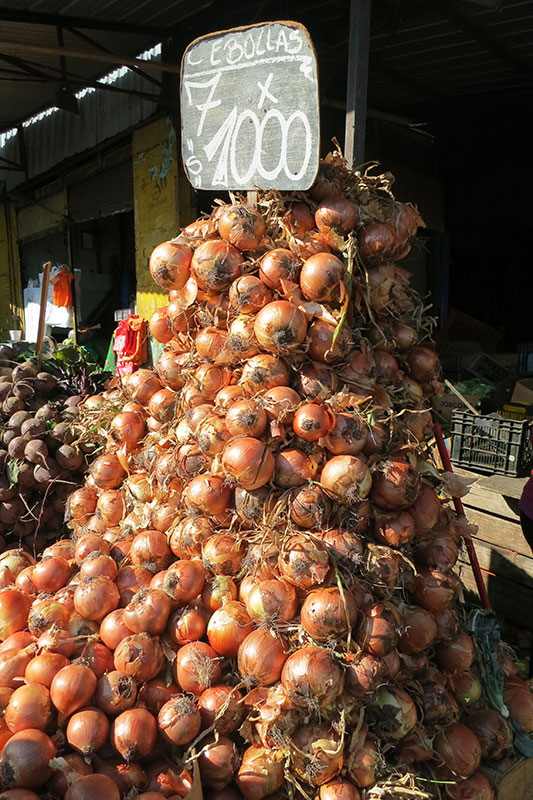 The Clock is Ticking.

The big problem is the mis-representation of onion cooking times. You see, onions require a long, slow cook to get that delicate sweetness to develop fully. So if you read a recipe that’s saying to cook over a low heat for a few minutes, it’s not giving you enough time to cook your onions properly. They need 20 minutes or even 30 minutes over a very low heat, until they become utterly soft, creamy, silken strands of intermingling Allium. The problem is that nobody wants to spend half a bloomin’ hour just cooking the onions when Eastenders is on in 23 minutes, so dinner needs to be on the table in 22.

By misleading the world over the actual length of time required to develop the flavour of onions, a recipe writer can cut a large swathe of cook time off their recipe. This could take it from a 45 minute to a 30 minute make, and such brevity in the time required to make a recipe endears the world to it all the more.

The most extreme example of this which I’ve encountered comes from a recipe book which I utterly adore. I’m not going to name it, because it would be an unfair indictment against a book which on all other counts is truly adorable. In the case of this particular recipe, there’s a requirement for caramelised onions. The recipe suggests softening the sliced onions for 10 minutes, then turning up the heat and caramelising and stirring for 15 minutes. This is an utter, utter lie and should be ignored at all costs. It should suggest softening for 20 minutes, then caramelising for 45-60 minutes. Of course, such a lengthy preparation is likely to deter everyone who ever might have considered making the recipe, because they’d need to start making dinner around the same time they eat lunch. The result of this lie was that I stood at a cooker, wondering why after 15 minutes of caramelising and stirring, my onions looked abso-sodding-lutely nothing like the beauteous dark onions adorning the picture on the opposing page.

You see caramelising onions is another thing that just can’t be rushed. You can’t do it quickly, God created it as a process that’s slow and you’ll just have to learn to deal with that. In fact, embrace it. Nobody wins in the delusion of cooking times. Undercooked onions impart a different flavour to a dish compared to their carefully nurtured counterparts. In the caramelising case detailed above, I began to think it was a simply a rubbish recipe, until I learned of the overly judicious mitigation of cooking times. Once I realised what had occurred, I had another go, allowing plenty of time for this stage and created a wonderful dish with deep, rich, sweet caramelised onions, which was a joy. The only way to circumvent this timescale is to add more sugar or balsamic vinegar to bump up the flavour, i.e. cheat.

Many people might not be as persistent as myself and just write off an experience as a ‘bad’ recipe, which in some ways it is, for deceiving and misleading the reader and not providing all of the information required to create a great outcome. However with a minor tweak, this ‘bad’ recipe turns into a joy. A good recipe would be an honest instruction that ensures the reader gets the best outcome if they follow the details of the recipe to the letter, which includes being honest about how to cook onions.

However, after reading this article, hopefully you will venture forth into the kitchen and the next time you see a recipe state “cook for 5 minutes until softened”, you will feel a knowing sense of culinary empowerment, safe in the knowledge despite what the author may have written, you definitely know your onions.

How to Cook Onions.

Here’s a very quick rundown of the main terms you will come across in relation to how to cook onions:

Sweat. Fried over a very low heat with the lid on, to create soft, buttery onions with no hint of browning or burning. Can take 20 minutes or more.
Sauté. Cook over a medium to high heat, stirring frequently to create cooked, light browned onions. Can take 10-20 minutes.
Soften, or Cook until translucent. See ‘Sweat’
Caramelised. Takes an hour or more over a medium heat with lots of stirring, often with oil, butter, sugar and salt added at the beginning of cooking.